The Black-headed Laughter is a large bird of the squad of plover gull families. Due to the critical reduction in the population of this species, the birds are listed in the Red Book of Russia. On the mineral lake Manych-Gudilo there is a reserve "Black Earth", in which the population of laughter in every way supported and restored. The lake system of reservoirs in this area is protected by international conventions. In this article, you will learn about what the laughter is, why it has a similar name, where it lives and how it nests. 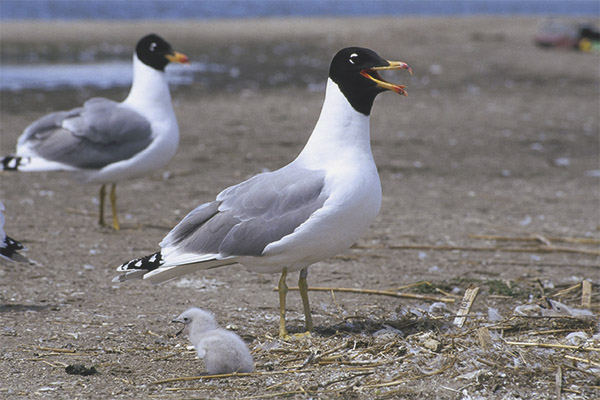 Laughter is one of the large gulls of the whole family. The average bird weight is about one and a half kilograms, length - 60 cm, wingspan can exceed one and a half meters.It is quite simple to recognize a bird among other birds - the laughter’s head has a shiny black color, the wings and upper back are smoky gray, and the belly and chest are white. The beak is bright orange with black patches. Sometimes it seems that the beak is simply tied with a black string. This is a description of an adult sexually mature bird. At a younger age, black-headed laughter does not have a black head at all - it is gray or smoky in it. Sometimes this creates particular problems in determining the species - it is difficult to identify the bird at a young age.

There are many legends around the name, although no one really knows why this silent bird was called a laughter. After all, even in English, the name of the bird translates as “big black-headed gull”. You can’t call the talkative laughter too - only occasionally it makes sounds resembling distantly "Ha-ha-ha" or multiple "Ay." Perhaps someone from the discoverers of this seemed to laugh.

For birds of this species, the presence of large and small water bodies in the vicinity is important, since it is the only source of food.Habitat in nature extends from the shores of the Crimea to the Great Lakes in Mongolia, from Chany to the southern part of the Caspian Sea. Throughout this territory the bird nests in small areas and zones, there is no common settlement. Large salt and fresh lakes, sea shoals, reservoirs in the steppe and desert are places where you can meet black-headed laughter.

The black-headed laughter, like other species of gulls, flies beautifully, is capable of floating in the air, only occasionally flapping its wings. On the water sits high, the bird does not dive to the depth. Laughs live colonies, quite numerous, in which up to 100 pairs of individuals. Sometimes other types of gulls are present in the colony. But they do not interbreed with each other, birds always prefer partners of their own species. The black-headed laughter is very careful, almost never lets a person close by. Most of the diet of laughter is fish - up to 70-80%. In addition to fish, the bird can eat insects, amphibians, small rodents and even chicks of other waterfowl. In most cases, the bird is sedentary; it flies away for wintering only if the reservoir freezes.

Black-headed Laughing reaches sexual maturity in the fourth year of life. Birds also nest in large colonies so that often the distance between the nests does not exceed a few meters. Often, laughter nesting with herring gulls. Nesting places are selected remote, without any vegetation, as a rule, these are rocky islands. Bird nests are built right on the ground, making small indentations on the shore. Inside the vegetation is lined - underwater or above ground. In a clutch, there are usually about 2-3 eggs of a gray, marsh or brown shade with a few patches. The female and male incubate the eggs in turn for 3-4 weeks, after which the chicks hatch one after another. The babies of the first days of life have white fluff, which gradually becomes gray. Chicks stand on the wing in about a month and a half. 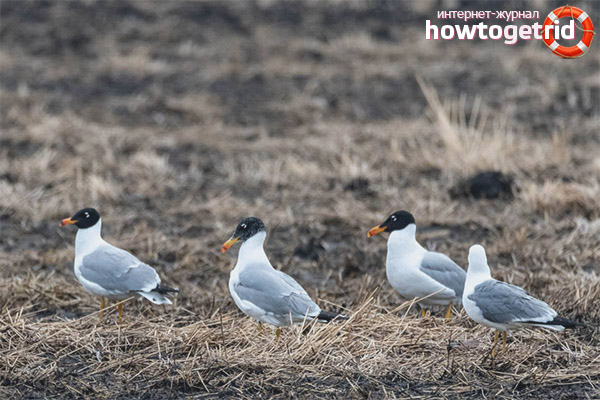 Black-headed laughter has poorly developed parental feelings. Birds often leave chicks to certain death only because they do not want to feed the babies and take care of them. Surprisingly, 80% of chicks simply do not survive.Kids are prone to infection, they can become prey to silver gulls, and even the relatives themselves often crush chicks in total confusion and crampedness. This is often observed in large colonies, when the density of nests is quite large. The birds of this species have developed an instinct for caring for chicks, which are combined into so-called “kindergartens”. That is, all the babies gather in a heap, adults do not divide them into friends and foes. Some birds fly away in search of food, the other part remains to look after the little ones and protect them from enemies. This allows you to give the viability of at least some part of the brood. On average, black-headed laughter lives 15 years.

Surprisingly, in many cultures, all types of gulls, and in particular, the black-headed gull is a symbol of feminine grief and maternal longing. It is enough to recall the legend of a woman who turned into a seagull moaning after grief after her beloved fisherman husband disappeared into the sea. The explanation for this lies in the tears of the gulls - they are so sad and depressing, as if the bird really suffers. A lot of seamen will be associated with a seagull, one of which says that seagulls gale on the coast to bad weather.But a large number of seagulls over the water promises a big catch, because the birds also get food in the sea.

The Black-headed Laughing was on the verge of extinction a few decades ago - bad ecology, poaching, and the collection of eggs contributed to this. Today the situation has improved, thanks to effective protective measures. Acting in the same spirit, mankind will still be able to save the population of black-headed laughter for future generations.