Fans of collecting mushrooms know a lot of the names of this amazing representative of the mushroom family. Golovach giant is famous for its incredible size, so in mycology it is often known as a giant raincoat or a giant Langermania. Due to the unusual “rounded cap” in the shape of the head, which is the fruit body of the fungus, mushroom pickers often call these representatives of the plant world very congruently — golovachami. Indeed, in nature, the shape of these mushrooms is very similar to the head. Another name for these mushrooms is “rain coat”, due to the fact that most of these giant mushrooms appear in a wooded area after long and heavy rains.

Characteristics of the giant head

Giant mushroom is considered to be edible, it belongs to the family of champignon mushrooms. In nature, giant raincoats can grow to incredible sizes. The diameter of a large head can be up to 35 centimeters in width, while the weight of the fungus can vary within 10 kg. There are cases when the mushroom pickers managed to detect a giant mushroom, even weighing up to 25 kg.

At first glance, the golovach resembles a giant mushroom champignon, but in reality the giant raincoat does not have either a mushroom cap or a thick leg. It has only a giant spherical fruit body. At the bottom of this rounded head grows a thin stem, which is a filamentous formation or a hypha of the fungus. During its growth, the giant golovach forms a fungus or mycorrhiza, and intertwines with the roots of a number of growing trees. The top of the mushroom cap is covered with thin white skin. When it begins to ripen, over time, its fruit body becomes brownish, yellow and even green.

It is believed that golovach yellow, green or brown shade is not suitable for food. Collect in a basket and eat such a mushroom is not worth it.It is best to eat the young fruits of golubchikov mushrooms, which have white fruits. It was at this time that the raincoat had the most delicious and snow-white heart. Inside the pulp of mushrooms is very similar to cotton wool. Young mushrooms have a distinctive, distinctive smell, and among the mushroom pickers, raincoats are giants famous for their unique taste. Fans of mushrooms and chefs point out that the golfer acquire a special and unique taste when frying in a frying pan. However, it is worth remembering that you need to try such a delicacy within 24 hours after the mushrooms have been harvested. At the end of the day, the giant mushroom becomes unsuitable for human consumption.

Also, lovers of gathering mushrooms should not be confused with a giant golovach poisonous relative - fake raincoat. This inedible mushroom looks very much like a giant raincoat, but it is very dangerous for health. These two fungi can be distinguished by some external signs, for example, the fruits of the crotch inside and outside have a darker color than that of a real head.

reddening umbrella - description of where the mushroom toxicity grows

It is not for nothing that the golubic mushrooms got their nickname because they are indisputable champions in heavy weight in the kingdom of edible mushrooms. When they first met in the forest, the mushroom pickers did not immediately realize that in front of them grows the real fruit body of a giant golubach. Giant raincoats cannot be found in the same area several times, they can appear on a specific territory and then disappear for a long period. Scientists call varieties of such “nomadic fungi” meteoric fungi. 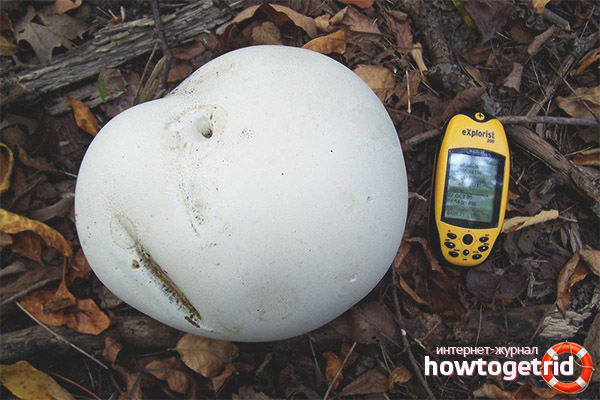 Golovachi can be called mushrooms alone, because, unlike their relatives, they do not grow in groups. Best of all, a giant slicker grows in soil rich in moisture, nitrogen and other nutrients. That is why often headaches can be found in places with high humidity. As a rule, they grow on the edges of mixed and deciduous forests, in damp lowlands of meadows and fields, wet ravines and steppes. Mushrooms grow after heavy rains, you can find them with the onset of June and until the beginning of October.

lattice red - description of where the poisonousness of the fungus grows

Useful properties of a giant raincoat

Fruits of mushrooms endowed with a very useful substance called calvacin. This miraculous substance has beneficial health properties, which is why it is often used in home medicine to treat kidneys, problems associated with leukemia and tumor formation. Pharmaceutical companies also use the healing properties of the fungus when creating medicines. From the spores of the raincoat create drugs for the treatment of tuberculosis, diabetes and asthma. Also, a giant mushroom is included in the vaccine, which treats for flu. This fungus is able to cleanse the body of toxins and radionuclides, its spores help to heal wounds. The healing properties of the giant rain can help patients with smallpox, laryngitis and overcome the development of the urticaria.

The giant mushroom raincoat will perfectly decorate the table of any hostess and add a touch of refinement to the menu. Mushroom really can be called a delicacy, endowed with a special taste and aroma. Fruits of the head are better to be eaten at a young age, while the pulp of the fungus retains its white color and elastic porous core.These mushrooms perfectly diversify the menu of any gourmet, because their fruits can be fried and even dried with the help of drying.

To prepare the mushroom, remove the shell, and cut the flesh itself into small layers. Pieces of mushrooms are well fried in breading, it gives them a special delicacy of taste. It is enough to dip the sliced ​​mushroom in a batter or breadcrumbs, after which it should be fried on both sides in oil.

In this case, cooks are not advised to experiment and cook the fruits of a giant head in water. After boiling, this mushroom absorbs a lot of moisture and becomes very unpleasant to the taste. However, a variety of this giant mushroom is very good drying. After that, the raincoat can be very easily used in other culinary recipes and added to different dishes.

Caesar mushroom - description of where the toxicity of the fungus grows