The bird is a little inferior in size to the domestic congener, and it has traded a warm house for the endless expanses of the tundra. Its numbers are steadily declining under the pressure of external changes, as the habitat changes. The harsh living conditions provoke a high mortality rate of young, but every year the geese stubbornly return to the coast of the Bering Sea, the cold waves of which they saw hatched from an egg.

The main difference between the goose - whitish from other relatives was his coloring. He seemed to be dressed in chain mail of small variegated links, and only the head and neck remained white. The blue tone with a gray tint creates an amazing contrast with a brown breast and a white head. Elegant plumage is not striking, but performs a protective function. The bird is difficult to see among the coastal stones and even harder to see on the glistening sea waves.The weight of an adult individual varies between 2.5 kg, the short thick neck has become a distinctive feature of the species. There is no particular difference between the color of the male and the female.

Geese live in Chukotka, Alaska. Several colonies settled on the islands of St. Lawrence. Such a limited habitat was one of the reasons for the gradual reduction of the species population. In winter, the birds fly away to the Kuril, Aleutian and Commander Islands.

The geese menu includes vegetable food, they eat leaves, branches, roots, inflorescences. Willingly eat mussels and crustaceans. For the production of food, they immerse their heads in the water and carefully look out for delicacies. Sometimes ornithologists observe an interesting picture when a goose forms a hole in shallow water with a beak and paws and catches trapped mollusks from it.

Couples are created for life or until the death of one of the partners. The choice of the site and the construction of the nest is the female. The male is assigned the role of guard and protector of the territory. He aggressively reacts to any creature that dares to violate the borders of the territory, opens his wings, hisses menacingly and steps on the enemy.For nesting and moulting, they incorporate low-grass tundra, coastal bays, lagoons, and the sea coastal zone.

In the nest there are from 3 to 8 eggs, masonry with 5 eggs most often occurs. A female of 24-25 days incubates chicks, allowing herself to stretch her legs for only a few minutes, practically without departing from the nest. By the time the goslings appear, she loses a fifth of her weight. Chicks matures for a long time, so those who appeared early will get stronger and survive the winter better. Up to a month, sometimes longer, goslings are covered with thick grayish fluff, they fully rely on the 47th day of life. But they begin to fly early, about 2 months after birth.

The family does not stay up long in the nest, preferring to move closer to the marshy shoals of the coastal zone for 10 days, there is more and safer food there. Geese fleeing from enemies in the water. Foxes, owls, eagles, golden eagles, arctic foxes, and minks cannot reach there.

The first winter, the chicks do not move far away from their parents and together return to the nesting sites. Here their paths diverge, since an adult female begins to lay eggs only at 3 - 4 years of age, and a formed pair will not tolerate on its territory during the breeding season anybody, even grown children.

Despite the fact that the bird carefully guards the nest, birds of other species or a neighboring pair of geese are often thrown at it. The female picks it up and incubates with her. 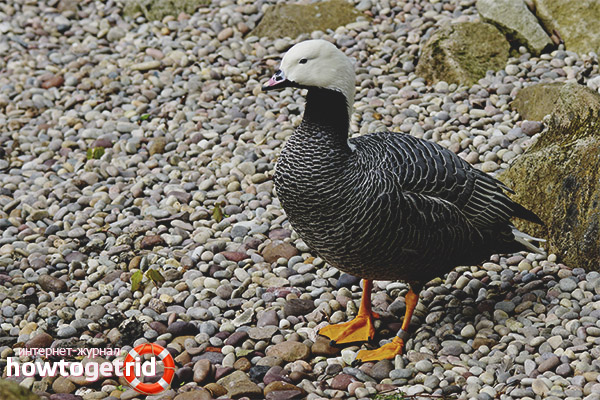 The geese, the whites, do not hide from the observers and calmly treat strangers until they encroach on their territory. Therefore, it is known about them that:

Goose-belos is listed in the Red Book, in nature its number is gradually reduced. This handsome man is protected by the law and there is hope that the look will remain.