How to get rid of the fear of a fight

Fear of fighting arises in many people. And this is absolutely normal - a person has a sense of self-preservation - a natural animal feeling to save his life and his health. Of course, the true “diplomat” will try to avoid the assault on the end, resolving all the problems orally. However, adequate interlocutors do not always come across. Some intend to want to hurt you. And in this case it is important to be able to stand up for yourself and your loved ones. 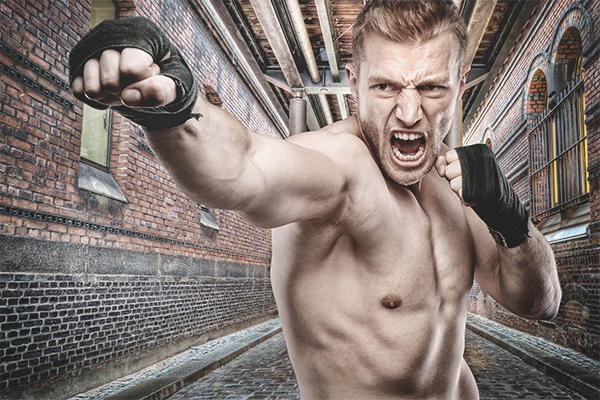 It's all in the head

Look at some categories of people and animals. Why in nature is the most fierce rival considered a mother, whose children have been offended? Try only to touch a little wolf or a tiger cub, a wolf or a tigress will tear you to shreds. Even the mother of a simple sparrow will try to peck out your eyes if you touch her offspring. It is the same with man. Try to hurt the child, and the woman will become fierce and violent, although in life she is a sweet and calm person. This is the maternal instinct.In her head installation - to protect the child at any cost. Therefore, to cope with the fears of a fight, you need to give yourself the right psychological attitude.

In the book of one scientist who writes about auto-suggestion, it is told about one interesting experiment. In the ordinary gym of martial arts practiced average fighters. A district champion was supposed to visit them, but they didn't know him in the eyes. The coach decided to conduct an experiment. He told one of his fighters that, say, one upstart, an ignoramus, a boaster, who imagines himself as if he can beat you in sparring, will arrive now. That is, he settled in the head of his fighter that he will be able to defeat the “novice” without special efforts. The champion, the coach, said that the man with whom he will fight now is a very talented, budding guy. That is, he placed doubt in the head of the district champion. Such a psychological attitude allowed the young fighter to fight without fear. But the champion, on the contrary, was psychologically difficult, and he lost. When the winning fighter was told who he won, he was shocked and admitted that if he knew who he fought with, he would not be able to win.

Therefore, if you can properly tune in before a fight, this is almost half the successful outcome of the case. Do not be afraid of the person standing in front of you, he is the same as you.

14 ways to get rid of fear and anxiety

How to get rid of the fear of a fight

Fear is a natural animal feeling that occurs when life and health are threatened.However, fear often prevents us from defending ourselves and our loved ones. Do not be afraid, because human capabilities are endless. Sometimes a simple rag can be so infuriating that it will give odds to any athlete. Therefore, everything is in our head. Do not think that you will win - know this. And you will succeed.

Video: how to overcome the fear of a fight