Hares live throughout the Earth, with the exception of cold inhospitable Antarctica. These animals live in almost all continents, there are they in North American. In the prairies and savannas of the United States, as many as six species live. About one of them - the American hare, and will be discussed. 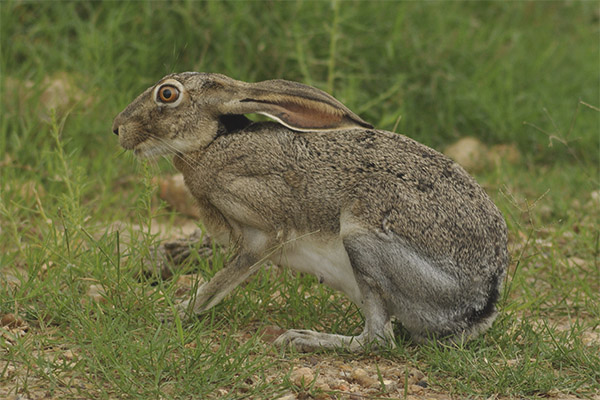 The black-tailed (also called the American hare or leather rabbit) hare, like all other species of relatives, has long ears. Endowed with powerful hind limbs, the feet of which are pubescent with a thick layer of fur. This species is the largest species living on the mainland. Body length - 47-64 centimeters, weighs from one and a half to three kilograms. Females are slightly larger, but no longer differ in anything. Black tail length from 5 to 10 centimeters. Above the body has a brown or grayish-brown color, the belly is whitish. On the back is a dark stripe.

The biggest difference between the black-tailed hare - ears. Not very long (about 13 centimeters), but rather wide. Their width allows you to dump excess heat into the surrounding air and not to overheat.

They live throughout the United States of America and partly in Mexico. In the American territory are distributed north of other species. Found in deserts, forests, dry steppes and grass-rich plains. It also settles in the hills and can live in the mountains, rising to three and a half thousand meters, and the presence of forest in the highlands is optional.

Active shows at night and shortly before dawn. The day is spent relaxing in the shade of the bushes. By lifestyle - a loner, does not form a pack. Together can only gather during feeding.

Saves the masking body color and the ability to run fast (it achieves speed up to 60 kilometers per hour) from hares predators. Among the other advantages of the American hare is the ability to jump from a place, being on its hind legs, for six meters.

Although they run at an enviable speed, they do not need migrations, they live constantly in one place.So, many of the animals caught and released after 2 years were caught in the same area, only 500-600 meters north or south. 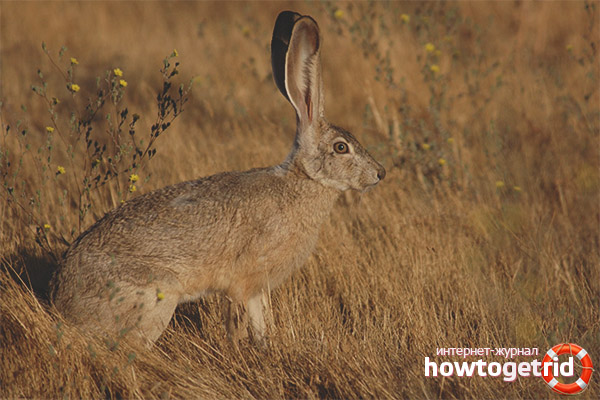 Black-tailed hares feed exclusively on plant food. They eat herbs, leaves, buds, flowers - in general, all the components of plants. When the green part is missing, the branches and bark of the trees begin to be eaten. Do not pass by cacti, happy to eat them. They eat spikes growing in desert areas. Since American hares constantly feel the need for an influx of vitamins and microelements from plant foods, animals eat unceasingly, interrupting the process only during sleep. Eats a rabbit relative to its low body weight a lot - about 20 kilograms of food per day.

This type of hares does not need water - they get all the necessary moisture from the green plants that are destroyed during the day.

The breeding season is very long - in Arizona it starts in December and lasts until September, and in the southern regions (California, Kansas) it lasts from the beginning of January to August. The hare gives birth quite often - three times, and sometimes four times a year.Pregnancy lasts 41-48 days, up to six small hares are born, most often three or four. Children are born already covered with hair and with open sighted eyes. For three or four days, the mother takes care of the offspring, nurses and then leaves the children, and they begin to continue their lives on their own.

The population of this species is quite numerous, mainly its density is about one hundred rabbits per square kilometer. The number of black-tailed hares constantly fluctuates, for 10 years the number can vary from minimum to maximum. Shooting animals and epidemics of life-carrying diseases contribute to this. One day, a tularemia epidemic killed more than 90 percent of the species.

The black-tailed hare, due to its wide distribution, is in the first place among similar specimens on sabotage. It harms not only in forests and fields, but also in man-owned gardens and cultivated vegetable gardens. It is often hunted, especially by Indians. Mostly hunters are interested in meat. Fur is of no interest to anyone, because it is not nosy and very quickly becomes unusable.A hare skin is manufactured and used in the haberdashery industry.

In captivity, the black-tailed hare lives about 5-6 years, and in the wild this period is less - many animals die, becoming a victim of hunters, predators, diseases, or for other reasons.