Karaket - description of the breed and character of the cat

The Karakat breed was bred by mixing a wild Caracal and a domestic Bengal cat. An amazing hybrid that combines the best qualities of its parents, it combines brutality and calm disposition. 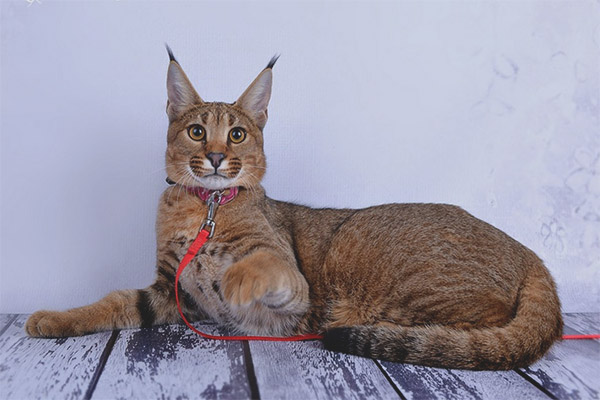 The appearance of this rare breed happened not so long ago, its representatives are greatly appreciated by lovers of everything exotic. Not everyone can become the owner of such an animal, because the kitten is very expensive, the calculation is carried out in millions of rubles.

A bit of history

For the first time, hybrid kittens from a wild cat and a domestic cat began to be mentioned in the 80s of the previous century, when a stray cat fell into a cage to a male Caracal, which occurred at the Moscow Zoo. As a result, a kitten was born, whose appearance was more like a lynx, and the behavior of a simple domestic cat.Further breeding was not possible because it was a hybrid male, and such animals cannot have offspring until the fifth generation.

Once again, breeders from the USA and Germany made an attempt to cross a male Caracal with a domesticated cat 10 years later, but again, attempts failed.

Later, good luck was attempted by the Russian breeder Irina Nazarova, whose merit was the breeding of hybrids until 2016, which inherited the look of a wild beast from its ancestors, but were characterized by a good disposition and ability to be trained. The breed was given the name "caraket".

Representatives of the breed have a striking unusual appearance. A lot of it from the wild Caracal, for example, a kind of brush at the ends of the ears.

During the observation of several generations of representatives of this breed, you can experience an incredible surprise on how their appearance changes. Babies born in the first generation carry the same domestic gene and wild cat gene.

With each subsequent generation, the hybrids will begin to take on a more domesticated appearance and docile disposition, while the color of the hair of the caracals and the brush on the ears will be preserved.

caracal - description of the breed and character of the cat

Such cats have an independent and independent character. They are obedient, affectionate, but not intrusive. They have a lot of energy, they love to move and play. 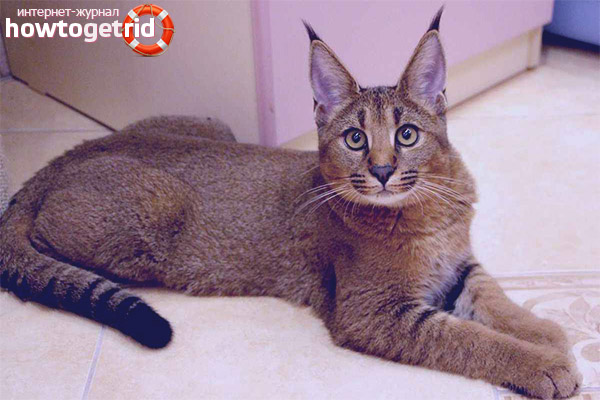 Representatives of this breed are wonderful hunters, because their ancestors were large predatory animals. Most owners notice that cats are incredibly bouncy. Jumping to a height of three meters is not a problem for them. Karakety have a well-developed ear, they are able to hear a quiet rustling at a distance of several tens of meters.

Such cats are very smart. In a short time they get used to their name and begin to respond to it, are trained, they can memorize simple tricks, they strictly follow the rules established in the family.

Although the cats have a rather formidable appearance and impressive dimensions, keeping them in the house is not dangerous. They showed themselves as good animals with a high level of intelligence. Although in some cases it does not do without stubbornness and whims. But no need to worry about this, such a temper in cats.

In relation to other pets, caraquets are not aggressive, but, on the contrary, show interest and call them into their merry entertainment.

The content of representatives of this breed in the conditions of the apartment is not appropriate. The blood of a wild animal that flows in their veins makes itself felt. Such cats prefer large spaces, like to move freely. The best solution would be a country house, where the animal will be able to walk independently. 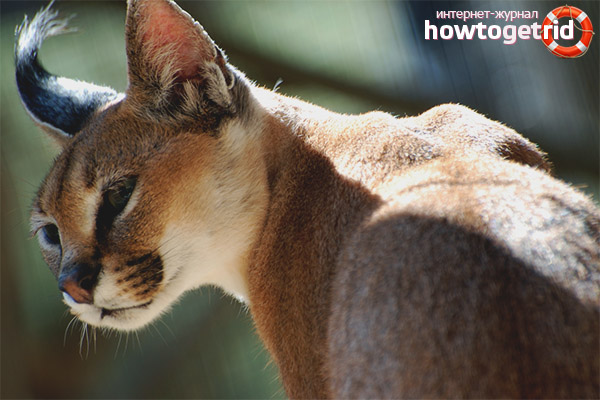 Karakets have a fairly well developed and strong digestive system. They inherited this from wild ancestors, for whom it was normal to digest raw meat, bones, and skins.

The menu of your pet should include natural products. The diet should consist of raw lean meat (veal, beef, turkey). In addition, it is necessary to feed him with fish, give vitamins, especially young cats.

Since karaketa are rather large animals, they eat approximately twice as much as ordinary cats. It is necessary that the daily feed volume was 5-10 percent of the pet's body weight.

Representing a descendant of a wild cat, karaket has good health and strong immunity. Over the years of breeding, not a single case of animal infection with the most common diseases in cats was found.

There is no need to talk about diseases of a genetic nature at the moment, since very little time has passed since the beginning of the formation of the breed.

Cost where to purchase

If you know how difficult it is to breed this exotic breed, there is no surprise about the fact that kittens are quite expensive, very few people can afford, pleasure.

Also, the cost is influenced by the fact that the breed is relatively new, so there are few more individuals.

An average kitten can cost from one to one and a half million rubles, while the owner will not have the right to breed him in the future.