There is such a profession in some zoos - scratching a koala. But it’s not so easy to get such a position, who will refuse to bother with such a nice and good-natured animal, deriving pleasure from it, and receiving an additional salary ?! 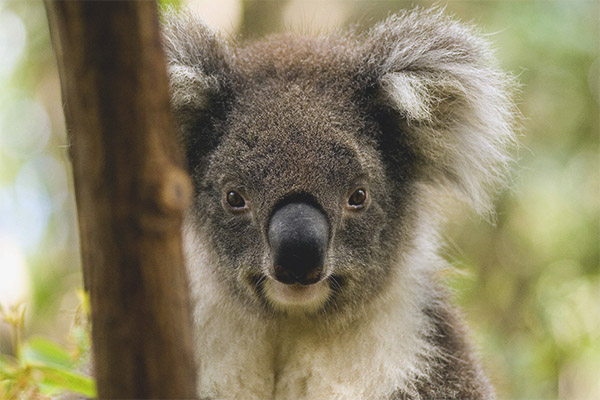 Koala bears differ significantly from their fellow brown and polar bears. It’s not for nothing that they are called tree bears because they are inhabitants of eucalyptus trees. Yes, and they belong to the genus of marsupials, and are not related to other bears. Koalas belong to the koal family, and only another species can be remotely attributed to a close relative - this is a wombat.

Translated from the local dialect, the koala means “non-drinking water”. But maybe the bear doesn’t drink large quantities of water, but with appetite it licks dew that is collected in large quantities on eucalyptus leaves.

Koala bears are medium sized animals. The muzzle is flat, the eyes are small, it seems that the animal is a little weak-eyed. The dark nose is also slightly flattened, but it is rather large and leathery. The teeth intended for the processing of hard leaves are strong, especially the incisors with their sharp edges stand out. The ears are rounded, very wide apart, relatively large, have long hair at the edges.

The tail is very reminiscent of a bear: the same short, almost invisible.

All limbs are elongated, because you have to constantly move through the trees. Therefore, the hands of the upper paws consist of several parts - for ease of movement. Paws lower shorter, and they are not as strong.

Claws of a tree bear have a number of advantages: both long and curved by an arc. Thanks to these qualities, it is very convenient to hold onto a branch, and you can hold up to 15 kg.

What scientists were very surprised at one time was the fingerprint of an animal. It turned out that in all respects it corresponds to the imprint of a human. There is another unusual fact, and it relates to the structure of the genital organs. The female has two whole vagina and two uterus.Accordingly, the males have two penises.

But the brain of the animal is amazingly small in relation to the total mass - only 0.02 percent. Presumably, the ancestors of this species were more “clever”, having a larger brain volume, but since the life of the koala does not imply great brain activity, similar evolutionary changes have occurred. However, this does not diminish sympathy for him.

The hair of the animal is short and thick, very pleasant to the touch. By the way, this quality of it led to the fact that animals were massively destroyed by people because of the attractiveness of fur. The coat color is usually smoky gray, and on the abdomen is much lighter, there may also be a brownish tint.

The marsupial bear is a typical inhabitant of Australia. And its habitat is entirely dependent on the presence of eucalyptus trees, which are both a house, and a dining room, and a resting place. People, of course, are trying to increase the distribution of koalas, but over time it became clear that only the presence of eucalyptus trees will help the normal life of animals, and not brought from far away leaves. 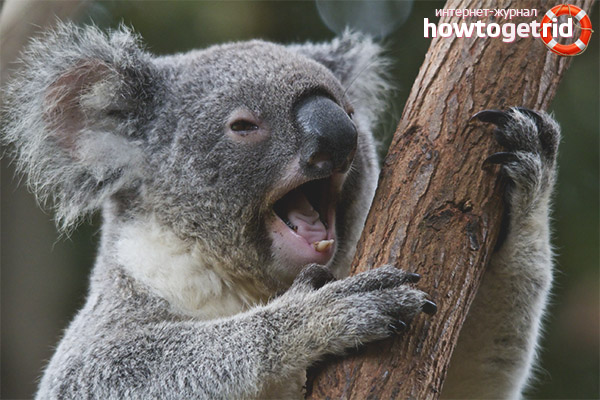 Tree bears are home to eucalyptus forests only, as they are inextricably linked to this tree by the food chain.

For a long time, researchers could not understand how this happens: the poisonous leaves of a tree can kill most animals, even small quantities should be eaten, and for koalas this is a normal diet.

And they managed to identify a number of features that distinguish koalas from other animals so much:

There are other receptors in the body that allow you to clearly assess the nutritional value of the plant.

The whole danger of eucalyptus is that it contains a large amount of prussic acid, which is toxic to living organisms. But koalas are the least afraid of its poisonous effects. They also have cases of poisoning, but they can in different seasons choose the type of plant that has a much lower content of harmful acid.Massive koala poisoning was recorded only when, for whatever reason, for example, due to weather conditions, they could not change plants.

For food, a marsupial bear chooses leaves and very young shoots, only the best, but not because he is such a gourmet. Everything is explained much easier: eucalyptus leaves contain very few calories, because the most fleshy are needed for nutrition, so that the animal does not lose energy and strength to process plant foods. Of course, after a very satisfying meal, the animal needs a rest period of at least 22 hours, since all the processes in it take place in an inhibited rhythm. It is good that a person does not have such needs, otherwise there would never have been any progress on Earth.

Koalas are drunk very rarely, mostly they have enough dew from the leaves.

Life koalas passes as if in slow motion. They sit in one pose or sleep. Psychologists could say that these creatures are phlegmatic. When they feel hungry, they do not need to hunt for a long time, setting in ambush, or having difficulty getting food. She is always there, it is worth making one small effort - turn your head and pick a leaf from a tree, and then chew it slowly as well. 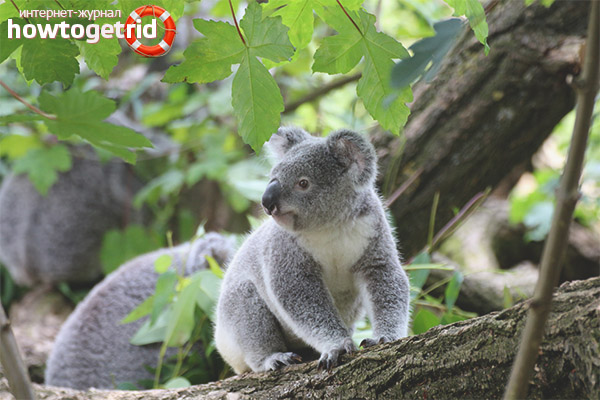 If there is a desire to move to a nearby tree, the animal simply reaches it with tenacious paws. But, if the distance is large, the koala slowly descends and overcomes the distance along the ground. Its slowness often becomes the cause of death, when the animal goes on a busy road. On average, the life span of tree bears is about 18 years.

However, koalas are not always so slow. If they feel that life is in danger, they can jump over a branch or another tree quickly and dexterously. They also know how to swim, and not bad enough. But to dare to sail them can only push an exceptional case, they themselves would never dare to go into the water.

Koalam are very lucky that eucalyptus trees scare animals, but on the ground they have enough enemies. Domestic dogs and dingoes are especially dangerous. But still koalas are saturated with the specific smell of eucalyptus, therefore it does not seduce animals.

But misfortunes can come from the other side. These animals suffer from diseases. They may have a cold or conjunctivitis.In captivity, there were cases when animals died from complications due to diseases. And it is difficult to treat them in the first place because they endure the anesthesia extremely difficult.

A large percentage of koalas die if the forest zone ignites. But the state of Australia does not leave animals in trouble. There are even rehabilitation centers with veterinary care, so there is hope that these friendly and very cute animals will not disappear.

The period of mating and procreation

Koals can make different sounds. But they do it very rarely and only in exceptional situations: if it is very scary, the male was abandoned by the alleged chosen one or the animal was injured and hurt. In another case, the koala can scream loudly when it comes to attracting a female, because she will choose the male who is superior in sound to everyone else. 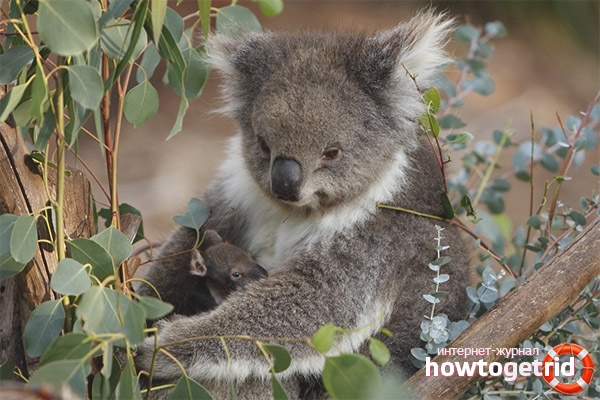 These animals are not required to live in a team, and they do not need a clearly defined individual space for which they would have to fight. But when the mating season comes, everything changes in the life of sluggish animals.Then laziness is transferred to other times, animals create groups, in each of which a male is necessarily present and from three to five females.

To attract brides, the male makes the following movements: in the trees he begins to rub his chest against vegetation, leaving the most unusual smell on the branches. This specific aroma is necessarily considered by females. And only they can be seduced by a similar scent, for other animals it is rather repulsive. And then the male climbs up to the top of the tree and starts making loud low sounds, more like a roar.

Females at this time listen to the call-up sounds and sniff left tracks. Having chosen a more worthy candidate, they visit the male. Mating occurs on the tree.

Carrying babies lasts a short time - 30–35 days. Kids appear very small, weigh no more than 5 grams, and the length of the body is only 2 cm. One cub is born more often, more rarely several. Koalas can not boast of fertility. Statistics state that females are always born more.

All their early childhood, the children are sitting in the bag of mothers, feeding on milk. By the way, the bag, unlike other marsupials,only opens back.

Growing up and emboldened young eventually travel on the back of the parent, clinging tenderly to her fur. But this time, the mother spends on it to teach kids different tricks for survival, lays in them all the vital foundations. If danger looms ahead, they either hide in a bag, but they can also hang on the wool.

After about 30 weeks, a new diet begins, a bit unusual. Mama-koala feeds its excrement. They are very soft and liquid. This kind of food is necessary so that later, throughout life, the digestion process is properly debugged due to the fact that the animal eats eucalyptus, which has the ability to poison the body. With the help of already processed mom's food, a kind of gruel, which contains semi-digested leaves and sprouts, the baby's intestines are filled with necessary microorganisms, and then they will help to perceive such complex food for processing. Well, you can once again admire nature - as she has foreseen everything.

If at a young age to separate a puppy from a parent, he perceives such a loss very hard, very sad and crying.

When a year goes by, older children behave differently.Females leave their mothers in search of their own shelter, and immediately get used to living independently. But males are less fit. With mom, they live another year or a few years. But only until full ripening occurred. That's when they finally part, and this is already a real male who is ready to continue the race.

The koalas reproduce only once every two years.