Turtle doves are classified as pigeon-like, belonging to the pigeon family. The length of the body of this bird reaches 33 centimeters, and the width of its wingspan reaches 55 centimeters. The maximum body weight of an adult individual is 210 grams. 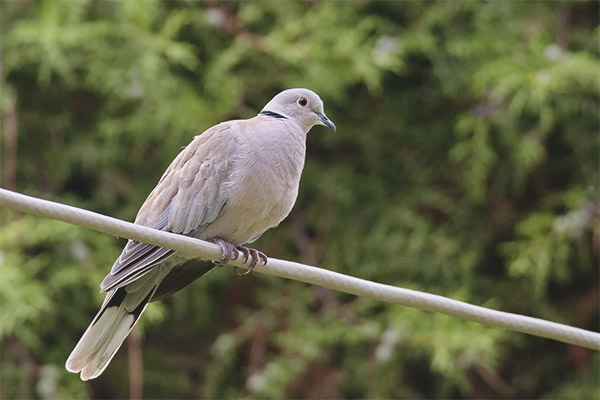 On the back of the turtle-dove and in the upper part of the wings, the plumage is colored in a bluish-brown hue, and in the lower part of her body the plumage is colored in pink-bluish tones. A distinctive feature of this bird is the white plumage of the tip of the tail and the black half ring located on its neck. On the fly, this member of the pigeon family clearly has white plumage, which paints the lower part of the tail, and the wing feathers of wings are presented in black.

The flight pattern of the ringed turtle dove is distinguished by its ease and speed.Being on the ground, the birds prefer to spend time in continuous communication, consisting of repetitive monotonous sounds, returning to the nest, they report their approach with a short piercing cry. Today, turtle doves can be called urban dwellers, without fear of taking neighbors with people. They can easily be found in city parks or squares, on boulevards and squares. It is hard to imagine that by its origin it is a forest bird.

In the recent past, the ringed turtle dove could be found in forests located in northern Africa, as well as in Asia Minor, and it also lived in the southern regions of the Asian continent. With the advent of the 20th century, these inconspicuous pigeons were widely distributed, it is noteworthy that in the new territories they were not attracted to forests, but to the neighborhood with places of active human activity. In winter, they prefer to keep large flocks, choosing places where it is easy to get hold of grain.

Any farm, nursery, menagerie, territory of the granary, grain processing complex or poultry farm is suitable for this.The representatives of this species, who have chosen the new habitat in the central part of Europe, get along perfectly in any settlements, in close proximity to humans.

Ringed turtle doves are characteristic representatives of synanthropic birds, their lifestyle is inseparably linked with human economic activity. The habitat of these birds intertwined with the location of cities and rural areas inhabited by people.

As a feed for turtle doves, various cereals or seeds of agricultural plants are used, and they also do not refuse from seeds of wild-growing cereals and grasses. Young green sprouts of many plants, their buds and inflorescences, even berries and some fruits are also suitable for turtle doves. In addition, they willingly eat the larvae of many insects, land species of snails and earthworms, which are especially actively collected in the breeding season.

The food that the turtle-dove swallows swallows initially enters the so-called goiter, it consists of two processes of the esophageal tube,It serves as a preliminary link in the poultry digestive system. Having stuffed his goiter thoroughly, the bird is removed to a safe place for unhurried assimilation of the received portion. It is noteworthy that for more efficient processing of grain in the poultry stomach, pigeons have to swallow pebbles of small size.

The period of breeding offspring

Ringed turtle doves that live in Europe have a long nesting period, it begins with the arrival of March and may last until the end of October. Some individuals are capable of breeding even in the winter time. With lucky circumstances, when there are enough safe areas for nesting and there is no shortage of food, turtle-doves living in the eastern part of Europe can reproduce their offspring all year round, in the manner of domestic birds. 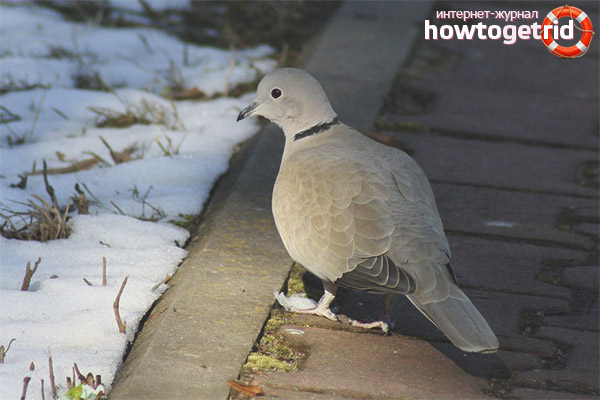 In the mating season, the males use peculiar flight figures to attract females. Taking off into the air, almost at a vertical angle, “air acrobats” descend along a certain trajectory, outlining in the sky an imaginary spiral, each coil of which is greater than the previous one.This performance is accompanied by a melodious song called pigeon cooing.

Having lowered to the ground, the enthusiastic gentlemen violate the second part of the ceremonial presentation. Getting closer to his darling, the male begins vigorous turns, giving out gallant bows and showing his dispersed plumage in all its glory. Having reached an agreement, the birds embark on an obligatory rite, they thoroughly clean each other's plumage, this ceremony is so important for them that they can continue these activities for several hours without a break.

Both individuals take part in the nest device. It is noteworthy that the prey of all kinds of twigs and stems of dry grass used as the main building material, is engaged exclusively in the male. But in the role of the "architect" is the female, she does not trust him in such a responsible mission. The turtle-dove nest has a cup-shaped form.

In the laying of turtle dove, as a rule, there are two small eggs of white color. In the incubation of offspring, both parents take part, at night the female takes over on duty, and in the afternoon these duties are assigned to the male.The incubation period of these birds lasts about 15 days, and, always, the first chick appears a couple of days before the second. Ringed turtle doves contain their chicks on a special diet, this type of food is called "bird's milk", it consists of a partially digested portion of parents densely supplied with secretion of glands located in the craw of the bird.

On the wing, young turtle doves become very fast, they get their first flight experience already at two weeks of age. If conditions are favorable, then a pair of these pigeons can grow 4 broods per year.

Ringed turtle doves are not afraid of rain at all, not paying attention to other birds, they continue to remain under falling drops, perceiving this procedure as a natural soul.

The migratory dove, which was distantly related to the turtle dove, was one of the most common bird populations found on the North American continent in the late 19th century. The colonies of these birds located their nesting sites on an area of ​​2,200 kilometers within the territory of the state of Wisconsin, and about 136 million individuals gathered here every year. Ultimately, wild birds were completely exterminated by man.

The so-called pigeon "bird's milk" is used in these birds not only when feeding chicks. During the courtship period, the male presents a similar delicacy to his chosen one. The special composition of this drug acts as a catalyst for the female libido.