Pygmy Corridor - care and maintenance in an aquarium

The pygmy corridor is a miniature brisk fish, which is the smallest representative of aquarium inhabitants belonging to the catfish. The size of this catfish do not exceed two centimeters. Like most of their relatives - corydoras pygmaeus is a peace-loving bottom fish living in small flocks. 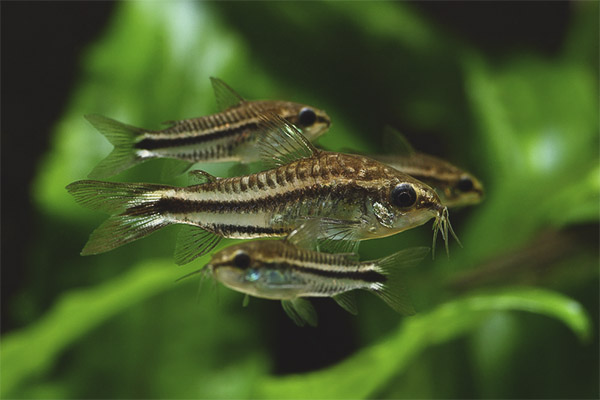 Living in the wild

The native habitat of the catfish is Brazil. The most preferable for the catfish are such places: skiffs, tributaries of the reservoirs (Rio Madeira river). Most often, this small fish can be found in the flooded roots of plants and among aquatic vegetation; the catfish moves under natural conditions in fairly large flocks.

As mentioned above, the catfish pygmy is a rather small fish of the catfish family, which has a slightly elongated body shape, with sides equipped with protection in the form of thin bone plates.The main feature of catfish is in fairly well developed pectoral and pelvic fins. At the same time, a rather long and sharp ray is located on the pectoral fin. The shape of the caudal fin is two-bladed. On the jaws of the fish there are several pairs of antennae.

Corridor pygmy has a delicate grayish-olive color. A black stripe is located along the entire length of the fish, ending at the tail with a dark spot of a round shape. Catfish fins - transparent.

As a rule, females are slightly larger than males, while the line of the belly has a more curved shape. Fish can be distinguished from each other by the characteristic feature of the dorsal fin - in the males it is pointed, in females it is rounded.

tetra von rio - care and maintenance in an aquarium

Somik Koridoras is a schooling fish, therefore, deciding to have such an aquarium inhabitant, you should take care of its maintenance conditions. For a small flock of catfish there will be quite enough an aquarium, the volume of which should accommodate from 50 to 70 liters. Also, we should not forget about the necessary parameters of water, as close as possible to natural: the water temperature should be in the range from 22 to 26 degrees, with a pH of 6-8 and hardness indicators: 2-25 dGH.

Best for catfish pygmies to organize a dim lighting.You should also take care of the presence of a sufficiently large number of aquatic plants in which this little fish loves to live. For decoration of the aquarium, snag and other secluded shelters are perfect for a miniature catfish.

The ideal solution would be to recreate the natural conditions of the Amazon, which today is a real biotope among owners of aquarium fish.

I would also like to remind that the use of snags, a large number of plants and fallen leaves in the aquarium can stain its water, the latter will become the characteristic tea color. This should not be a cause for concern, since for the catfish of this species, such water is a natural habitat.

red-tailed catfish - care and maintenance in the aquarium

In nutrition, the smallest catfish in the world are quite unpretentious, as they calmly eat both natural, frozen and artificial food, which are in large quantities offered at specialized points of sale. Nevertheless, choosing food for the corridors, it should be borne in mind that these fish have not only a miniature body, but also a very small mouth.

In order to achieve the growth of fish to the maximum size and improve color - regularly feed catfish daphnia and Artemia.

With whom is the pygmy corridor compatible 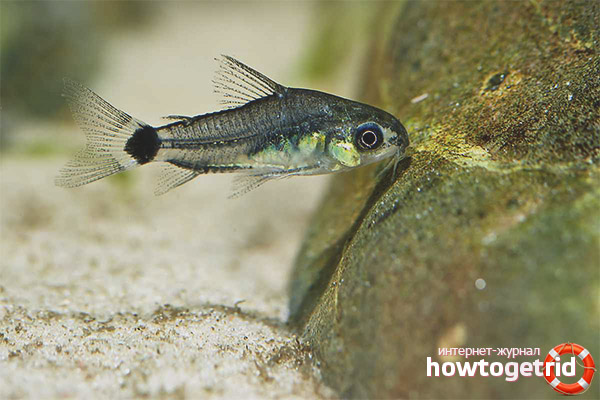 Somik pygmy is a very peaceful and calm fish, however, it is not suitable for keeping in every aquarium. As a rule, predatory and larger fish often consider a small catfish as their living food. Therefore, the choice of neighbors for the corridor should be approached with extreme caution.

Note that such popular inhabitants of domestic aquariums, like gourami and scalar, also pose a danger to pygmy catfish, not to mention other fish, including representatives of catfish.

Small-sized shrimps, as well as small carp and haracin, will be excellent neighbors for pygmies. Other small schooling fishes (for example, neons or rhodostomoses) are also suitable for sharing.

Recall that in the conditions of wildlife, the pygmy corridors live in flocks, therefore, to get such pets should be in an amount of not less than 10-15 individuals. Such a decision will help the little catfish to feel much more confident, while in the water a flock of several Pygmy Corridors looks very beautiful and spectacular.It should also be noted that somiki pygmies, unlike most relatives, prefer middle layers of water for the main pastime.

glass perch - care and maintenance in an aquarium

The breeding of a pygmy catfish is a fairly simple and easy process for its owner. The main difficulty in this business is the direct cultivation of fry, since they are very tiny in size.

The main incentive for spawning is the substitution of water. Carried gravy more cold. If females are ready, spawning begins. At one time, the Pygmy catfish can produce up to 100 eggs, as a rule, this is influenced by the age of the individual, as well as the conditions of detention. The duration of incubation of eggs is about 3-4 days.

Caviar laying by catfish samochki is made on the glass of the aquarium, after which it is necessary to remove the producers from it, as they can simply eat their future offspring. You should also pay attention to the eggs, if some of them appeared white bloom, they are immediately removed in order to avoid the spread of infection by fungus.For feeding the fry used ciliates, egg yolk.

Iriaterina Werner - care and maintenance in an aquarium