Kulans belong to the category of animals that admire with their special beauty and unusual color, graceful rapid run, the ability to rest for a long time, not lying down on the ground. They have relatives, and above all these are zebras, donkeys and wild horses, that is, those who belong to the equipoped mammals of the equine family. 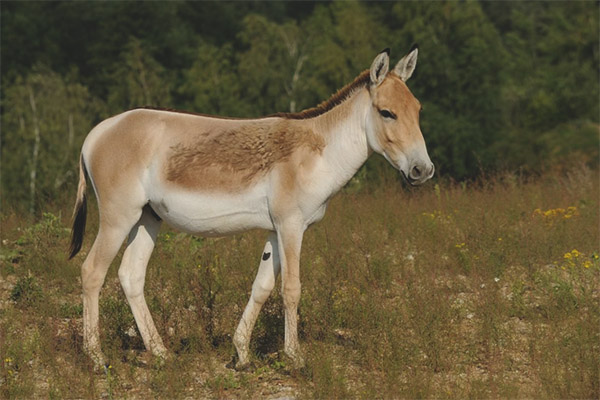 Kulana is often called jigetaem - this is the Mongolian version of the name of the animal. And due to the fact that it has a lot in common both from the horse and from the donkey, many people call him a semi-wilderness. But he can not be trained in any way, unlike donkeys, which still benefit people.

The length of the body is from 170 to 200 cm. At the withers, the height is on average up to 120-125 cm. The weight of an adult kulan can be from 120 kg, especially large ones up to 300 kg, and in this it differs from a domestic donkey - much larger.And if you compare it with a domestic horse, it loses much because of smaller head sizes and shorter ears: they are long in the kulan - from 17 to 25 cm. But in the kulan the legs are narrower and the hoofs are elongated.

These animals have mane, starting at the withers and ending at the ears. It is short and always stands straight. But the bangs, like fellow horse, is absent altogether. Muzzle elongated, eyes wide apart.

In the summer season, when it is hot, the wool of these animals is short and tight. When the cold comes, it becomes long, slightly twisting, so that the kulan does not freeze. Mother Nature took great care of these animals by presenting such wool and the circulatory system in such a way that the cataclysms of cold or hot pores are not terrible for animals.

The color of the Kulana can always be noticed, since its upper part of the body, head and neck are of a sandy color, and it can be of various shades, or red-brown. Those individuals that live in the foothill areas have a more pronounced color, and they are smaller compared to the plains - higher and very looking horses.

The torso in the lower part, the inner zones of the legs, and the near-tail part have a white tint. Contrasting are the mane and the tips of the ears - a dark brown color. A dark narrow strip passes along the midline of the back, which then passes over to the tail. The tail may be completely dark or with a brown tint, it is short - no more than 40 cm and thin, but it seems more voluminous due to a bunch of long hair and a black brush.

Males and females are difficult to distinguish in appearance; in this species of solopeds, sexual deformity is almost not expressed: females are always smaller.

Kulans have very strong limbs, so animals can run without stopping for a very long time. And with a speed exceeding 65 km / h. And even the baby, born three - four days ago, does not lag behind the parents, developing the rapidity that is amazing for this age - up to 40 km / h. High-speed running and high endurance allow you to escape from less agile predators. Kulans differ in that they jump perfectly. If it is necessary, they can overcome the height of 1.5 m and easily and gracefully, and also effortlessly jump from a 3-meter surface. Kulans, except for sick and old individuals, are always in good physical shape, active and energetic.

If earlier these animals lived in the Ukrainian steppes, in the northern regions of the Caucasus, in the virgin expanses of Kazakhstan, Turkmenistan, Uzbekistan, now the populations are declining, as the land is gradually plowing by man, and the virgin steppes are becoming smaller. 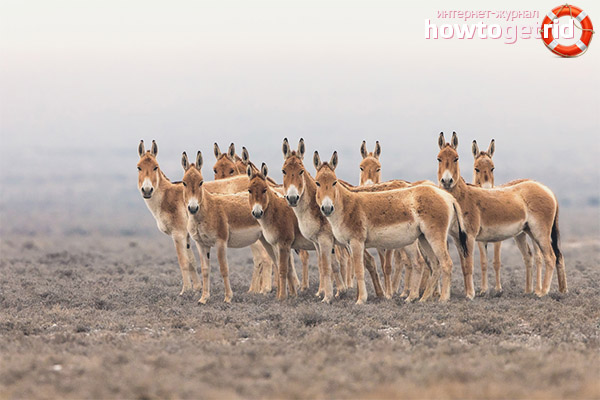 Kulan was preserved only because it is protected by people who are not indifferent to nature, strict protection. For them and other endangered species, reserves are being created, and it is almost impossible to see jigetais outside their territories.

If you really want to admire these animals, you should go to the southern regions of Transbaikalia or Western Siberia, Mongolia or Iran, Afghanistan or China, where there are dry flat deserts or semi-deserts, numerous hilly areas, but not where sandstone occupies a large area. Kulan also lives at an altitude of 300 - 600 m above the sea surface.

Kulans are herd animals. They can live in a community of 5 to 25 heads. They can rest in a lying position for no more than two hours, in winter much less, on average 30 minutes, and the rest of the time, if they are not busy searching for food and drink, they sleep quietly for up to 8 hours standing.

The leader is usually located a little away from everyone, also feeds separately, but still constantly monitors the surroundings - all of a sudden there will be enemies or other danger. The whole flock always knows that it is under reliable protection, and in the event of an alarm, their leader will warn everyone with a cry, which is very similar to the sounds made by a donkey. Everyone, even toddlers, instantly respond to the danger signal, quickly taking off, developing great speed, deftly jumping over obstacles.

If the leader does not fall predator or does not get sick, he will be able to manage the herd up to 10 years. Then you may appear younger and stronger, who wish to become a leader. Having shown his fighting qualities and strength, he becomes a recognized leader. The sad leader is waiting for the old leader: the herd, whom he so faithfully served, chases him away. 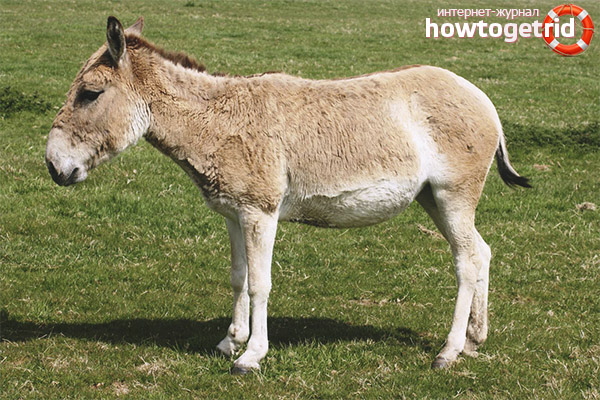 Wolves - this is a significant danger for dzhigetaev. After all, they are also very hardy, and, having discovered a herd, they can pursue it for a long time, until they can beat off the weakest animal. For kids, hyenas are a big danger. But moms guard their offspring very keenly.If her child was attacked, the Kulan mom will bravely fight, even if the forces are clearly unequal. It attacks with the help of its strong limbs - front or rear, and teeth are also used. It is very difficult to resist such pressure. It has long been observed that dzhigetai do not put up with dogs and sheep. These are the only animals to which they show aggression.

Kulans eat mostly only herbal food, which is why they are spread on treeless spaces. The diet of animals is no different with delights, any greens are eaten, and when the frost comes, they move to areas of little snow in search of saxaul or other preserved vegetation. The digestive system of the coot is able to recycle even those plants that other animals bypass. This is explained by the fact that it is difficult to get food in areas that are not rich in vegetation - both in winter and in the second half of summer, when the scorching rays of the sun can destroy the succulent grass.

However, Kulans, without knowing it, contribute to the fact that grass cover, and therefore food, is always present in this sparse terrain.With their hooves, they endlessly loosen the soil, providing plant cover. But in this they are helped by other representatives of the animal world: other ungulates, rodents, insects. As practice shows, without them only weeds can grow on the soil.

Due to the small amount of water in the habitat zone, kulans learned to drink any kind of water, even if it is very salty or bitter. Often, in search of moisture, a herd can travel up to 40 km.

Coolers behave very calmly in the herd, without showing any aggression towards each other, and other animals. They even allow birds, most often daws, to pull out their hairs, from which reliable and durable nests are obtained. 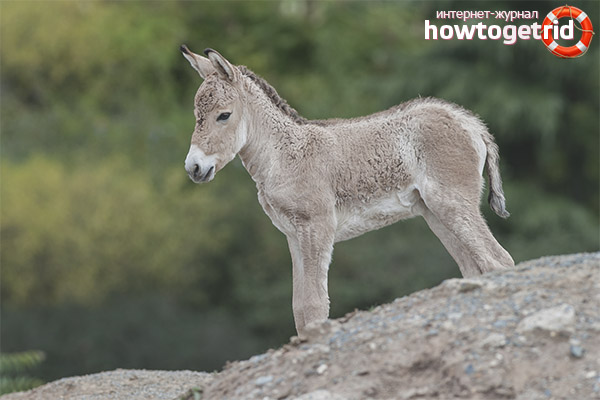 But in the period from May to August, where the meekness and quiet temper go! To conquer a samochka, gentlemen arrange real bloody battles. These minutes, they turn into real uncontrollable monsters with bloodshot eyes and a grinning jaw. Their ears are pressed, they stand up in front of each other, and then try to embrace the opponent with their forelimbs. Teeth are also used. Many males then suffer from wounds for a long time.

In order to attract a female, the leader, who had only recently not been close to the herd, is now very close. His actions are very interesting. To draw attention to himself, he beats the soil with his hooves, tumbles in the most dusty place. These manipulations mean that he wants to please the females. And they reciprocate, and this is manifested in the fact that the female gently bites the withers of the chosen one, which means she accepts courtship and is ready for pairing.

The gestation period is almost a year. Feeling that the cub will soon appear, the female is located in a secluded place not far from the herd so that no one can harm the newborn. It will take 2 - 3 days, and mother with a small, but already firmly standing on legs child will come to the herd. To feed the baby she will be breast milk. Moreover, if the child wanted to eat, and the mother did not guess about it, the kulanenok would not let her move, blocking the way, angrily turning over with her legs and shaking her head ominously. If the mother at this time decided to rest lying down, the baby will find any method to raise her to eat.

This method of feeding lasts for 10 months.During this time, training for plant foods occurs gradually so that the stomach learns how to digest it. The baby has a lot of difficulties. Not only does he have to run away from predators on a par with everyone, but even the young ones aged 1-2 years old are trying to hurt the baby, and while the parents suddenly find themselves far away, they strive to bite him painfully. However, the calmness of the baby is protected by adults.

Full sexual maturity occurs only by 4 years, and then mature males can claim leadership in the herd.