Morodunka is a bird that is included in the family of snipe, squad of charadriiformes. Her brothers in the family are: Curlew, Herbalist, Dandy, Turukhtan, Chernysh, Dunlin. 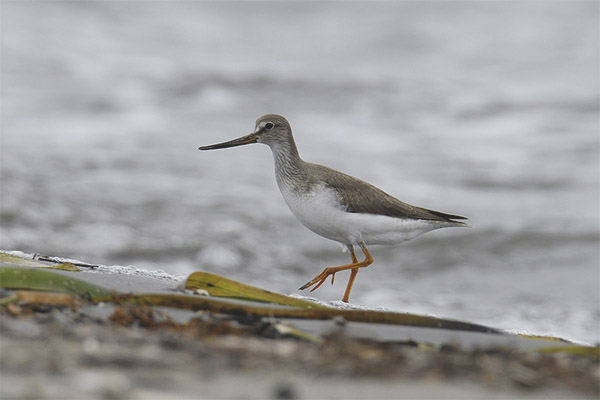 The size of the bird is on average 26 cm., The length of the opened wings is up to 45 centimeters, it looks like a song thrush. It weighs 60-125 grams, a little more than sparrows.

The long beak, curved upwards and the size of two heads, black, is noticeably prominent. This is how it differs from its counterparts in appearance. The color of the bird is dim, similar to the rest of the snipe. The back and wings are brown or dark brown. The belly is often white, sometimes with a brown or brown tinge. The tail is gray. The plumage at the tip of the wings and tail is much darker, brown, even closer to black.

Morodunka has long paws of yellow color, the ends are black, on the surface of the tarsus there are plates.There are membranes, more pronounced between the middle and outer fingers. The neck is average, the tail is pulled out and looks very beautiful during the flight of the bird. Light eyebrows.

There are no differences in coloring between male and female. In summer, the birds have two black streaks on their backs, which disappear after they shed. In winter, the colors are monotonous, almost the same as in summer. The plumage has no bright colors. Only the hatched chick has a downy “outfit”, similar to the carrier, but yellowish or more brown. Juveniles on top have a darker color - brown, the ends of ocher-colored feathers or red. The bird is very fast, it can dramatically change the trajectory of movement.

They feed mainly on animal food. They can eat stones, but birds need them only to improve the grinding and digestion of food in the stomach. They eat insects, for example, ground and water beetles (water beetles). Also love to eat the larvae. From aquatic inhabitants they feed on crabs, mollusks, crayfish, spiders and worms, they can also search for them in the ground. When birds eat, they gather in large quantities. Become paws in the water, where it is shallow, and catch the victim.The beak is lowered into the pond at an angle and lead there from side to side. In addition to food of animal origin, they use algae and seeds. When the morodunk catches a large enough victim, she rinses it in the water and then eats it. On land, looking for food, piercing the sand to the length of its beak.

Morodunki arrive in spring (April-May) to their nests for the mating season. Who does not have a pair - at this time it forms. Birds are monogamous, but couples rarely add up for life. Often after a few years the birds change their partner.

It was in the spring that the Moroduns roared loudly, but this does not mean that they are always a lot of noise. Just during the mating season, all kinds of birds are excited and behave loudly. The male, inviting the female, stands on the shore of the reservoir, raises its tail, trembles its body and wings, while the beak is open.

Winged are very peaceful, easily get along with other species of birds. They nest on the ground, dig small holes about three centimeters deep and less than ten wide. They are lined with leaves, moss, reeds, branches, tree bark, grass and other forest debris. Look for places where nests will be invisible. Usually they are hidden in terrestrial vegetation.You can stand a few inches from the nest and not notice it and the bird that is there.

In May-June, egg laying is complete. In pairs there is from two to five eggs, one brood. Only when the masonry is lost, the female can lay eggs again. They are pear-shaped in shape, color from ocher to brown, or gray with brown spots. They hatch them one by one, the male sits even more than the female. It lasts about three weeks, then chicks appear. At first, the offspring is very helpless. Growth is fast, so parents have to bring them a lot of food. The female leads the chicks to the water, where they will be invisible to predators and safe. There they learn to swim, they are able to dive or swim over a distance at danger. Fly start from about three weeks. This happens within two months, after which the chicks become independent. 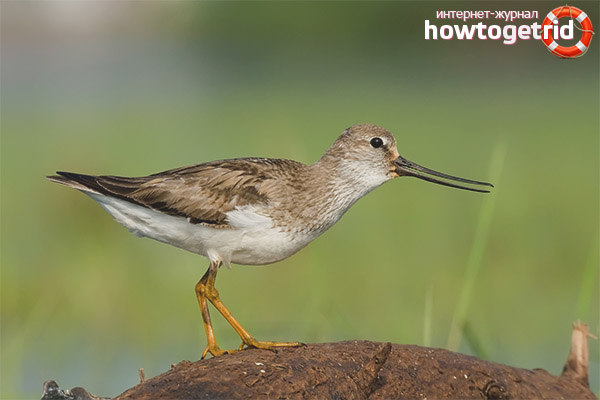 Habitat - Eastern Europe, forest-tundra and forest zone. There is also a Morodun in Siberia. It inhabits where there is a large amount of vegetation. Most birds can be found on the north side of the forest.He likes to settle along rivers, lakes and swampy shores of various reservoirs, where there are drift deposits, flood meadows. Often found in small puddles, which are formed on the banks of reservoirs. Choose the area around the lakes, so that there are places without grass, marshy, with silt or peat.

Rarely sit down on trees, if they sit, then on willow bushes. They can live far from rivers and seas, but this is not very common. It is a migratory bird.

For the winter, in July - the end of September flies to Asia, Africa, Australia. He lives there on the silty sea shores.

Nests are destroyed when a large number of livestock on pastures, rivers out of the banks. Other birds can destroy nesting sites. In the marriage period, they behave restlessly and noisily, which can also be dangerous. The bird is not scared, will fly off to a safe distance and will sit on a snag, to observe.

There are some interesting facts about the life of morodunks: