Most fans of quiet hunting know that the fungus, which is called Amanita, is not suitable for human consumption. In addition, for most people, the name Amanita is immediately associated with a poisonous fungus, the distinguishing feature of which is the presence of a red cap with the presence of white dots on its surface. 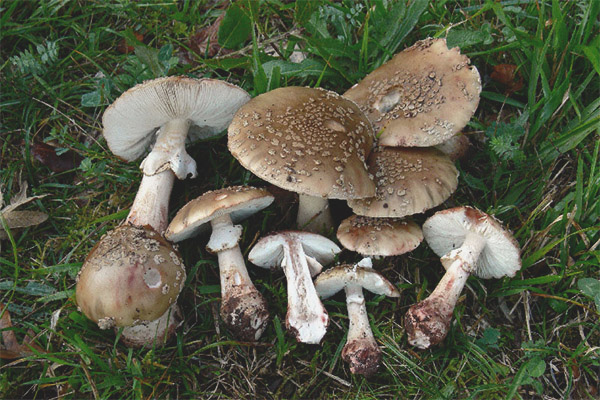 However, it should be noted that, oddly enough it sounds, not all amanitas are poisonous, some of them can be classified as completely edible, do not pose a danger to humans fungi. The most prominent representative of such a family of mushrooms is the so-called gray-pink amanita. This mushroom belongs to the family Amanitovs. In the people he is also known as a pearl, pink or blushing fly agaric.

In what places and at what time grows

This fungus is able to form the so-called mycorrhiza together with different tree species. Mycorrhiza is a kind of symbiosis of the mycelium of fungi and tree roots. In simple terms, this type of mushroom can sprout due to its introduction into the roots of trees.

In addition, this type of mushroom is able to successfully germinate in virtually any soil or soil (black soil, sandy loam, and so on). In the overwhelming majority of cases, the pink mushroom is most often found in the northern hemisphere, in which there is a temperate climate. In most cases, this fungus germinates in small groups in the soil. However, quite often single specimens of this species are found across the mushroom pickers. The period of growth of this mushroom begins from early spring and ends in autumn, until the onset of the first frost.

white amanita - description of where the mushroom toxicity grows

The average size of the diameter of the cap of the mushroom - pink can vary between 6-10 cm. In most cases there are specimens with fruit bodies, the diameter of which does not exceed the mark of 12 cm.In young fungi, the shape of the fruit body is ovoid. The fruit body of mature mushrooms is characterized by its convex shape. It is worth noting that in very old mushroom mushrooms of a pink mushroom, the fruit body acquires a flat prostrate shape, in the center of which there is no hillock.

A characteristic feature of young pink mushroom mushrooms is that they have a dirty brown color, in which a red tint is also present. The surface of the glossy mushroom cap is dotted with warty flakes that are white or dirty - white.

The spores due to which the process of reproduction occurs and the spread of this mushroom, have an elliptical shape. Spore powder is characterized by a white color. It should be noted that the pink fly agaric has a fleshy pulp that does not have a specific aroma or strong odor.

The pulp of this fungus is white in color and differs from other types of mushrooms by its poor taste. In the case of physical damage, it immediately begins to acquire a light pink shade, and after a while the damaged portion of the flesh and does become a pink wine.

The leg of the fungus has a pearl shade and a cylindrical shape, and its height varies from 3-10 cm. In rare cases, you can find specimens whose height reaches 20 cm. The average diameter of the pink mushroom foot is 1.5-3 cm. Initially, it It has a solid structure, but then, as it grows, it begins to become hollow. She is also known for its light pink or even in some cases white color, as well as a specific lumpy surface.

At the base of the stem there is a special thickening, which in its shape resembles a tuber. As a rule, this thickening is attacked by insects, which use it as a place to lay their larvae. This thickening has a membranous structure and hangs in young mushrooms under the fruit body. It has a white tint, however, as the fungus develops, this thickening becomes pink. On its upper part are pronounced grooves.

Plates of the fruit body have a wide shape, are located freely and densely, almost next to each other. As a rule, these plates are white, but if they are damaged, they immediately acquire a red tint, as well as the leg of the fungus.The closest related species of red mushroom are:

It should be noted that during the collection of edible mushrooms should pay attention to the change in their color and structure. After all, as you know, mushrooms that can be eaten during their physical impact, when they are damaged, begin to turn red. In addition, there is a ring on the legs of edible mushrooms, as well as loose plates.

Royal Amanita - description of where the mushroom toxicity grows

Is it possible to eat 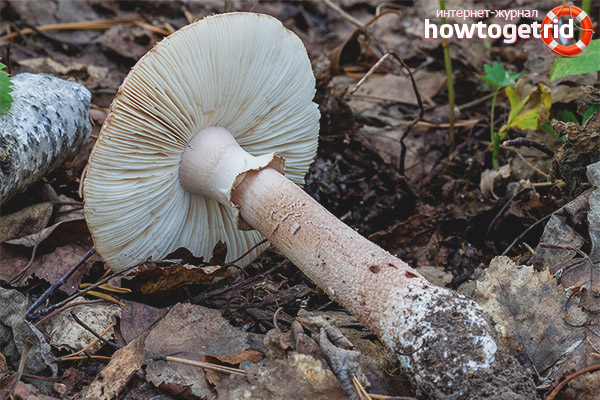 During a quiet hunt, most people try to avoid muffles, considering them dangerous and poisonous mushrooms.However, it should be noted that the red amanita, or as it is also called - the gray-pink amanita, is quite edible and absolutely safe for human health and life. The only thing to consider when eating this mushroom is that it must be properly prepared and in no case be eaten raw.

During cooking, it should be well roasted and thermally processed. It should also be noted that this mushroom is not recommended to be dried and used later in dry form for cooking. However, it is well suited as a staple for pickles or canning.

What are the useful properties

In the red mushroom contains a large amount of betanin. It is worth noting that special drugs are made from this substance, which are used during the treatment and elimination of liver diseases. In addition, this type of fungus is able to destroy harmful and hazardous bacteria in the body.

The useful properties of the red mushroom are the following:

In addition, a gray-pink amanita can be used during the treatment of Alzheimer's disease. Also, its use significantly reduces the risk of developing and developing breast cancer.

Are there any contraindications

Gray-pink toadstools are not compatible with alcoholic beverages. Therefore, in the case of their use is recommended to completely abandon the use of alcohol. In addition, they should not be consumed by those people who are prone to the appearance of allergic reactions or suffer from allergies to one of the components of this fungus. It is also strictly forbidden to eat to children or women who are in a state of pregnancy.

Panther Fly Agaric - description of mushroom toxicity where it grows