Such a waterfowl as the Nile goose belongs to the duck family and, in fact, is the only representative of this genus. This species is widely distributed on the African continent. Directly in the Nile Valley, only a small-sized species was observed. This bird gained fame after its importation into Europe in the 18th century, the main purpose of such a decision was decorative breeding and domestication of the bird. However, over time, most geese are wild, due to which small colonies of the species appeared in places rich in small freshwater bodies. The second common and well-known name of this species of birds is the Egyptian goose. 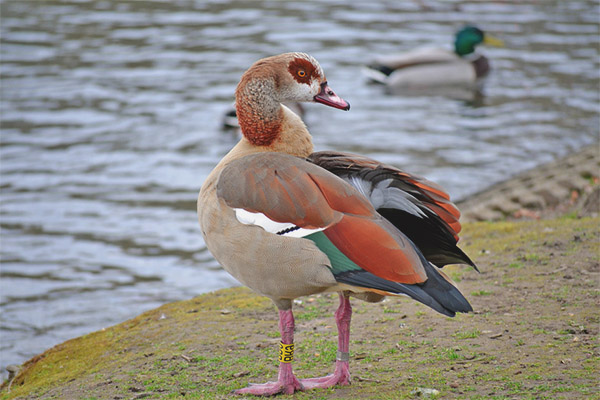 With an average body weight of 1.5-2.3 kg, the Nile goose has a length of up to 73-75 cm.As a rule, the males of the goose are slightly larger than the females, the plumage in birds is identical and not much different. The front part of the head of the individual has a white color, the region of the occiput and chest are yellow (not too pronounced, more pale). The body of the bird is gray in color. The end of the red beak is decorated with a black spot. The main color of the feather cover of the wings is rich brown. Note that the inner part of the wing, which has snow-white plumage, is clearly visible, especially in those moments when the bird is in the air.

Nile goose females and males have significant differences in the sounds they emit. In males, the voice is more muffled and hoarse. For females, on the contrary, it is louder, if geese are indignant with something or see signs of aggression towards themselves - they make a lot of noise.

If the Egyptian geese decided to create a pair - then this is for life. The couple can choose any place for nesting, however, large hollows in the trees are considered to be the most preferable for them to live. Birds use leaves and dry vegetation as material for building the nest.

The Nile goose is directly involved in the construction of the nest; the male searches for and brings all the material necessary for this purpose. The average number of eggs in a clutch is 10-12 pieces. As a rule, masonry starts after the end of the dry season.

The eggs are incubated alternately by the female and the male. Duration of incubation is about one month (28-30 days). Appeared offspring fully fledged after two months.

The sexual maturity of individuals of this species occurs when the birds reach 2 years of age. The average life span of representatives in captivity is about 14 years (the maximum recorded figures). 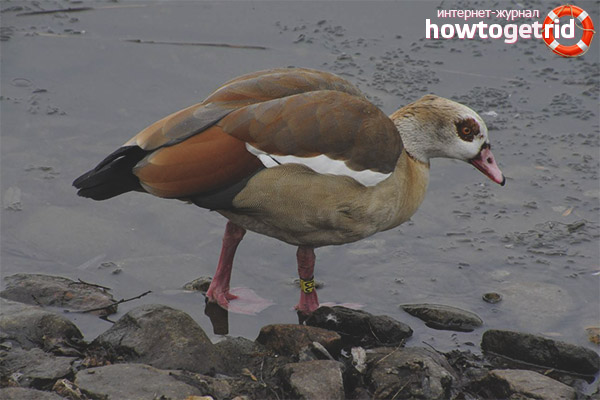 Nile geese get their food on land and in water (different vegetation, leaves, small fruits, invertebrates). During feeding, representatives of this species are kept in pairs. Before you begin to eat, the bird attentively examines its prey and only then starts the meal. The last feeding is usually at the time corresponding to the last hour before sunset. These birds consume water not often - the flight to the watering place is carried out only once a day (closer to noon). To quench your thirst during the day, the goose has enough moisture from the plants you eat.

Nile geese are birds that are extremely jealous of their territory. In the event that they have noticed a stranger in their possessions, they will pursue him to the end both on the ground and in the air, often arranging the most real air battles. Not only their species are taken away from these birds by species, but also by disassembled objects appearing on their territory (for example, drones of medium and small size).

Also, Egyptian geese are often aggressive to other species, which is manifested in the destruction of their nests, especially if the issue of preserving the life of their own offspring is relevant. As a rule, such situations often occur when there is insufficient food for the birds.

In ancient times, the Egyptians considered the Nile geese to be sacred birds, even today their images can be seen on bas-reliefs and ancient frescoes.

Currently in South Africa, birds of this species are considered pests that can not only destroy the crop grown in the fields, but also trample down crops.Therefore, in countries where the Nile geese have received the status of an agricultural pest, these birds are subject to hunting.