Cucumbers during pregnancy - the benefits and harm

One of the popular signs of the coming pregnancy is the craving of a woman to pickled cucumbers. And if salted and pickled cucumbers should not get carried away, then fresh and seasonal must be in the diet. How are they useful for women in the situation, in what form is it better to eat them, and are there any contraindications to their use? 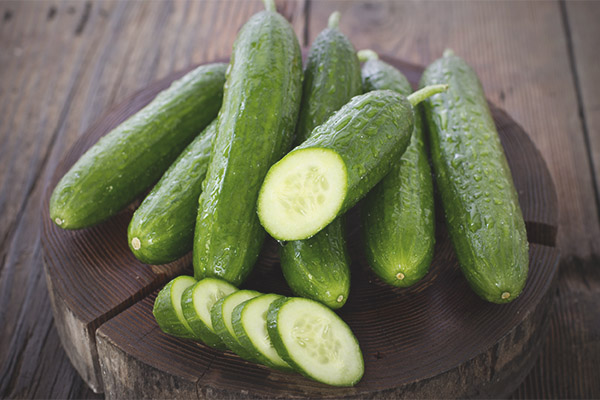 More than 90% of the composition of cucumber accounts for water. But this is not ordinary water that flows from a tap, but natural water, which in its chemical composition is as identical as distilled one. The unique property of such water is that it is a natural sorbent, contributing to the conclusion of toxins from the body. That is why cucumbers help to cope with the first trimester toxemia.

The remaining 10% of the composition includes vitamins, macro-, microelements and fiber.

One of the main advantages of cucumber - low calorie. 100 grams of vegetable contains from 12 to 18 kcal (the exact figure depends on the variety). Therefore, adding it to salads will not only make them tastier, but also allow you to satisfy hunger without the likelihood of weight gain.

What is remarkable cucumbers for pregnant women?

The unique properties of cucumbers

In addition to the effects already mentioned, cucumbers are also considered to be quite effective spasolytics. They improve liver function, can stabilize blood pressure and normalize heart function. Fresh cucumbers perfectly quench thirst and even participate in tissue regeneration.

Cucumber is considered one of the safest vegetables in terms of a potential allergic reaction.It is normally tolerated not only by pregnant women, then by small children. If suddenly cucumbers provoke allergies, then it most often manifests itself in the form of pruritus and redness of the skin. In this case, their use is better to refuse. This effect is most characteristic of greenhouse cucumbers, which are commercially available in winter and early spring. They contain a large amount of chemistry, potentially dangerous not only for pregnant women, but also in principle for the health of any person. But seasonal cucumbers grown in the soil, practically does not contain toxic compounds.

If, being in the position, you are addicted to cucumbers, and you eat them in unlimited quantities, pay attention to possible adverse reactions:

You should also take into account that cucumbers are considered to be a good diuretic. Their large amount in the diet can provoke frequent urination, which can bring some discomfort to the life of a woman. For the same reason, it is better not to use cucumbers before bedtime. Ideally, they should be eaten in the morning and afternoon - so they are better absorbed.

As already noted above, pickled cucumbers are one of the favorite delicacies of most pregnant women. But you can not eat them banks. First, they contain a large amount of acetic acid, which destroys the tooth enamel and can provoke irritation of the gastrointestinal tract. Secondly, salted cucumbers perfectly stimulate the appetite, and this is fraught with a set of extra pounds, which can complicate childbirth. Thirdly, due to the high salt concentration, they cannot be eaten by women suffering from hypertension, kidney disease and chronic vascular problems. 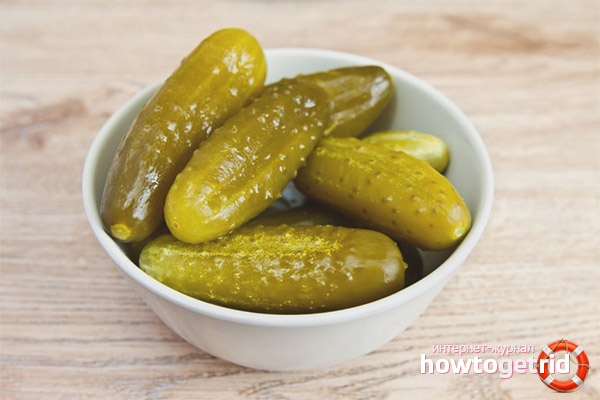 Many pregnant women refuse salted cucumbers, believing that they provoke edema. But the swelling occurs due to poor kidney function, cucumbers in this regard act only as a provoking factor.

Therefore, it is reasonable to limit the number of canned cucumbers per day. As noted by gastroenterologists, pregnant women can eat no more than 2 pieces per day.

The positive effect of cucumbers is possible only if they are fresh and natural. Here are some simple tips to help buy a good product:

Pregnant women can eat crunchy cucumbers, especially if they grow in their own garden, during all 9 months. And besides the excellent composition, they are also distinguished by the unique taste - it is impossible to imagine a full-fledged vegetable salad without cucumbers.

Video: the use of cucumbers for man