White Aspen mushrooms belonging to the Boletov family is a tasty and rather rare edible mushroom. This type of mushroom is very popular among fans of quiet hunting, however, due to its rarity it is listed in the Red Book. 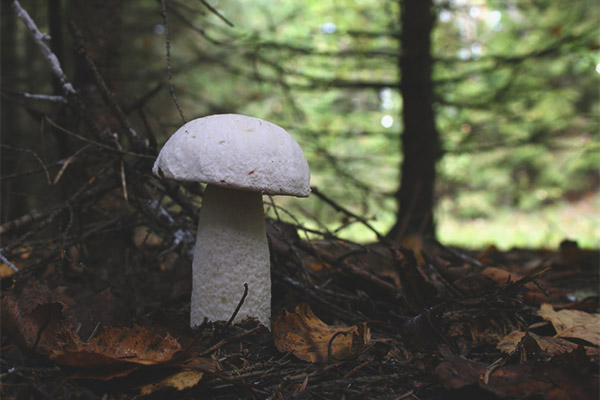 Description of the species

The diameter of the cap of the white aspene varies over a fairly wide range - from 40 to 150 mm. Also quite often there are also rather large specimens of the species, the size of the cap of which reaches 250-260 mm. At the beginning of development, the cap has a spherical shape, with growth it transforms into a pincushion.

The color of the cap is white with a characteristic tinge (may be pinkish, brownish or greenish). As the fungus grows yellow. In addition, the surface of the cap of an aspen is rather dry, without any growths.

The stem is white, club-shaped, at the base has some thickening, rather high.The surface is covered with small bright scales, which with the growth of the fungus acquire a brownish tint.

The color of the tubular body of an asparagus has a characteristic white or slightly yellowish color; in overripe mushrooms it is gray. The fruit body has a white flesh with a fairly dense structure. I would like to draw attention to the fact that when it is broken, the pulp of the fungus changes its color almost instantly - it becomes dark. The spores are brownish-ocher.

Many fans of quiet hunting are well aware that you can only find this delicious type of mushrooms in pine forests, as well as in mixed forests. Often, representatives of this species can be found in aspen trees characterized by high humidity, this is especially true in dry seasons.

The peak of the gathering begins with the arrival of summer and continues until the beginning of autumn. Although this type of mushroom is rare, nevertheless, the orange-cap boletus is rich in fruiting - it grows in fairly large colonies.

In our country, this type of mushroom is most often found in the central part, Siberia.Also, this species grows on the territory of many European countries (western regions), in the Baltic countries, Belarus. There is evidence that white-boletus grows in North America.

Presented to the fungus refers to edible species with high nutritional value. In addition to boiling, boletus can be marinated, fried, dried, and also consumed raw. Aspen is a mushroom that is compatible in cooking with other species of aspen.

Similar views and what to look for

The closest related species is the red cap boletus. The sizes of the cap of representatives of this species reach 150 mm. At the very beginning of development it may seem that the cap is stretched on the body of the leg, but over time it straightens. Pulp of a fruit body rather dense, white color. When broken, it immediately darkens. The layer of the tubular body in young fungi has a white color, with maturation it becomes gray, it becomes thicker with characteristic irregularities. Spore powder has a dirty yellow color.

The leg of the closest such related species as the red-cap boletus is, as a rule, 150 mm long, and up to 50 mm wide.The cylindrical shape at the base thickens. The main color of the legs is white, with a greenish tinge at the bottom. The surface is densely dotted with small soft scales, which makes it feel velvety to the touch.

The main place of growth of the closest related species of white-boletus is aspen. Peak fruiting mushrooms - from June to mid-autumn. The largest concentrations of these mushrooms are found in places rarely visited by humans. Red boletus as well as white mushrooms are tasty edible mushrooms with high nutritional value and excellent taste characteristics.

Another related species is the yellow-brown orange-cap boletus, which is also known under the name of a small leather. The size of the cap of representatives of this species reaches 250-300 mm (implied diameter), its color can vary from pale yellow to rich red. At the beginning of development, the cap has a spherical shape, with the growth of the mushroom, the latter becomes more convex. The flesh is rather fleshy, when broken, it turns a purple hue, after which it quickly darkens. Note that the pulp practically does not have any characteristic smell and taste.

The color of the tubular body is light (maybe both white and gray), the pores are rather small, the spore powder itself is dirty yellow with a brown tint. The length of the leg reaches 180-200 mm. Fruiting season - from mid-summer to mid-autumn. This species refers to edible, somewhat inferior in its taste to white boletus.

boletus white - description of where the poisonousness of the fungus grows