The Pink Pelican is one of 8 species of birds of the pelican-like family. It has a rather large size, approximately like a swan. In its genus, it ranks second in size after a curly pelican. 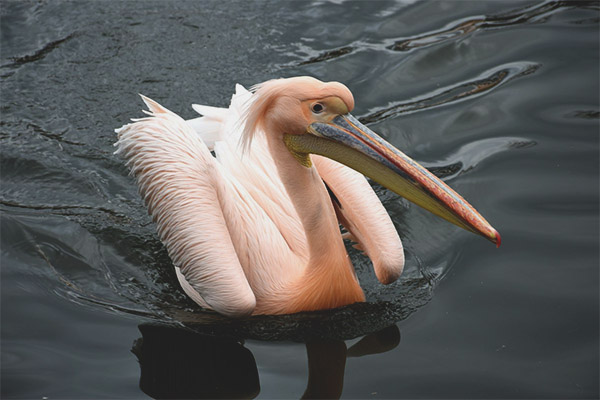 The male of this bird is larger than the female. As a rule, the weight of the male reaches 11 kg, and the female - 10 kg. The length of the female wing is 64-69 cm, male - from 70-75 cm. The wingspan of a pelican is 3-3.6 meters, and the length of the body is 1.75 meters. The beak, like its relatives, is long and straight, with a bag characteristic of a pelican, which is strongly stretched.

The bird's neck is very long, but the opposite legs are short. Around the eyes, bridge of nose, on the forehead and lower jaw is delicate yellow skin without any feathers. On the head is a small forelock of long pointed feathers.

In adults, the plumage is colored white, with a pink hue, which increases to the abdominal part.Thanks to the plumage the bird got its name. On the chest there is an ocher stain. Through the yellowish bag on the beak, you can see the blood vessels of a bright red color. The length of the beak of the female is 30-45 cm, the male is 35-47 cm, with the help of it the individuals breathe, because they have no nostrils.

The upper mandible has a bluish gray color, the white hook on the top with a pink edging is dotted with red spots. The bonnet part with the base of a bluish tint smoothly passes to the top of the yellow color. Paws are webbed, yellow with orange tint on the folds. The iris of the bird is of a pale red color.

The young head with the transition to the neck of a grayish color. Closer to the back, the shade becomes lighter, the dorsal part itself has a pale blue color. Fly feathers are brownish-black, minor with light silver coating, on the main flywheels - white edging.

Medium and large surface wings are colored in brown shades, small bearing wings have a lighter brown tone. The feathers on the tail of a pelican are light gray. On the abdominal part there is a patina of brown color. If a bird sits gathering wings, you might think that its body color is uniform,however, in flight, dark feathers are visible under the wings.

A pelican flies majestically, rarely, but flapping its wings, slowly floating in the air. In flight, it tilts its head, thus supporting a heavy beak. Large wings help to hold a large bird, the heaviest of all flying.

In the mating period, a swelling is formed on the open portion of the forehead. And the other non-feathery parts of the skin are painted in a rich red color with a slight shade of yellow. The iris of the eye is poured to dark red. Neck bag ocher color. Sex differences in pelicans are poorly developed, the main difference between individuals is the size.

The skeleton of a bird weighs 1/10 of the total body mass. Bags with air are located all over his body - under the wings, on the throat and chest in the interosseous space. Because of this, they are so easy to plan in the air and can not dive.

Pink pelicans are listed as endangered in the Red Book. These birds nest in South-West Asia, Africa and South-West Europe. The main part of the nesting sites stretches from Europe to Mongolia. For the winter, the main part flies to Africa, and some to the south of Asia.At the beginning of the last century the main habitats were the Czech Republic, Ukraine, Moldova and Hungary. 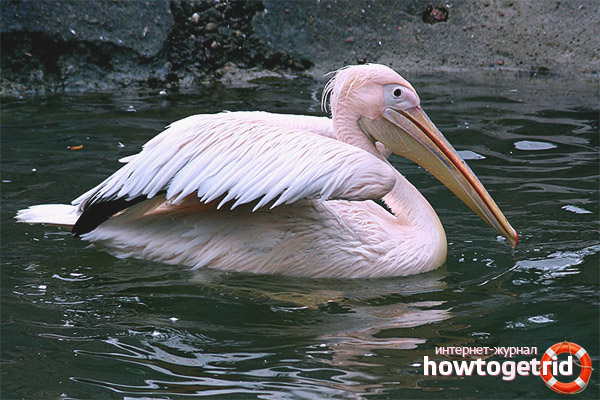 In Russia, the habitat of the pelican is the bed of the Volga River, southeast of the Sea of ​​Azov. On the territory of Asia, the Aral Sea, the Syr Darya delta and the lakes adjacent to it. In Iran - Umriya Lake, Mesopotamia, North-West India and Syria.

Sedentary populations from Lake Nyasa in Africa to Senegal. In addition to Africa, the permanent residence of this species is the south of Vietnam and the western part of India.

Basically, the waterfowl pelican eats medium-sized fish. Comes in shallow water, opens the beak, while stretching the throat sac, scoops up the fish with water. It lowers water and then swallows prey. It is noteworthy that it can hold up to 3 medium sized fish in the neck bag.

It is extremely rare for different species of birds to feed together, the pink pelican is one of these species. Getting the food, the birds form a circle, flap their wings in the water, make noises, driving the fish into a circle, and after that simultaneously scoop. A pelican cannot dive, therefore it only lowers its head and neck into the water.

In Europe, the ration for birds is carp, and cyclites are harvested in Africa.As a rule, most of the food is large and medium-sized fish. Daily need - 1-1.2 kg of fish.

They lead the most active lifestyle in the morning and evening, it is hot in the afternoon and they prefer to sit out. A whole flock of birds swing on the waves, hunt and sleep. There are cases when a bird fights off a colony, which means that it is injured or sick. The colonial way of life is explained by the instincts of protection, it is easier to fight off the attacks of predators. However, there is no hierarchical ladder in the flock, all birds occupy an equal position.

This view does not apply to aggressive, they do not come to grips with each other. The only reason for the fights may be the fight for the nest, in such a battle they are capable of inflicting serious injuries on the enemy with their powerful beak.

Pelicans are monogamous species and create strong pairs. Sexual development occurs in 3 years, at the same time the bird receives the plumage of an adult. Arriving at the nesting pack, they are immediately distributed into pairs, and after that they fight back from their fellow tribesmen for the time of mating.At the time of the mating games, the birds jump, fly, spread their wings and rub their beaks. 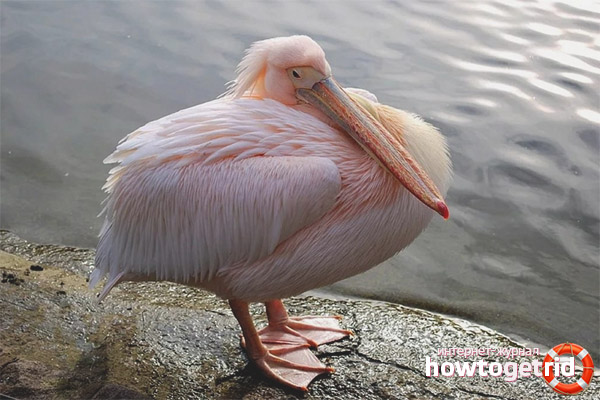 Nests are built on the shoal of lakes and rivers. Couples nest in whole flocks, close to each other, sometimes closely adjacent to the shelters. The female is building the dwelling, while the male provides it with all the necessary materials - grass, branches, clay, and brings them to the place of the future nest. Twist 2 days with a few respite. Once the place is ready, mate.

Sedentary birds are able to hatch eggs at any time of the year, and migratory ones, as a rule, breed in spring.

The female lays 3 eggs in the form of an oval, with a slight touch. Pelicans hatch eggs once a year, however, if within 10 days the embryos die, they can repeat the clutch. It should be noted that, on average, half of the offspring perish due to the fault of predators, climatic conditions and other causes. The incubation period starts from the first egg and lasts 33 days. Occasionally in the morning or in the evening, the male replaces the female in hatching.

Since pelicans nest in colonies of 10-50 individuals, the chicks hatch almost simultaneously. Hatching pelicans are blind, with skin of pale pink color without feathers.In the coming hours, each chick changes color to gray and dark brown. A week later, the skin is covered with fluff.

In the first 5 days of the chick's life, parents regurgitate the half-digested food into their beak, and then feed them with fish. After 1.5 months, the young fly out of the nest.

In the wild, a pelican lives from 15-25 years, in captivity life expectancy can reach up to 30 years.