All herons are remembered by people the ability to stand on one leg in search of food or just relaxing. These beautiful members of the heron family have been recognized for a long time, so today we are considering the red heron. It is distinguished by its shade of plumage, as can be understood from the name. Despite the fact that the bird is red in color with brownish inclusions, if you translate its name from other languages, it literally sounds like a purple heron. 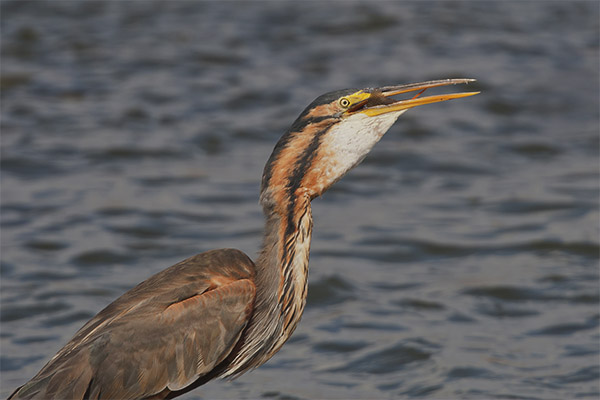 Features of the form

Heron is found on wet flooded plains, near rivers, lakes, reservoirs. When the nesting period begins, the dwelling for future offspring is built on twigs. It is located in the trees. Birds prefer to keep not large flocks, but small groups of small size.

The peculiarity of the birds is that they do not come together in heaps. Individuals prefer to be located at a certain distance.When they nest, they occupy a large territory. Each group is kept in 1-3 km. from the previous one.

If there are too many birds, they together go in search of a suitable place to build nests. There must be plenty of feed in this area. If there is no food, the older generation goes to its prey.

Speaking generally, without affecting the individual members of the family, herons live in swampy areas. Depending on the period of the year, the marsh can be chosen with fresh or brackish water. In winter, they usually prefer salt springs, and in summer they prefer fresh.

These members of the family are rather large in their dimensional features. The height of their indicators reach 93 cm, and the size as a whole - 78-90 cm. Wings in scope vary in the range of 120-150 cm.

The birds in their build slim and elongated. But despite this, they are in the weight category 500-1400 gr. You must admit that these are small indicators for large-sized birds. If we compare the red representatives of the family with their gray counterparts, the second ones are slightly larger.

The side parts, the back, the tail have a plumage of a grayish color with a blue tone.On the chest and in the abdominal part, the feathers are red with a brownish subtone. When the birds are at sunset, they look bright red. But the young are not famous for such plumage, it is more likely brown with red specks.

It makes sense to affect the number of these individuals. They live in the countries of Asia and Europe. They lodge preferably not in the forest, in open places. But in areas with trees can also be in smaller quantities.

You can meet these birds on the Caspian, Black, Aral Sea. Also herons were seen in the Leningrad region. In the vastness of our homeland, these individuals are quite a lot.

The specimens of the presented species obtain their food in small fry. They prefer to eat small fish, frogs, snake-like, as well as insects. Also in the course are mice and rats, mammals of small type. 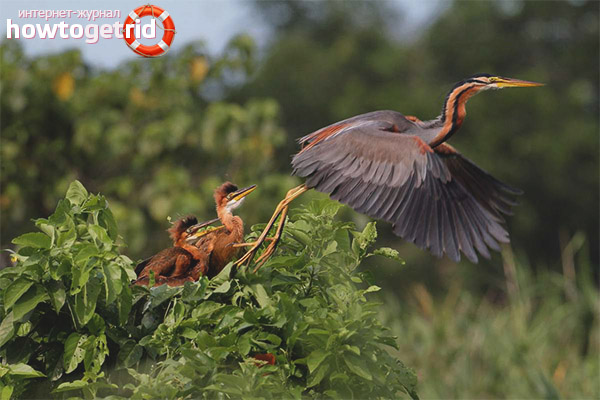 An interesting feature is the process of hunting itself. These birds do not pursue victims, they prefer to wait. They go deep into the water, push one leg and stand still. It may take many hours before the bird feasts.

Hunting time is in the evening or earlier in the morning. Herons do not stand in flocks, waiting for a meal.They diverge at different edges, preferring to get food alone. This is the effectiveness of this method of feeding.

Birds are so fast and strong that they can easily overcome large-sized reptiles. Sharp claws as well as long legs allow these individuals to step over the vegetation, following their goal.

All over the world there are officially over 60 species of represented individuals. The smallest herons can grow to only 50 cm. Large representatives of this species are 1.5 meters tall.

These birds live in different parts of the globe, except for Antarctica and the polar regions. Individuals of the represented family live in brackish and freshwater sources, as well as in marshlands and reed beds.