Fat during pregnancy - the benefits and harm

Sometimes we understand that our Russian delicacies can not be compared with overseas hamburgers and pizzas. It’s good to boil or fry potatoes in a good company, open a jar of pickled cucumbers, finely chop the onion and be sure to decorate the table with tasty and fragrant lard, cut into thin layers. Even the most capricious future mommy will not refuse such a pleasant dinner. But whether it is safe fat, how it affects the body of a pregnant woman and whether it is acceptable fat in an interesting position, try to figure it out. 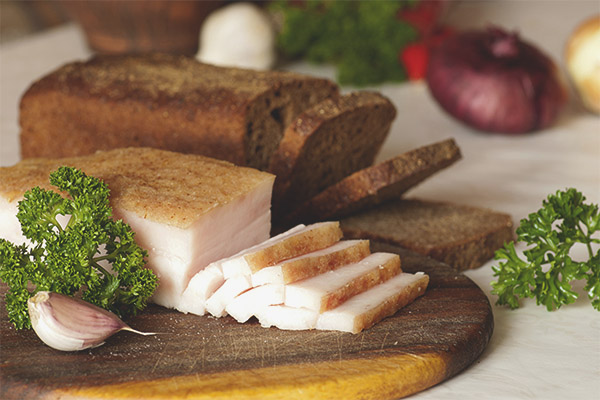 Useful properties of fat during pregnancy

Fat is a solid fat that is deposited during animal nutrition. Salo is eaten raw, salted, smoked, stewed and fried. Animal fat contains vitamins and trace elements, it has valuable fatty acids.All this makes fat really useful, especially for an organism depleted in pregnancy.

Of course, the benefits of fat can not be compared with valuable substances in the composition of vegetables, fruits and berries. Moreover, fat has a lot of negative sides.

sushi and rolls during pregnancy - the benefits and harm

What is harmful fat during pregnancy?

Future mommy is often told that she should eat for two. If you follow this rule, then by the end of the pregnancy a woman will come up with a huge amount of excess fat and a lot of related problems. Nutrition really should change, but not quantitatively, but qualitatively. The diet should be balanced, healthy and varied. But to lean on the calorie content of food is impossible. Fat is one of the most high-calorie foods you can imagine. In the fat contains more than 700 kcal per 100 grams of product, this is a full portion of an adult.That is why you need to limit the consumption of fat - no more than one piece per day. Such a portion will not harm the future mom and will only benefit.

Another minus of fat is its ability to raise the level of cholesterol in the blood. Therefore, it is still not worthwhile to introduce lard into a regular diet; it is enough to savor a delicacy only with a special desire, not more than twice a week. Salted lard is considered even more harmful because it contains a huge amount of salt, and this provokes the formation of edema. In smoked fat there is much more salt, moreover, it may contain hazardous chemicals if the product was smoked not in a natural way, but by treatment with liquid smoke. Even a healthy person can feel pain in the abdomen and heaviness in the liver after smoked fat, what can we say about a pregnant woman.

How to have fat during pregnancy? 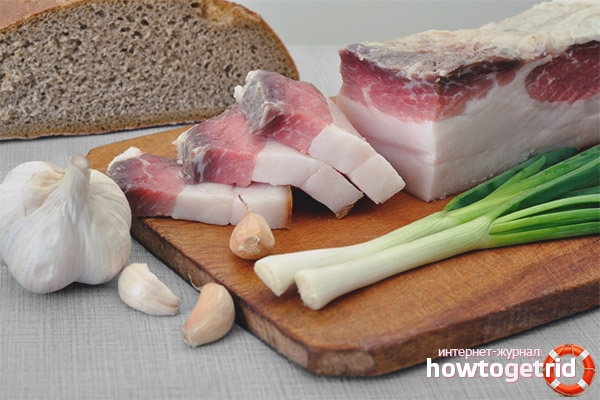 Summarizing and comparing the benefits and possible harm of the product, we can say that during pregnancy there is fat, but only in moderation. From salted and smoked bacon is definitely worth giving up. In addition, some indulge themselves with fried lard - the so-called cracklings.During frying, animal fat produces a huge amount of harmful components, it is a kind of cholesterol bomb. It is strictly contraindicated to eat cracklings during pregnancy. Also, you can not lean on the fat with the addition of various kinds of spices - to the common harm of such fat will cause a woman to belch, heartburn and other problems with the gastrointestinal tract.

When choosing fat for a pregnant woman, you need to carefully monitor that the product does not contain preservatives, flavors and other low-use additives. It is better to buy lard in supermarkets - there is indicated the expiration date and time of product packaging. In spontaneous markets, fat often lies next to raw meat; it is very dangerous to consume such a snack. Salt lard before eating should be washed to reduce the amount of salt in the product. Raw lard without heat treatment must be frozen to get rid of possible germs and bacteria in its composition. The most useful during pregnancy is boiled fat. It does not contain salt and various pathogens, moreover, cooking does not imply critical temperatures at which carcinogens are formed.It is best to cook lard yourself at home, you will be sure of its composition.

It is tastier and healthier to eat a piece of bacon with vegetables, a crust of black bread and onions. Remember that fat is digested for quite a long time, it cannot be combined with dairy and sweet products, otherwise the heaviness in the stomach is provided to you. Eat fat properly, and it will only benefit you!

shrimp during pregnancy - the benefits and harm

Video: the benefits and harm of pork fat