In the mountains of Europe and Asia Minor live small graceful goats named chamois. From the pre-Slavic language the name can be translated as "horned". And if you translate from Latin, you get a "rock goat." In total there are 7 subspecies in accordance with the habitat. But the differences between them are very small. 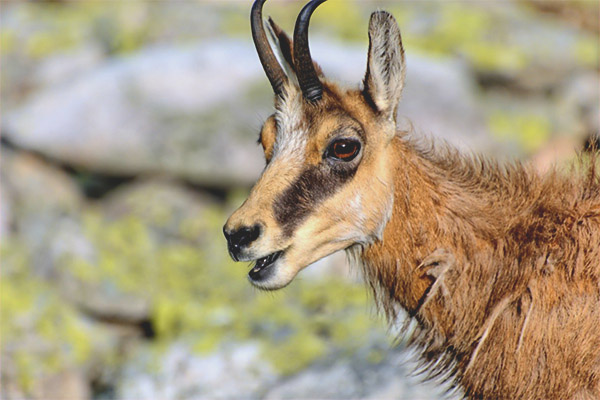 Chamois is from the class of mammals, the formation is compact, seemingly slim, thin neck, short muzzle, the length of the animal is about 1 meter, the height at the withers reaches 75 centimeters. The mass of an animal varies from 30 to 50 kilograms. The tail is very short, within 7-8 centimeters. Legs are also slender with flat hooves, with the front legs shorter than the rear. The length of the protruding ears is only half the length of the head itself. On the head at chamois of both sex adorn 25-inch horns, curved back. Behind them is a small hole from which a slimy smelly secret is secreted during the rut.

The color of chamois varies according to the season: in summer, the outer part has a red-brown color, and the belly is red with yellowness. The back of the paws is white, the lower limbs are black, the end of the tail acquires the same black color. From the ears to the eyes is a black stripe.

In winter, the back becomes dark brown, the belly turns white. Legs with the head become yellow-white.

Favorite places for life are cliffs and mountain steeps, covered with forests. They can live in any forest - birch, fir, mixed, but prefer coniferous. In the summer, they climb into high rocky areas, where they masterfully jump over rocks and crevices. In winter, cold is forced to descend into lowland forest thickets.

Chamois usually live in small groups of 10-25 individuals. But sometimes these communities come together to form large herds.With the formation of such a herd, an experienced female usually takes the lead. There live mostly females, the stronger sex avoids such a large gathering of people, living a single life, or forming groups consisting entirely of males. In the herd, they come only to continue the race during the rut.

As already noted, in the warm season, animals climb high in the mountains, where one of the members of the group vigilantly bears guards, notifying the others about the onset of danger with a whistle. As soon as the snow falls and hide the food, the animals descend down to the meadows. They have their favorite places to which they keep affection, they feed constantly there, and even shepherds and hunters do not frighten them.

The way of life of goats at night, during the day prefer to relax. In the chamois, great curiosity and no less great cowardice are combined. Another distinctive feature of the chamois is the ability to jump quickly and quickly - from time to time a jump can reach 7 meters.

Chamois become sexually mature at the age of 20-22 months, but they begin to multiply only when they reach the age of three years. 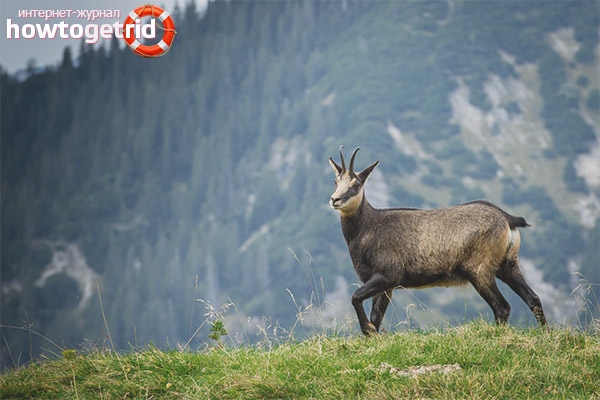 Gon lasts from the end of October, animals mate in November. The female goes to the pregnant woman for about 150 days, in May-June it is time to give birth, and the goats hide in the forest thickets. Usually, one baby is born, less often - twins, from the first hours of life they show independence, almost immediately (in an hour or two) they can move after the mother. For some time the parents, until the children are strong, and live with their offspring in the undergrowth, avoiding appearing in open spaces, but after a while they return to the herd.

The mother nurses the children for three months, the first six months is always near them. In the event of the death of the mother, the care of the little goats is taken by other members of the herd. At four months, children begin to appear horns, and by the end of the second year of life, their formation is completed.

Chamois are herbivores and feed on grass growing in habitats, gnaw young shoots from bushes and trees, eat leaves. In winter, they look for moss under the snow, eat lichens. When there is too much snow, they visit the haystacks left by them in the fields. For the normal functioning of the body in need of constant absorption of salt, because regularly visit the salt marshes.They know how to live for a long time without water, in case of need they lick up the dew that fell on the leaves and grass.

Chamois and the Red Book

All subspecies, except for the Caucasus, are listed in the Red Book, as the population is decreasing, and in Russia there are no more than two thousand chamois left. And even then, most of them live only in specially created man-made reserves.