Field champignon - description of where the toxicity of the fungus grows

Champignon is well known to many gourmets. Mushroom is very popular and widely used in cooking. The word "champignon" has French roots and literally translates as a mushroom. And, despite the fact that a certain French charm and refinement emanates from this name, champignon is not a rare delicacy on our table. Very often this mushroom can be found on the shelves of stores in fresh and frozen form. Edible champignons are very popular in our country, they are artificially grown in special greenhouses. Moreover, not many people know that in nature there is a huge variety of champignons that grow in their natural environment. This kind of mushroom also includes field champignon, about which you can learn more from this article. 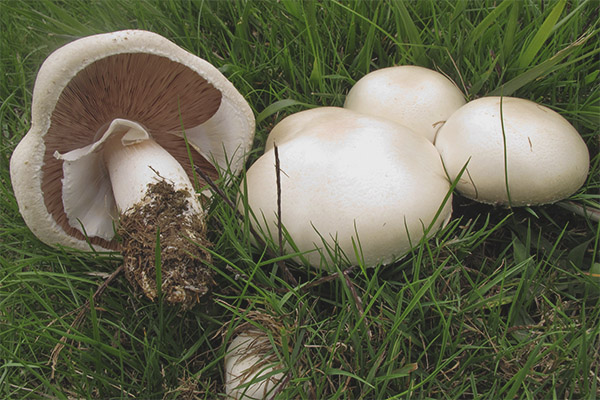 It is a representative of one of the 200 varieties of champignon mushrooms of the Agaric family. It is considered one of the largest mushrooms of its kind. Mushroom refers to edible mushrooms, so experts rank it in the third category by classification.

Field champignon has some distinctive features that distinguishes it from other varieties of this family. Depending on the maturity of the fungus, the champignon cap of the sidewalk may have a different shape. In young animals, the hat has a bell-shaped or rounded shape with edges turned inward, and in mature mushrooms a flat hat with a prominent tubercle is formed. The edge of the mushroom caps has a smooth and wavy structure. The diameter can be from 7 to 15 cm.The skin color of mushrooms has a cream or white texture. The shade of the mushrooms changes to yellowish or ocher if touched to the surface. According to the structure, the champignon's skin is silky and smooth, sometimes the surface is covered with a scaly texture and has a brown or yellow color. The young under the caps can be seen a compacted blanket that covers the plates. And in the mature representatives of the mushroom family, with a marginal part of this veil. In young animals, these plates have a pale and pink hue, but in more mature mushrooms, lilac and even brown color predominates, which may eventually become black.

In young animals, the interior of the mushrooms has a more dense white tone. However, the older the fungus, the flesh becomes softer to the touch, over time, its color becomes yellowish. If you damage the cap of the fungus, then after a while its surface will turn yellow. The flesh has a peculiar flavor, gives a little anise or almonds, the taste is sweet.

The field mushroom stem is fairly smooth in texture. The older the fungus becomes, the more its leg changes.Mature has a cylindrical shape, sometimes expanding at the base. Champignon legs can form up to 10 cm in height and up to 1.5 cm in width. In a mature mushroom, its interior becomes empty. The leg of the fungus has the same color as the cap. A two-layered ring with a scaly texture at the bottom of the surface is formed at the top. The leg is easily separated from the mushroom cap.

reddening umbrella - description of where the mushroom toxicity grows

This variety of champignon mushrooms belongs to saprotrophic organisms, therefore it usually grows on humus soil supplemented with organic matter. Field champignon usually likes to grow in grassy areas where there are no neighbors - trees. From this and went sonorous nickname - field mushroom. After all, the most favorite place of field champignons is the forest edges without trees, glades, park areas, roadsides along the edge of the forest road, pastures. Fans of mushrooms can find these mushrooms not only on flat terrestrial surfaces, but often on the hills, where a stinging plant - nettle grows wildly. It is almost impossible to find champignon under a tree, sometimes its habitat may be the soil under fir trees.Usually these mushrooms lodge in a group: they grow next to each other, forming a semicircle. But sometimes they can be found alone. 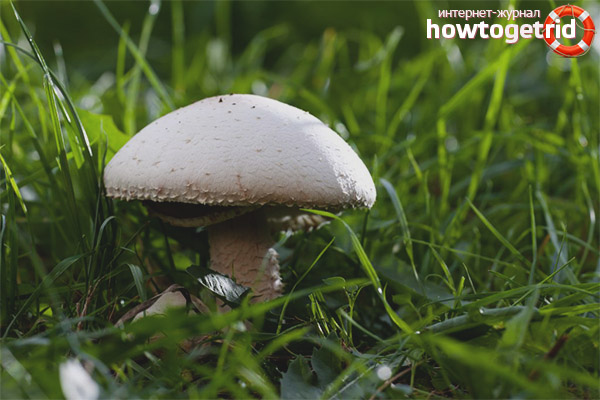 This variety of mushrooms has spread throughout Russia and even in the Caucasus. Very often they can be found on the European continent. These mushrooms grow in the northern temperate climate. Experienced mushroom pickers know that you can look for field champignons with the arrival of spring. Mushrooms begin to emerge from the soil in early May and to the end of November. Of course, everything depends on the climatic conditions of their growth.

Champignon is truly considered a real decoration of any holiday table. It can be called a delicacy of its kind, because it goes well with various types of dishes. However, it is important for inexperienced mushroom pickers to remember that champignon can be easily confused with some poisonous relatives.

The field champignon has edible counterpart, with which it is easy to confuse it by inexperience. For example, curve mushroom can be found deep in the forest, where there is almost no sunlight. Meadow champignon usually grows on lawns,and his brother, the mushroom champignon, prefers to settle far from open areas. Field champignon has some characteristic differences from its twins. He chooses other places for growth, and he also has larger sizes in comparison with his fellow mushrooms.

At the same time, inexperienced mushroom pickers can also easily encounter in the forest poisonous representatives of this mushroom family, which like two drops of water can resemble field champignon. The edible species has some of the same features as the pale toadstool, which mushroom pickers often call the white fly agaric. Pale grebe is very poisonous, so you need to be very careful in collecting mushrooms in the forest. It is important to remember that the edible appearance has pink plates, while the pale toadstool has a white color. There are also two brown, smooth rings on the toadstool's leg in ripened state.

Mushroom Forest - description of where the poisonousness of the fungus grows

Video: how to distinguish mushroom mushroom from pale toadstool