Singapore cats - breed description and character of a cat

Kucinta is what many felines call it. If you translate into our language, you get nothing more than “Cats of love”. And someone claims they are children of slums and ditches. Ambiguous, isn't it? 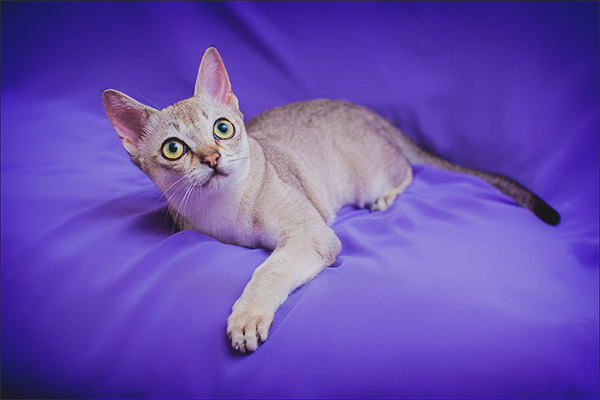 The origin of this amazing breed is still a mystery. No one can say for sure, or rather, prove who first discovered them to the New World. Let's try to understand what the Singapore cats are, what their story is, what they look like and what their temper is.

On the history of origin

The first representatives of this breed, which can be considered the ancestors of the now famous cats, in a very large number were residents of the island of Singapore. Due to excessive abundance, the sewers and sewers were completely clogged. Locals did not attach particular importance to the beauty of these animals.

During the reconstruction of the sewage system, most of the representatives of the breed, unfortunately, died. Perhaps everything would have ended more sadly, and the world would never have seen these incredible cats. But, as often happens, the confluence of circumstances influenced their further fate.

By coincidence, or rather the savior, was an American scientist Meadow, who arrived on business in Singapore. Although in small numbers, Singapore cats continued to roam the streets of the island. Drawing attention to them, or rather to a miniature size and beauty, he decided to send them to his good friend in America. Familiar, in turn, was a breeder. Four extremely beautiful Asian cats, naturally, could not leave her indifferent. Upon returning to America, Meadow and his girlfriend began breeding. But the story itself is silent about the process and the results. No results of selection were presented to the world.

It took about 10 years, and breeders, not related to Meadow, turned their close attention towards this breed. Enthusiastic, they decided to try to include them among the nursery representatives of America.However, it was not there. Struggling for justice and recognition of his primacy, Meadow said that it was he who was the first to discover this breed, having sent once to America. But justice was not destined to triumph, because, being 10 back in Singapore, he represented state affairs. These affairs were classified as “secret”, therefore, he could not prove his stay and the transportation of cats.

How not cool, no matter who discovered this species, Singapore cats have become everyone's favorite, taking their place in the animal world.

A small digression, which will not be included in the description of the breed, is an extraordinary brilliance. Glitter is not only a voice that can not be ignored, but also of all nature. Each element of the wool, each part of the body - everything has a natural luster, which will sweep up, perhaps only true connoisseurs. 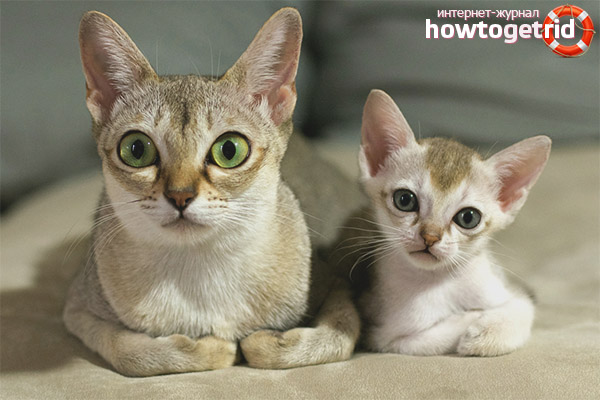 Regarding the characteristics of Singapore cats:

Based on this, it should be noted that the distinctive feature of the breed are unusually bright big eyes, and the very small size of the whole body.

Despite the main color, the dark stripe goes from the tip of the tail, along its entire base, leaving for the remaining body. It is not considered something surprising if the dark stripes will pass along the front and hind legs. At this point, how nature will dispose.

If we talk about the standards of color recognized by international organizations, then only ivory and sable are considered correct. Any white spots, stripes and rings in color will be considered defective flaws, which does not allow the pet to participate in any exhibitions and competitions.

Canadian Sphynx - description of the breed and character of the cat

If you compare these cats with a person, they can be attributed to the type of people who are very shy, secretive, and heavy to the perception of noise and curses. This is actually the case. If you, having got a kitty, at the time of construction, rely on instant love and affection - you can forget about it.Address her when the order in the house is settled, the noise subsides, loud-voiced people leave the room, and you will be ready to accept the new tenant with calmness and tenderness. 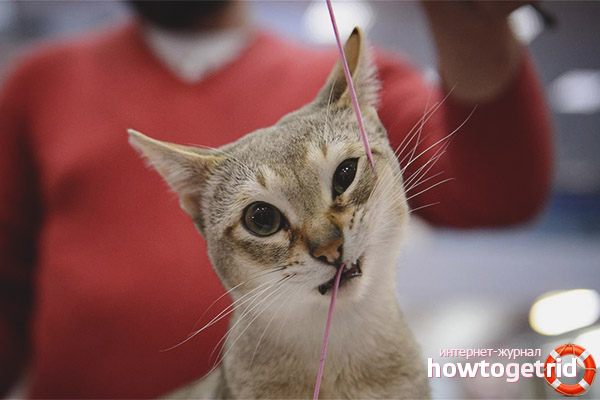 As for strangers - these cats are very careful and cautious. In order to allow a new person to come to them, they need time. Very similar to the behavior of many people, is not it?

Well, caution hasn't hurt anyone. Unlike the defense mechanism, which works as aggression and attack. Such a reaction is unpleasant, even if it comes from a miniature pet.

Being friendly and gentle animals, they still remain cats. What are cats famous for? Of course, his love of freedom. No cat recognizes any creature, no matter how beloved it is its master. She can show her love and affectionate attitude, but she will never accept that someone has power over her life. You can be sure of her loyalty and warmth, but do not expect that she unquestioningly dedicates her entire existence to you.

If there is a baby in your house - be sure that the Singapore cat will love him and protect him as his own child. Maternal instinct laid in them by nature.

Turkish van - description of the breed and character of the cat 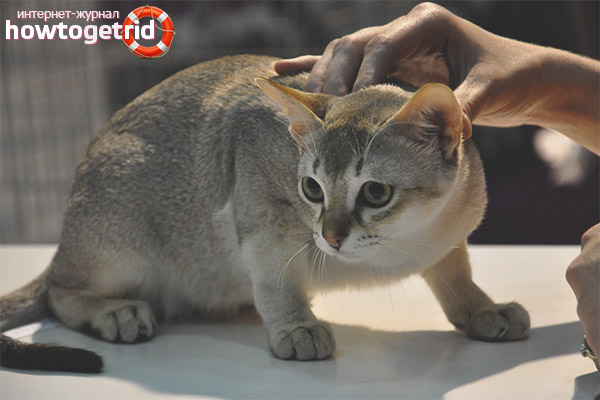 The development of small pets always proceeds much slower than standard breeds. If ordinary cats are given to new owners, on average, after the expiration of 4 weeks of age, then Singaporean ones only after 12-16 weeks.

Persistent tolerance of viral infections can sometimes be accompanied by intolerance to any types of vaccinations. It is also worth canceling that the risk of disease may be in the presence of a draft. Cold symptoms are very common. If you notice that your cat has eye or nasal discharge, general lethargy or fever, you should contact your veterinarian. As a rule, colds infections do not have serious consequences, but it is better to err. What seems insignificant to man can be a great test for a small creature.

Singapurov should try to keep it as far as possible from frost due to their natural intolerance to cold and drafts.

American Curl - description of the breed and character of the cat

Wool, despite its length and smoothness, must be combed at least once in 2 weeks. As for rubbing eyes and ears, this also needs to be done periodically.

There will be no problems with training to the tray, but you should pay attention to ... the toilet. Singapore cats are famous for their intelligence and wit among their fellows. Many noted that due to their own observations, cats eventually understand why this structure was created, which we refer to as a toilet. To date, there are special seats for animals that are used by many owners in order to “humanize” their favorite pets. Think about it!

Obesity is not a feature of this breed. But this does not mean that you can begin to feed the animal with everything that comes handy. Proper nutrition - a sure way to achieve smooth functioning of the body, and, of course, longevity.

It is recommended to refer to feeds that are designed and specialized for each type of pet. Among the large selection you will be able to find what your cat or cat will like. The meat content in them should not exceed 30%.

Of course, there are also such representatives of the feline, who do not take specialized feed. As a rule, such animals prefer food inherent in the human diet, and often ask for salted fish, milk, ice cream, chocolate, fried meat or sausage. It is not necessary to be led by the whims of his, albeit beloved, but pet. Ideal for their health fit grain food, meat containing the minimum amount of fat, and vegetables, red.

Ukrainian Levkoy - description of the breed and character of the cat