Sushi and rolls during pregnancy - the benefits and harm

Japanese sushi dish has long been included in the diet of the Slavs. There are many varieties of it that have won the love of millions of gourmets. Both men and women love to eat sushi. However, the latter sometimes wonder if sushi can be consumed while waiting for a child to be born. 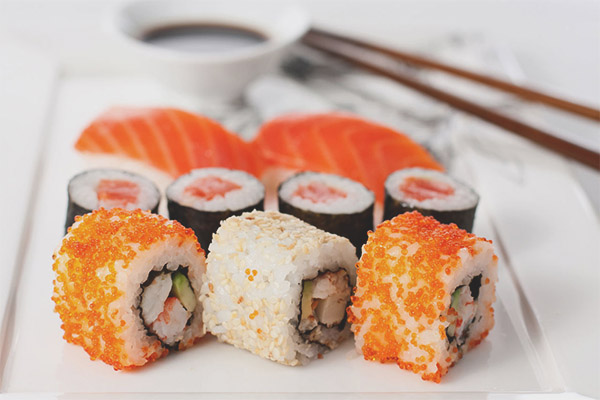 The benefits of sushi and rolls

Experts believe that excessive love for an exotic dish is in fact just a tribute to the fashionable trend. Initially, the rolls appeared in institutions of America, and only then moved to Europe and the CIS. In Japan, the dish calls "sushi", the name was adapted to the Russian language. Some do not like sushi, but there are many fans and followers of Japanese cuisine in the world. A pregnant woman should understand that traditional Russian dishes are more suitable for our body than overseas innovations.Our products correspond to the genetic memory of the human body.

The composition of land includes ocean fish, and sometimes algae. As you know, these seafoods contain many iodine compounds. They are very useful for the functioning of the thyroid, heart, liver. The fish that is used in the preparation of the dish contains other useful and necessary for the human body elements:

The above microelements have a beneficial effect in the human body - contribute to its healthy functioning, strengthening the immune system, bone and nervous systems. In preparing dishes at our latitudes, such varieties of fish as tuna, eel, salmon are used. Since the fashion for Japanese cuisine is not going to disappear, then lovers of dishes becomes every year more. Sushi includes seasonings such as wasabi and ginger, which are pre-pickled. Japanese rolls can be found today in almost every Russian restaurant.

The dish also includes rice - the most famous dietary product.The minerals contained in it help excrete excess fluid from the body and stabilize metabolic processes and cellular metabolism. The composition of rice includes the same trace elements that are contained in sea fish.

The more grain is processed, the less elements that are useful for humans are stored in it. Rice is used in many diets for weight loss, being a valuable dietary product that contains few calories. The main benefit of rice is that it:

Sushi based on ocean fish quickly prepared. However, the future mother needs to know that sushi cooking in our latitudes is radically different from the Japanese recipe. Japanese people use only fresh fish for the dish, which is not available on our territory. The Japanese thoroughly know the technology of their cuisine and sushi recipe, because it is their national cuisine. Not every restaurateur will bother to match the essence of the Japanese dish.Many restaurant owners do not hire professional sushi specialists, who are trained in all the nuances of cooking Japanese food.

A product familiar to the stomach of the Japanese can do a disservice to the body of a Slav. Doctors recommend to use less dangerous options for sushi - fish that has undergone thermal processing.

If you are going to try sushi during the period of carrying a child, a woman needs to think about whether it will harm her health. Our body is not able to fully absorb raw fish. As a result, the use of raw frozen fish, the mother can disrupt the well-established work of the stomach and gastrointestinal tract. Very often, the fish delivered to catering establishments does not undergo proper processing and is not stored properly. Fish before cooking is served as fresh. Poisoning with spoiled seafood is a major risk when eating Japanese food. 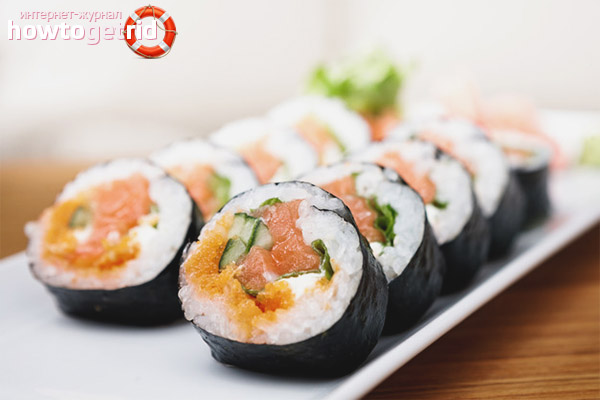 There is also a high probability of catching helminthiasis from eating a raw product. Parasites provoke a malfunction of the stomach and intestines, causing severe damage in the human body by toxins.With helminthiasis, the body does not absorb the necessary nutrients and vitamins.

Any doctor recommends a pregnant woman to eat those products to which the body is genetically accustomed. This means that overseas ocean fish are often not suitable for our stomachs. To digest the delicacy, the body has to spend a lot more energy. Our ancestors did not eat raw fish pieces. Therefore, doctors are strongly advised not to use sushi during pregnancy.

Sushi is useful for their proper preparation, in compliance with all the rules of technology. Unfortunately, in our restaurants the situation is worse. The lack of proper storage of fish and heat treatment can adversely affect the health of the expectant mother. By consuming raw seafood, a woman puts herself at risk for listeriosis and toxoplasmosis. In Russian restaurants almost no freshly caught ocean fish is served. Only frozen product is brought into the territory. This should be remembered when there was a desire to certainly try sushi in a bar.

How to cook safe sushi

Many expectant mothers are desperate to try sushi.The fish should be pre-frozen for one day. Freezing contributes to the death of the larvae of worms. Then the fish must be subjected to heat treatment. It is impossible for the future mom to buy ready-made sushi in the supermarket. It is better to cook a fish dish at home.

If the recipe states that it is necessary to add ginger and wasabi, then their use is contraindicated in carrying a fetus. Japanese horseradish causes heartburn and soreness in the stomach, and ginger can cause an allergic reaction. Spices during pregnancy cause nausea, heartburn, flatulence. It is also impossible for Mommy to consume soy sauce, which can act negatively in the female body.

Traditional Japanese dishes are loved by many women. However, during pregnancy it is important to take into account the existing risks of ill health. A woman can only eat cooked fish. It is enough to boil it quite a bit or soak for 5 minutes in the oven, in the pan.

Cooked at home, like sushi, boiled fish with rice is an excellent safe alternative to Japanese delicacy during pregnancy.Mom may like this new healthy dish, because you can eat it without worrying about your own health and the health of the future baby. If you are a fan of sushi, then listen to the recommendations of doctors - you should not risk eating fresh fish during pregnancy.

Video: is it possible to eat sushi and rolls during pregnancy