During rains the river overflows, then returns to the mainstream, but large huge reservoirs remain. You can often find a sandpiper near them, thoughtfully standing on one paw and hiding a large red beak under the wing. It rests herbalist. What is this bird? 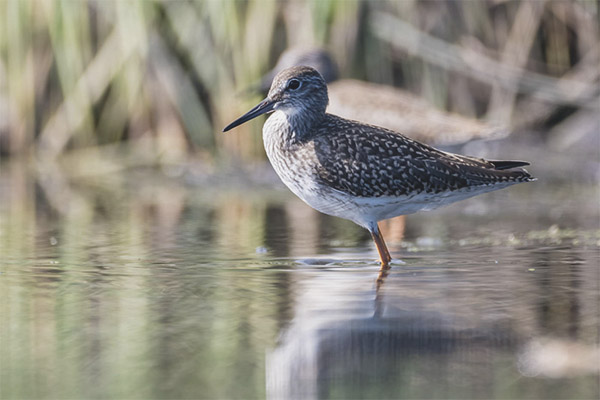 At first glance, it is immediately obvious that the bird has a considerable relationship with the snipe. An adult herbalist is about the size of a small thrush; it reaches about 30 centimeters in length and weighs 170-180 grams. Wingspan - 65-67 centimeters.

The feature by which it is easy to recognize this feathered one is red, sometimes orange in the color of the beak and legs. And the beak is not the whole of this color - the tip is black. The body is covered with black-brown, darker on the back, turning into plumage with a black and greyish mottled on a light belly. On the edge of the wings is a strip of white, on which flying herbalist is easy to recognize - this is a kind of indicator and hallmark.

Herbalist likes to live near swamps or in wetlands, along the shores of seas, large and small, and other water bodies, it is desirable that there be as much vegetation as possible. He lives in the north of the African continent, in the South Asian regions, occupies the entire continent of Eurasia. It lives in Iceland, on the islands of Great Britain, in Primorye, Tibet. A lot - more than 1000 pairs - nest in Italy and on the Mediterranean Sea, where they live year-round, not flying to winter apartments.

In Russia, it is found in large numbers in the south and west of Siberia, sometimes reaching the northern taiga regions. Many herbalists live in Transbaikalia. The bird belongs to the migratory, goes to winter to warm regions - to the south of Africa, the Arabian Peninsula, to the warm Asian countries, to Indonesia, India, Pakistan, even reaches far away Australia.

Home from wintering grounds, herbalists arrive at the end of March - early April, sometimes in flocks, sometimes in small groups or one by one. The first to arrive on their native land are males and start waiting for the females. After waiting, they begin to flow, flying around the female and whistling melodiously and beautifully.This beautiful singing is another herbalist feature that makes it easy to recognize.

Having formed a pair, the birds mate, begin to build a nest. Grassland is chosen for nesting, a small hole is made in the ground and is covered with tufts of last year's grass, lying around with dried up leaves or moss. Some individuals do not litter - the eggs are carried directly to the ground. In the clutch there are from 1 to 5 pear-shaped ocher, sometimes greenish eggs. Both parents incubate, carefully guarding the masonry and driving away uninvited guests. It comes to the fact that sometimes it is necessary to engage in fights with those who want to steal the future brood - crows, magpies.

The female flies out of the nest shortly before the birth of offspring, the male continues to hatching alone. After 25-27 days, the chicks appear, who are raised by one father for about a month, and after 25-27 days, the young birds start flying. Chicks become sexually mature only in the second year of life. 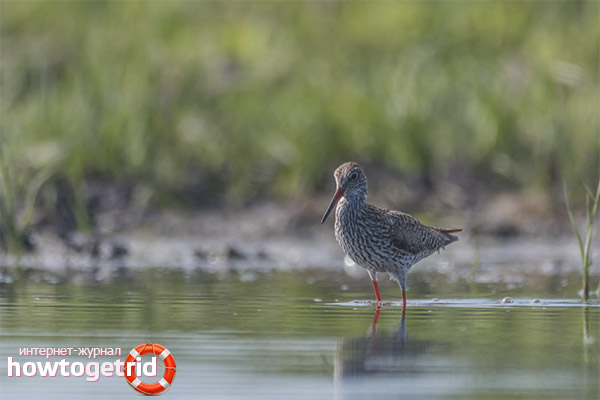 The herbalist is mostly carnivorous, feeding on aquatic and land insects. On land it catches dragonflies, butterflies, picks up and pecks larvae, hunts grasshoppers and praying mantis, eats caught worms. Snails, mollusks, crayfish and tadpoles in the water.Having long paws, it walks through the water and with the help of an oblong beak collects prey from the bottom. She does not shy away from vegetable food, she is happy pecking seeds from herbs.

Because of the bright red color of the paws, the herbalist bears another name - the Red-Knife.

Externally, males can not be distinguished from females, they are very similar in size and in appearance.

For wintering, this species of waders flies off very early - in the middle or end of August, some individuals begin to prepare for long-haul flights as early as the middle of summer - as early as July. Only the most patient postpone the journey until July - there are probably good reasons for this.

During the day, the birds fly a very long way - more than a thousand kilometers. The longest recorded length of the flight is 1320 kilometers.

From year to year this bird nests in the same familiar and familiar place, very carefully masking the nest from idle eyes. It comes to the fact that the hen itself is disguised, hiding behind tufts of grass, learns of danger only by a signal given by the spouse.

By the way, in order to easily notice the danger, the waders lodge near the gulls and terns - they notify, finding unwanted guests or dangerous predators.