Star trophy - care and maintenance in an aquarium

Star trophy is a popular fish, the second name of which is Dubois. Attention to these individuals is riveted mainly because of their unusual color, which is observed in fish mainly at a young age. Gradually, as individuals mature, their color changes, but it still remains beautiful and quite interesting. It is very interesting and exciting to observe how the young change their color, since their color varies greatly. 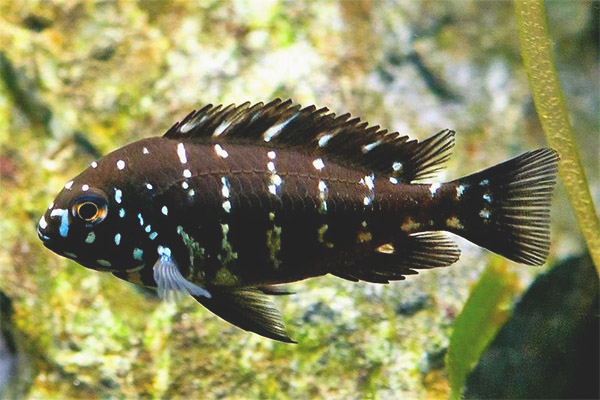 Young fish have a dark color, complemented by blue spots throughout the body. It is for this reason that they got their name - stellate. Adults have a blue color of the head, a dark body, and also a strip of yellow color that runs throughout the body.The strip sometimes has a different color, differs mainly depending on the habitat of the fish. The strip may have different sizes, more pronounced yellow color, may be white.

The trophyses gained their popularity when they were first presented at the 1970 exhibition in Germany. Since then, they remain a hit. Trophies belong to cichlid species, have a rather high cost and are very demanding on their conditions of detention.

Trophies were first isolated as a separate species in 1959. In nature, they can be found in Africa, in Lake Tanganyika. Most individuals live in the north of the lake, because it is here mostly rocky terrain. For these fish, this fact is extremely important, as they collect microorganisms and various algae from rocks, and also have the opportunity to hide here in shelters.

Star trophies do not live in groups, mostly they can be found in pairs or one by one. The trophus lives in water layers at a depth of 3 to 15 meters.

The trophy structure of the body is standard for cichlids living in Africa. They have a dense small business and a very large head. The length of the fish in an aquarium reaches an average of 12 centimeters; however, in larger bodies of water one can also find larger individuals. The color of young males and females is significantly different from the color of matured and matured fish.

How to feed the trophy?

In general, stellate trophies eat almost everything, but under natural conditions they often eat algae particles that are harvested on rocks, as well as eat various plankton from plants or marine inhabitants. At home, trophyov must be fed mainly with plant-based foods. Perfect for this purpose are special blanks for cichlids living in Africa. This diet contains a lot of fiber, as well as spirulina.

In addition, the trophy can be fed with pieces of various vegetables, zucchini, lettuce and cucumber are suitable in this case. In addition to plant based feeds, live feeds can be added. Trophies eat daphnia, artemia and gammarus well.It is better not to feed the representatives of this species with a bloodworm or a pipe worker, since such food can provoke digestive problems in the fish.

You should not give a lot of food at a time such fish, because they have a feature - a rather long digestive tract. Overfeeding can lead to digestive difficulties. It is best to feed the trophus approximately 2-3 times a day in small portions. 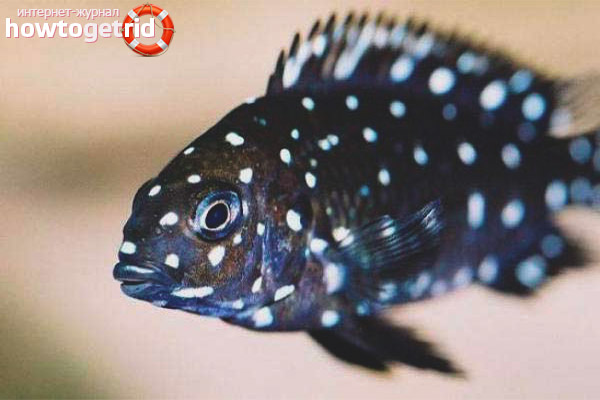 Star trophies are fairly aggressive fishes. For this reason, for their maintenance it is necessary to select a spacious aquarium, the volume of which will be from 200 liters. In this space, it is better to contain about 6 fish or more, as long as there is only one male in such a group. If there are two males, then the volume of the aquarium should be much larger. In addition, in such a space you will need to prepare as many shelters as possible, otherwise you will observe constant skirmishes.

The quality of the soil is best suited sand. In the aquarium will need to make bright lighting - this is necessary in order to accelerate the growth of algae and plants.Inside the aquarium should be placed as much as possible stones, drifts, sandstone and coconuts, so that the fish had a large number of shelters. Plants in this case serve only as food, and are not suitable for anything else. If, after all, there is a desire to create a decor from plants, you should choose a more rigid version, for example, Anubias.

Trophies are rather demanding fish, for them a large amount of oxygen is extremely important, as well as a low content of harmful substances - ammonia and nitrates. Also among the prerequisites - the presence in the aquarium filter and water change every day for at least 15%. Also must be present siphon soil.

It is necessary to change the water every day for the reason that the rare and, moreover, large substitution trophuses suffer very badly. The ideal temperature for these fish is from 24 to 28 degrees, ph should be in the range from 8.5 to 9, hardness - from 10 to 12.

frontosis - care and maintenance in an aquarium

Neighborhood with other fish

Starfish trophies are aggressive fish. For this reason, they are not very suitable for keeping in a common aquarium with other fish.It is best to settle them in a separate container, or next to other types of cichlids. Starfish are less prone to aggression than other types of trophy. Together it is better to settle a group of fish from 6 pieces, while there should be only one male. It is necessary to add new individuals very carefully, because they can die in such a company. 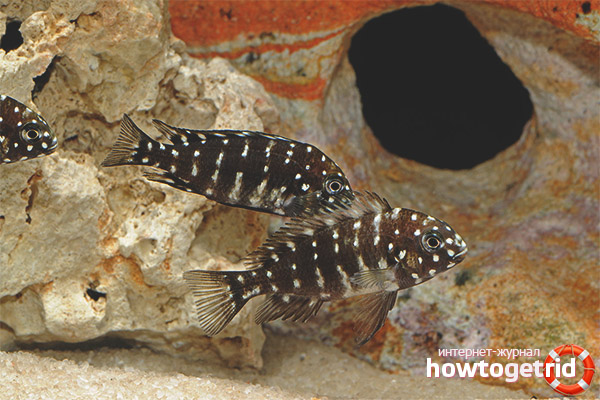 Also adjacent to the trophus catfish can be settled, for example, synodontis, as well as varieties of fast fish, for example, neon iris. Such a neighborhood reduces aggression on the part of males towards females.

In star trophies, individuals opposite in sex have a very similar color and body structure. To distinguish them is quite difficult. In females, only slightly smaller body sizes, as well as a bit less bright color.

Fish breeding by marking eggs, as a rule, produce offspring in the same container where they live. In one tank you can house one male, maximum two, if the aquarium is spacious. A large number of females is necessary in order to distribute the aggression of the male, in which case he will not need to slaughter one of the females.Moreover, the male is always ready to start spawning, in females this process takes place differently, therefore, the choice of female individuals would be an excellent option to eliminate aggressiveness.

Before spawning, the male first pulls out the nest, in which the female then spawns. Then the female takes the calf in the mouth, and the male fertilizes it. The process of carrying lasts until such time as the fry swim. Pregnancy in females lasts about a month. During all this time, the female is in the shelter to protect the offspring. In this case, the fish will eat other foods, but the fry will not swallow.

handsome chromis - care and maintenance in an aquarium