Tinder is sulfur-yellow - description of where the mushroom toxicity grows

Polyporic sulphureus is a type of mushroom belonging to an edible species (4 cat.). Many mushroom pickers know tinder under another, equally common name: chicken, which, in fact, quite aptly characterizes the taste of representatives of this species. 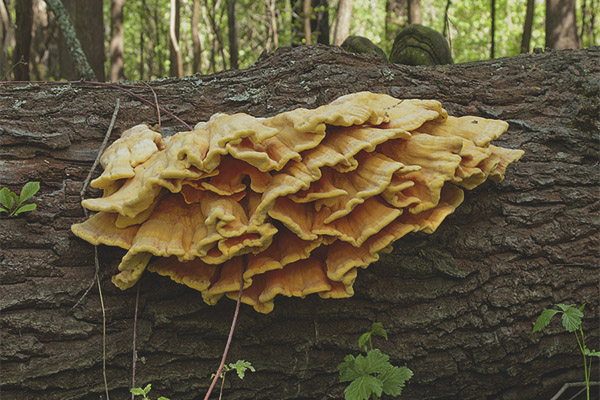 Note that the appearance of the fungus is unique and more similar to the melting of candle wax, thickly encircling the trunks of trees.

The fruit body is fleshy, friable, in fact is a fairly large group of formations fused together (a fan-shaped form), while this accumulation of mushroom bodies has a common basis. Young tinderbugs are characterized by smooth edges of the fruit body, in mature specimens they are thinned. The surface is orange, as it grows it turns pale and acquires a dirty ocher color.The polypore is a rather large mushroom, in sizes it reaches 40 cm, the thickness of the mushroom is up to 50 mm, and the weight is about 10 kg.

The lower part of the chicken fungus has a characteristic tubular structure, the thickness of which does not exceed 5 mm. In young mushrooms, this layer is almost imperceptible, it can be distinguished due to the sulfur-yellow color. The spores are smooth and rather wide, the shape is ellipsoidal, the color is light yellow.

Pulp of a fruit body light with a yellow shade, has sourish smack and pronounced mushroom aroma.

The peculiarity of this type of tinder is that all its parts are covered with a rare down of a characteristic cream shade. On the fruit body of young mushrooms, it is often possible to see the excreted liquid in the form of yellow droplets.

The distribution area of ​​this species of tinder is an area with fairly mild climatic conditions. For growth, the type of soil actually does not matter, since the substrate for its growth is wood (both damaged and living deciduous trees). Chicken Mushroom Harvesting Period - Spring / Autumn.

This type of mushroom grows in a kind of spiral, thickly enveloping the trunk of a tree.Distributed in Europe and North America.

tinder sheep - description of where the poisonousness of the fungus grows

Chicken mushroom of the family of pipe is considered conditionally edible, so it can be used to cook a variety of dishes, however, in its preparation should be aware of some recommendations. 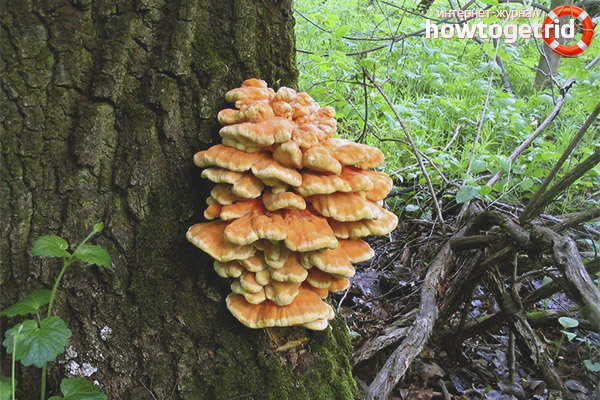 First of all, it should be borne in mind that only young specimens can be eaten, which are cut from deciduous trees. This is explained by the fact that young tinder have a very tender flesh, while its taste is slightly sour, reminiscent of lemon. In the process of growth of chicken fungus, the latter changes not only its color - the flesh becomes too hard, acquires a very unpleasant specific smell due to the presence of toxins in the fruit body.

Also in the preparation of tinder an important condition is the correct heat treatment, after which the mushroom should not change its main color.

It is necessary to take into account the fact that one should not eat mushrooms of this type in large quantities, even after quite a long heat treatment.This results from the fact that at the excessive use of this type of mushrooms allergic reaction, emergence of nausea, dizziness is possible. It is also not recommended to use chicken mushroom to children, women during pregnancy and lactation.

crepitsa - description of where the poisonousness of the fungus grows

Features of the collection

An experienced mushroom picker can easily determine where mushrooms are edible and healthy, and where their toxic and dangerous counterparts are. If you are not sure that there is a tinder mushroom in front of you, in this case it is better to bypass it.

The collection of chicken fungus is carried out from late spring to early September, inclusive. You can find it not only in deciduous forest plantations, but also in city parks and squares.

Only young specimens, which differ from adult mushrooms in a more juicy and bright color and soft flesh, are collected for further processing.

The fruit body is cut by the mushroom knife at the base, while the solid part is not affected. The color of the fruit body on the cut should be white, the flesh itself soft.The taste of tinder is slightly sour, more reminiscent of lemon, the smell is pronounced mushroom. Note that the most delicious tinder grow in orchards.

Chicken mushroom has long been known for its beneficial properties, which is why it is used in traditional medicine. 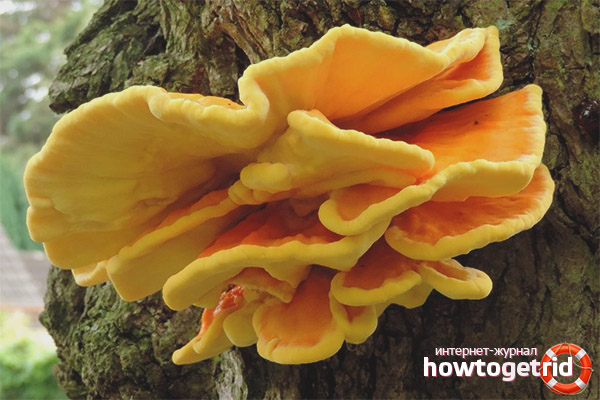 Happy fun - description of where the mushroom toxicity grows

In order that natural medicine does not harm the body and does not cause deterioration of health, all extracts, powders, as well as tinctures based on this type of tinder should be used with extreme caution, following all instructions exactly, and in no case exceeding the recommended dosages. In addition, it is advisable to consult with a specialist (attending physician) before using traditional medicine, the main component of which is tinder sulfur-yellow.

It is also worth remembering that excessive consumption of dishes with chicken can trigger an allergic reaction, headaches, as well as conditions similar to typical food poisoning and subsequent intoxication of the body.

In some cases, tinder is used to repel a variety of insects (for this purpose, the smoldering fruit body of the fungus is used). However, it is important to consider that prolonged inhalation of the combustion products of this type of fungus can lead to the appearance of hallucinations, which is caused by the presence of resinous substances in it.

Chicken mushroom is contraindicated in women during the period of childbearing due to the possible toxic effects on the developing fetus.

Subject to the few recommendations, simple rules for the implementation of the collection of this type of mushrooms, its mandatory heat treatment and preparation, as well as the correct use as a home remedy, tinder will not harm the body, but on the contrary - it will bring significant benefits.