The bird Uragus belongs to the family Finch. The species belongs to the genus of lentils. Hurricuses have an external similarity with these birds, as well as with bullfinches. For this they are popularly called the long-tailed bullfinch. 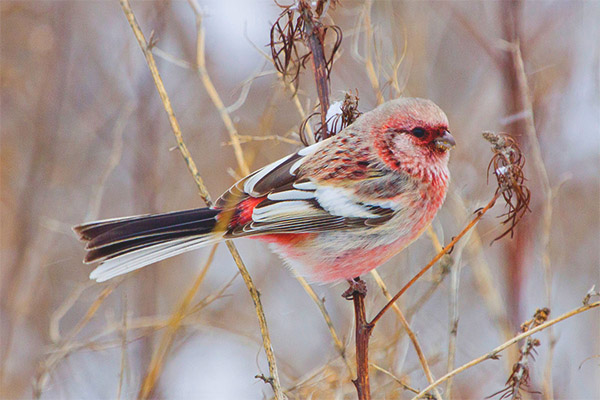 These birds are almost the same size as a sparrow. Their body weight is 16-21 g. The length of the body of a hurricus reaches 20 cm. This length is due to the fact that the bird has a long tail. The wingspan of this small bird is about 24 cm.

These birds are quite easy to distinguish from others. This is especially true of males. They have bright plumage. In particular, they stand out in the winter against the backdrop of snow. On the head and neck plumage is colored in a reddish color. The tail and wings have contrasting plumage in a combination of black and white. Small silvery specks are visible on the chest and on the head of the Uragus.

Fact! The greater the age of the male, the brighter the color it becomes.

In females, the plumage is not so bright. Their body is covered with gray feathers.Sometimes reddish and black blotches come across. Young individuals of both sexes have the same plumage. The beak of these birds is yellowish-brown. It has a small size. A distinctive feature of the appearance of a hurricus is the large tail, which they use to control the flight.

Uragus feeds mainly on plant food. These are seeds of flax, nettle and other plants that grow in the bird’s habitat. The bird's beak is so small that it cannot eat even large seeds. She has to look only small. They bring various small insects to their chicks in the nest. Sometimes they include them in their diet.

A lot of these birds live in Asia. They can be seen in countries such as China, Korea, Mongolia, etc. Hurricuses also live in southern Siberia. In recent years, the habitat of this species has shifted somewhat. They are met in regions located to the west in relation to their usual habitat. Sometimes they fly over to the west of Europe.

They do not fly away for wintering, but they belong to migratory birds.They remain in place only when they build a nest, incubate and feed offspring. The nest they build is usually in the bush. They wander in small groups, sometimes in pairs. Most often, they fly from place to place along the river valley or railway.

There are 3 subspecies of these birds. Each of them lives in a certain area. They differ from each other in their size. 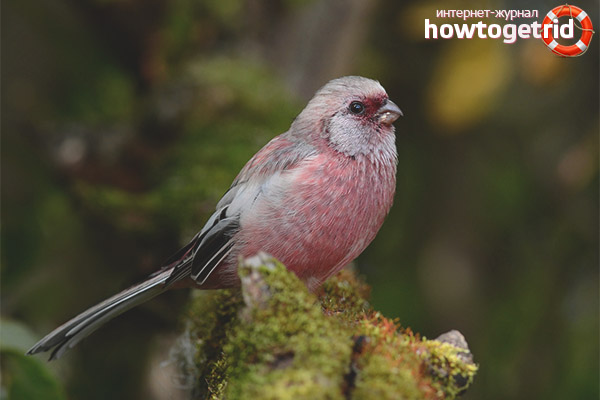 For this type of characteristic sexual deformity. The male can be seen by the bright color, while the females have gray plumage. There are very few bright patches on it. But at a young age the coloring is the same for everyone. Males become brighter only by the age of 3 months. If you keep the bird at home, the male can lose all his beautiful coloring. After molting, he often grows the same gray feather, as in females.

These birds are quite peaceful and friendly, they sing beautifully. Therefore, many keep them at home. Sometimes one bird lives in a cage. Some keep them in pairs.

Cell
To make a hurricus at home, it is necessary to prepare a cage at least 80 cm long and almost the same width. It is recommended to install it in such a place as to provide natural lighting to the bird. The cage should be with vertical bars. In it you need to put a few poles with wood bark, on which the bird can sharpen its claws.
For the female it is necessary to make something like a house that can serve as a shelter for her. She will use it during the nesting period.She should have a place where she can hide from the male, as they can behave aggressively. In addition, it is necessary to equip a place for swimming.

Feeding
Since birds in nature feed on grains and seeds, feeding them is not difficult. The usual mix for canaries, which contains seeds of plantain, dandelion and other wild herbs, is quite suitable. Additionally, it is recommended to give them berries, greens. And when the birds nest, they need to be given insects. Since their beak is small, feed should be crushed. They need to change the water as often as possible. 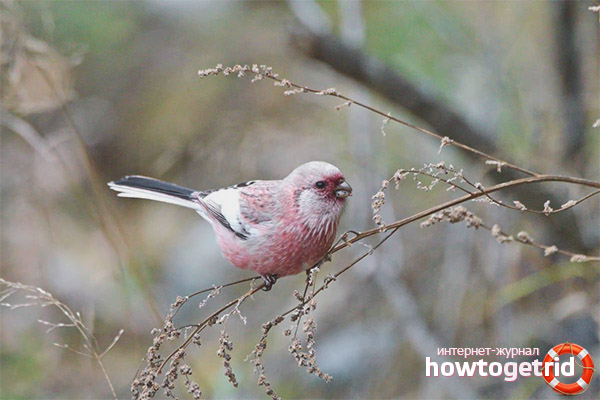 When kept in a cage, these birds can also produce offspring. The female lays about 4 eggs of a bluish color. The incubation period is about 2 weeks. Parents care for chicks for about 20 days.

Ugarus sing quite melodiously. This is what attracts bird lovers. Uragus singing is rather monotonous, but they are able to replicate the sounds that other birds emit. The singing of the males is more beautiful, they can make trills.