The duck got an interesting name due to its origin and interesting color. This bird is considered to be the most beautiful among themselves. As you can see, nature created this bird because it was very inspired. But we will not retreat from the main thing, because today we are considering everything that affects the individuals of the presented species. Birds have long been considered favorites, so they cannot be ignored. 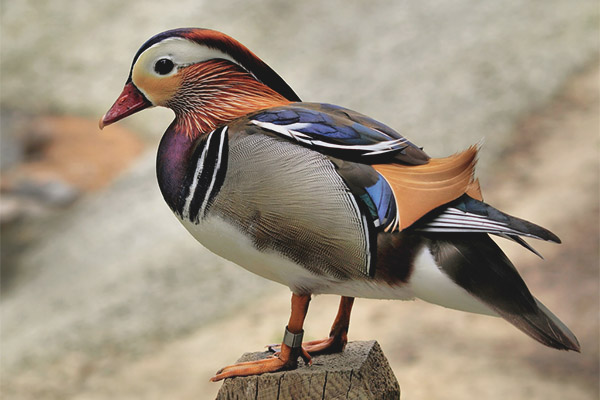 China is considered the birthplace of birds, it was there that in honor of the Chinese officials mandarins, this individual got its name. It's all about body coloring and interesting behavior.

The Chinese have devoted so much time to the birds, settling them in artificially created and natural water sources, that the mandarins completely sunk into their souls. The bird, a symbol of well-being, successfully existed in the gardens of the elite.

Today, these individuals are distributed in the Far East, as well as in East Asia.Some of them spend winter time in Taiwan and in China. The largest flocks can be found in Japan and England. Among these birds, migration is considered quite normal.

On the expanses of our homeland, they settled in the Khabarovsk Territory, on Sakhalin, in the Amur basin. They live in almost all large zoos of Russia and Europe. The main thing is that the winter was warm and comfortable for these individuals.

The bird belongs to the duck family, its size is medium-sized. This is a forest duck, whose body weight is in the range of 0.5—0.7 kg. The wingspan reaches 70 cm. The wings are not too large, but when opened the bird looks impressive and bright. The tail is medium in length, helping individuals to fly and maneuver between trees.

Birds male sex bright and colorful. Since the males do not incubate eggs, they do not need to disguise themselves as the environment, which is not the case with females with their dull appearance.

Mandarin in its natural features are very kind, sociable, interesting birds. They prefer to settle in flocks in the winter, and when the onset of heat break up in pairs.

These birds have enemies in their natural surroundings. Among them are otter, ferret, mink, and raccoon dogs. Birds are threatened by large-scale catches and export shipments.

Another enemy is the hunter, who, directing his rifle at a bird soaring in the sky, cannot immediately recognize in it a tangerine. If we add to these factors colossal deforestation, it is easy to understand the reasons why the population is declining.

Individuals of the species of the species have a particular benefit to society. They live in gardens and parks, and also get along well with ducks of other breeds swimming near people. Bright and beautiful, they became the favorites of regular visitors to public gardens and gardens.

Birds eat different foods, the diet depends on the season. In summer, they eat frogs, worms, mollusks, small fish. In winter and in autumn, they prefer vegetable food, eating acorns and cereals.

In the springtime, the menu becomes mixed. Tangerines consume snails, seeds, insects, horsetail shoots and other crops. Birds prefer to eat at dusk time or at dawn. The rest of the day, they are located near water sources and on top of trees. 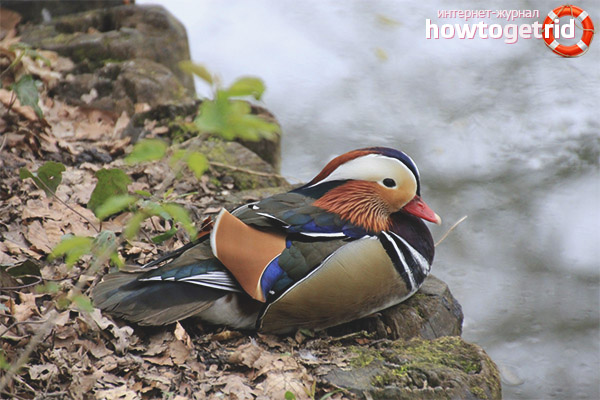 Birds reach sexual maturity after one year old. When the mating season begins, the males with great activity try to please the females. They whistle, smoke, reveal their full color tail, clean the feathers of their chosen one and try to win her love with all their might.

It is due to the marriage rituals and the relationship of these individuals among themselves, the Chinese believe that the mandarin tea promises a successful marriage and love. In all houses there are statues of these birds, symbolizing the welfare and loyalty. These birds make a pair for life.

A female individual chooses a place for the future construction of a nest, the male does not move away from it all this time. Mandarin houses are built in a dense forest, where there are ponds or lakes. They prefer to dwell and hatch eggs at a height of 5 to 10 m.

The future mother warms the home for posterity with her own down so that it is always warm. The male only protects the female during the incubation period when she hatches the eggs.But he does not do it himself.

The female makes laying up to 10 eggs during the week, so the babies come to light with a certain short interval. When the last egg is laid, it starts hatching.

The duration of the incubation period can be up to a month. Every day, the mother of the future offspring loses its feathering color to get as close as possible to the environment. When the babies are born and strengthen, the parents take them to the reservoir and begin to closely engage in education.

Many experienced poultry farmers are engaged in successful breeding mandarins. Such ducks get along without any problems as pets. Often, the owners are engaged in breeding birds just for fun. Individuals have a unique and very beautiful appearance.

It is worth noting the interesting fact that even though such birds belong to the duck family, hybrids with other birds were not seen in the wild. The fact is that in the examined individuals the structure of chromosomes remains unchanged. That is why it is impossible to meet a mixture of mandarins with other individuals.

Mandarin as a symbol of well-being

In Southeast Asia, the individuals in question are popularly considered to be a symbol of a happy marriage and love. If you study the ancient Chinese legend, it is worth noting that the official decided to part with his wife. He did not know how to communicate such news to her. To refresh his mind, he went to rest in the pond. 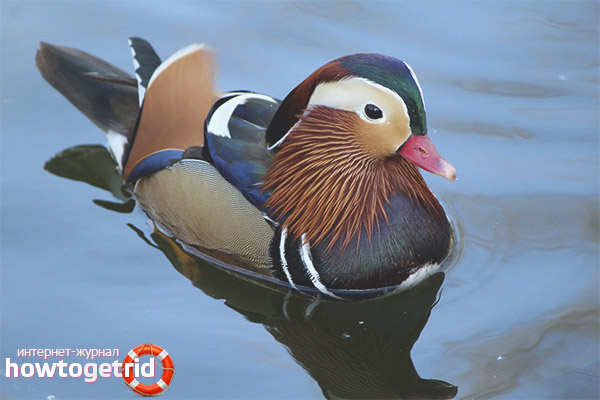 After some deliberation, ducks caught his eye. The official was surprised at how the birds show feelings for each other. The ducks always swam together, cuddled and cleaned their feathers. Looking at this, the adviser realized how much he loved his wife. His heart melted. It is because of this legend that mandarin is considered the savior of marriage.

Therefore, it is recommended to hang pictures in the house or to put figures with the image of mandarins. As a result, family relationships will improve significantly. The partners have a feeling of euphoria and greater affection. To this day in China, the newlyweds are given a couple of mandarins for the wedding. Ducks bring prosperity and good luck in the family.

Mandarin ducks are amazing ducks that are not at all like their fellows. Such birds are considered almost holy. In various countries with a rich ancient culture, one can find many legends in which mandarin is mentioned. Ducks have incredible beauty.