This animal is a representative of the detachment of the artiodactyls. It belongs to the family of so-called bovids. Accelerator became a goat due to its extraordinary shape of horns. In males, they are flat, rather large. The unusualness of the horns is that they are twisted into a spiral. 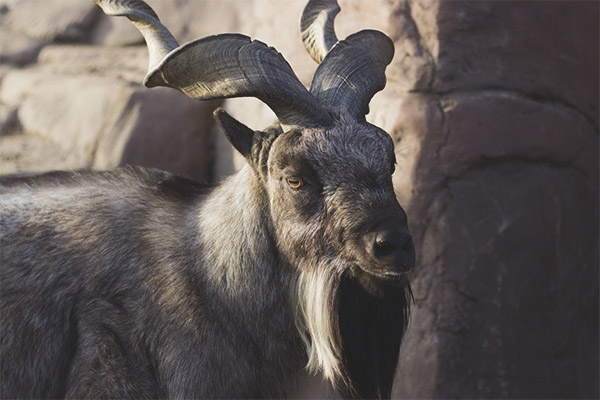 The fact of the existence of absolute symmetry of horns is curious, and if we consider them closer, we can see that the left horn has a rounding to the left side, and the right horn mirrors the shape of the left one. In adult males, the height of the horns reaches 1.5 meters. In females, these processes are much smaller, usually do not exceed the size of 20-30 centimeters, but the symmetry is the same as the representatives of the male sex.

With regard to size, the length of the body of goats can reach up to 2 meters, the height at the withers is usually a maximum of 90 centimeters,and the largest weight of the animal is usually about 95 kilograms. All this applies to males. If we talk about females, they are much smaller than males, and therefore the indicators of size and weight are also small.

In horned goats, the color changes depending on the season. Also changes the thickness of hair. The winter period paints animals in a reddish color with shades of gray, even gray individuals can also be found, and occasionally there are goats with a white color. Wool in winter is very thick and long. In summer, the color of the animals becomes bright red.

If you look closely at the goat, you can see the suspension (beard) of long dark hair, which is located on the chest or neck of the animal. In winter, this suspension is very thick, in the summer more rare and not so long.

The hair on the neck and chest of the goat is very long and has a white color with meeting black strands.

Very often, horned goats can be found on steep slopes, and wonder how they keep on such a significant bias and at such a high altitude of more than 3 kilometers. This type is considered very hardy, and also demonstrates exceptional dexterity.These qualities allow the goat to quickly climb the rock in order to find the necessary vegetation, which you can enjoy. The horned goats in Pakistan, India and Afghanistan, more precisely - in the mountainous parts of these countries. It can also be found in Turkmenistan and Tajikistan. 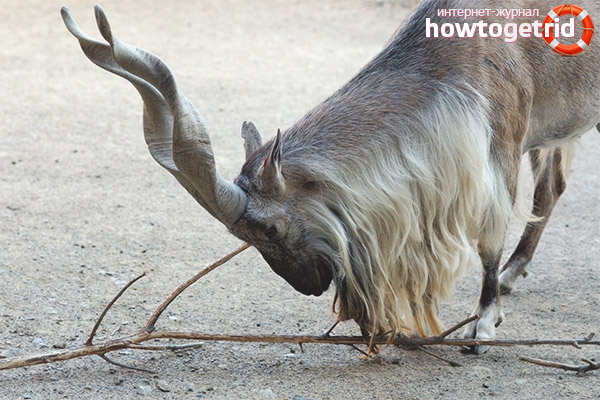 In winter, the flock can be replenished with males, and the number of heads increases almost several times. For a long time, flocks with a livestock of one hundred individuals of goophorns met, but now such cases are quite rare.

The average number of a herd today is about 20 animals, and most are adults, most often males. Females, due to their small size and weakness, sometimes die, even before reaching mature age.

The nature of the male goat is not at all soft and sometimes even very aggressive.If two males do not share something, they can start a fight. Such battles usually take place on the edge of rocks or gorges, which is associated with a great risk to life.

The location of the herd depends on how the goat will move. He can do it vertically up or down, climbing or sinking over rocks depending on the season. For example, in summer goats can be found at the highest points of steep cliffs or mountains, while in winter they descend significantly lower due to the fact that it becomes harder to get food under a large thickness of snow cover. Sometimes, if danger lurks at the bottom of the goats, they stop the descent.

Most goats prefer a cool season. It is then that they are most active and can feed or frolic all day. Usually feeding occurs in the morning and evening. If the weather is quite hot, then representatives of the species tend to hide from the heat in the shade of rocks or tall trees. In the daytime, goats can be found in open space, but in the evening they prefer to hide in the rocks, as they fear meeting with the enemy or bad weather.

Among the natural enemies of animals include predators such as:

Most often young individuals suffer from predator attacks. That is why, after an active replenishment of the herd in the spring, not all individuals survive by autumn, and in the fall the number of young stock is almost halved.

Also dangerous for markers is the man who kills these animals because of the unusually beautiful horns. And, despite the fact that the hunt for markhurov is prohibited, it does not stop poachers at all.

As already mentioned, the markhurs usually eat in the morning or evening hours. In spring, the main food of the horned goat is accustomed to their habitual vegetation, which includes: 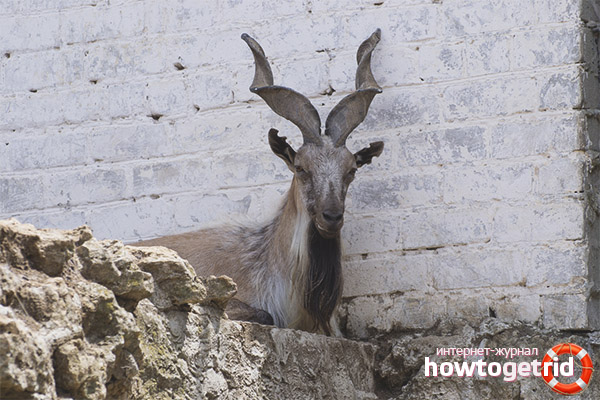 In the spring, representatives of this species are also not averse to feast on fresh shoots and leaves. In the autumn, the goat’s diet does not practically change, only young leaves come to replace dried out leaves. In winter, when all the foliage has fallen and dried completely, the goats feed on almond, honeysuckle or pine needles.Sometimes in the diet can be found maple.

Due to the fact that the vegetation in the mountains is sometimes rare, the Markhor have to periodically make descents to flat surfaces. And during the descent mountain goats love to feast on the bark of trees, which negatively affects the restoration of the forest.

The most favorite food of goats is evergreen oak. In the summer it pleases with rich and juicy foliage, and in winter the horned goats feed on acorns. In order to quench their thirst, animals descend to mountain streams or rivers, and can also be saturated from the reservoirs formed after the thawed snow. In winter, the goats do not even need to look for a reservoir - they can use snow as a drink. 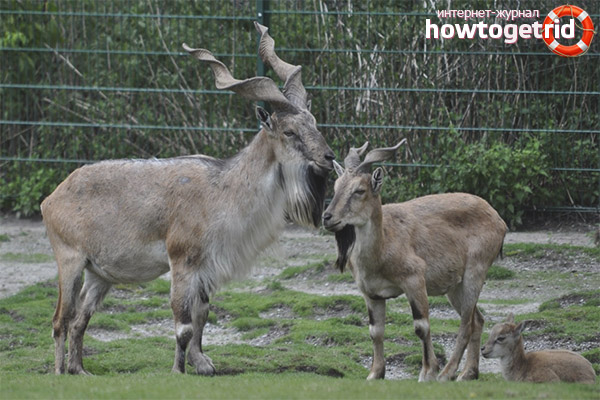 Gon in representatives of this species begins in November and lasts until December. Most often, males who have attained three years of age and puberty take part in the rut. The rutting process takes place in the form of a constant struggle for the attention of the female, and as a result a so-called harem group is formed around the male, consisting of about 6 or 7 species of mature animals.

The fetus is harvested by a female for six months, after which one or two goats are born.Births usually occur in the spring. The first steps of the kid are able to do the very next day after the birth, and throughout the entire period of growing up, the baby tirelessly follows the mother. The first few days the kid feeds on young shoots and grass, as for feeding with milk, it is carried out until autumn.

The child reaches puberty upon reaching the age of two, but this applies to males. Females mature one year later.

Most of the offspring die in the first months after birth, and this is due to the harsh conditions in which these animals are found, dwelling on the rocks and getting food for themselves. On average, markhor goats live to 10 years, and very rarely they die of old age. The cause of death is human behavior - the hunt for rare species of horned goats, as well as the living conditions of these animals themselves, who have to flee from predators or avalanches from the mountains in winter.

The horned goat is listed in the Red Book, as the population of this species of animal is rapidly declining. Humanity directs all its forces to preserve this species, protecting it from extermination by poachers and creating all conditions for the continuation of the species.So, for example, several nature reserves have already been created, where there are horned goats. Animals are under careful protection and are also periodically observed.