Antarctica is the only continent on earth where frosts constantly rage. But even in such conditions, unacceptable for many animals and birds, there is life. The most famous inhabitants of this always cold mainland are penguins. They are already 18 species - royal, imperial, small, spectacled. Everyone knows these graceful funny birds wearing a tail coat. But few people know that they live not only on the southernmost continent of the planet, but also in more northern regions, in the so-called sub-Antarctic zone and even in the south of North America. One of them is a crested penguin. 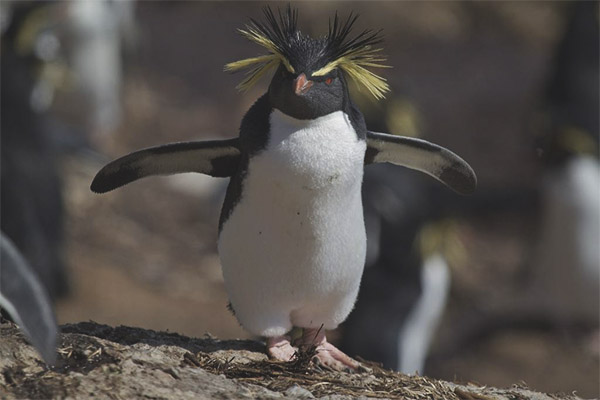 Crested penguins (climbers) are divided into three types: northern, southern and eastern. North lives on the Amsterdam Islands, south - on the Chilean and Argentine coasts,

All of them are small in size - up to 55-57 cm long, weigh about three or four kilograms, however, during the molting period, it recovers and becomes heavier by 2-3 kilograms.The back, small head and wings of black color, on the edge of wings there is a black strip, and the throat, chin and cheeks are white. The body is covered with small feathers, consisting of one rod, up to 3 centimeters long, at the crown they are slightly longer.

The eyes are dark red in color, very small, above them are yellow narrow eyebrows, from which two forelocks stretch to the top of the head, giving the bird a name. The thin black beak is rather long, pointed at the end. Short fat legs are almost completely enclosed in the skin of the body, so the steps are short and as if jumping. On the paws of four fingers, three of which are connected by a membrane. Males and females differ only in size - the males are larger.

Tasmania, Falkland and nearby islands are inhabited on Tierra del Fuego, Amsterdam Islands, the southern coast of Chile and Argentina.

Crested penguins are completely unsuitable for a single lifestyle, they unite in huge colonies of more than 3 thousand individuals. They love to live not only on the sea coast, but also on rocky ledges, choosing sites near fresh water, as they need to be drunk.On those islands where there is a lot of soil, they even dig up mink and nesting niches. They communicate with each other, loudly making harsh sounds. And during the mating season, there is an incessant hubbub around the colony. Despite the good-natured look, to strangers and uninvited visitors have an aggressiveness. Seeing an uninvited guest, they start screaming, bouncing and stomping. At the same time they twitch their shoulders, fluff up their eyebrows, spread their wings and lower their heads ominously. If a stranger does not want to get out, the defender starts to fight - hitting his head, wielding wings, poking with his beak.

In relation to each other are always friendly and good-natured. When meeting with lovers males stomp, enthusiastically shout and pull to her friend's neck. Females exhibit the same responsive feelings. Active during the day, sleeping at night.

The marriage period begins depending on weather conditions - from June to December. To get a female, the fight for her begins, literally, between men. Two pretending males are facing each other with their wings spread wide, beating each other with their heads and shouting loudly, trying to intimidate the opponent.The winner of the tournament sings loudly, proving to the future spouse that he is good and exemplary, and when the female gives in to “persuasion”, a family is formed. 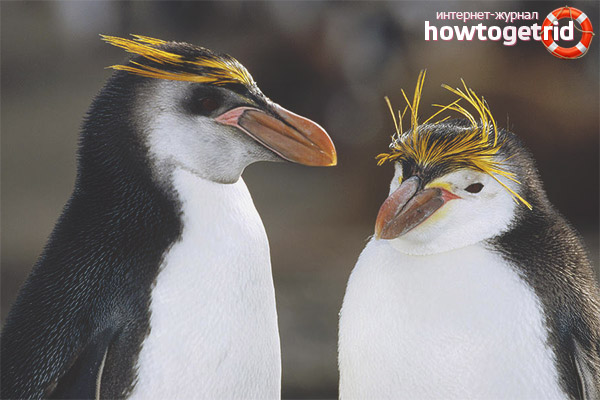 The nest is fully equipped with a male. The house is built in a dug hole of twigs, pebbles and grass. In October, the female lays 2 greenish-blue eggs: the first is small, the second is slightly larger. As a rule, the small one dies, and the female incubates one egg for almost a month, then leaves the nest and all worries fall on the shoulders of the head of the family.

He hides an egg in one of the folds on his stomach and does not part with it for 4 months, until the cub appears. The baby is born, the mother comes in and starts feeding the chick, belching food. The young animals are sent to the so-called “kindergarten” - a colony of the same young chicks, where they learn all the wisdom of life. At this time, parents get their children food. At 10 to 12 weeks old, molting takes place among the young, they become like adults and already swim in the sea and are looking for food. 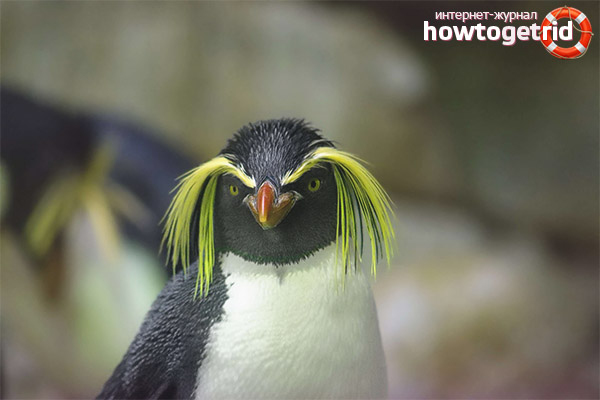