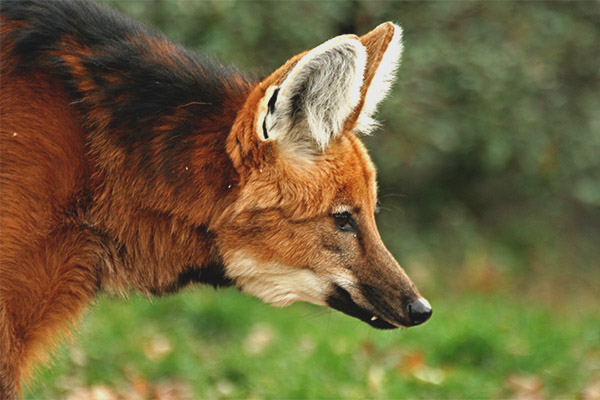 In fact, this species has nothing to do with the fox. They do not even have vertical pupils, which are a mandatory attribute of the appearance of foxes. The homeland of these amazing animals is South America.

These animals live in Brazil, Bolivia, Paraguay. They prefer to live on plains covered with grass and bushes. You can also see them on the outskirts of the marshes. In the mountains, these wolves do not live. As a rule, they lodge there where a large number of various small rodents and other animals live. Mane wolves prey on them.

A distinctive feature of animals of this species are slender legs.They are quite long and thin. But this feature does not make these animals fast runners. Long legs allow the animal to see better over fairly long distances. This helps wolves not only to hunt prey, but also not to become a victim of a hunter who can wait for him.

These predators have a rather soft coat. The shape of the muzzle and neck is very similar to the outline of a fox. They have an elongated shape. Maned wolves are distinguished by flat chests, erect ears, and a rather short tail. Their coat, although soft, is very thick.

Representatives of this species have a reddish-brown color, but on the tip of the tail, as well as on the chin, their wool is light. On the legs the coat is painted in a dark shade. In the neck it is longer than the rest of the body. If the animal is frightened of something or is trying to frighten someone, then this wool will stand on end.

This feature is the source of the idea of ​​the name of the species - the maned wolf. Like other members of the canine family, these animals have 42 teeth. Depending on the situation and situation, maned wolves are capable of making various sounds.They communicate with each other with the help of a loud and rather long-drawn howl. To scare and drive away rivals, they use a deaf grunt. At sunset, they can be heard loud barking.

On average, the body of an adult animal has a length of 1 m 25 cm. The length of the tail varies from 28 to 33 cm. The weight reaches 22 kg. As a rule, in the wild, a maned wolf can live for about 12-15 years. The case when the wolf lived 17 years is fixed. Among the representatives of this species is very common plague.

Like all related species, maned wolves tend to be active at night. At this time they go hunting. A day for them is a time for rest. To see a maned wolf in nature is very difficult. After all, these animals on the planet are not so many. There is a threat of extermination of this species, and they are very afraid of man. 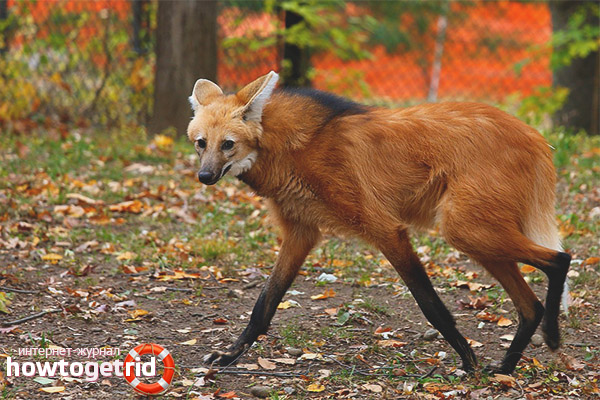 Hunting of maned wolves lasts a long time. They are waiting for their prey, sitting in wait for a long time. He attacks only when he is waiting for the right moment. Due to the large ears, the maned wolf can hear prey or threat even from a distance. And thanks to the long legs of the wolf can see the victim even in the tall grass.

The predator first knocks on the surface of the earth with its paw to frighten its prey, and then attacks it with a quick jerk. Hunting ends in success for this clever predator almost always. His victim, he leaves no chance to survive.

In the wild, males and females of this species live together in the same territory. At the same time they go hunting separately. At bedtime, they also disperse to their usual places. Interestingly, when keeping wolves in captivity, both the female and the male are engaged in raising their young together.

Males fiercely guard the territory in which they live. If any uninvited guest descends there, he is expelled from there. But among themselves, these animals do not show aggression. Their attitude can even be called good-natured. Attacking fellows is extremely rare.

By nature, the representatives of this species are loners. Life in the pack is not peculiar to them. Among representatives of the animal world, maned wolves have no enemies. Their main enemy is man. People usually shoot them when predators climb into their sheds to steal a bird.

The basis of the diet of the maned wolves is various small animals. They can eat and birds, and snails, and eggs, and various insects. As a rule, they swallow their food whole, practically without chewing it. This is due to the fact that the jaws of these wolves are very weak. With large animals, they can not cope. Therefore, wolves do not attack such animals. 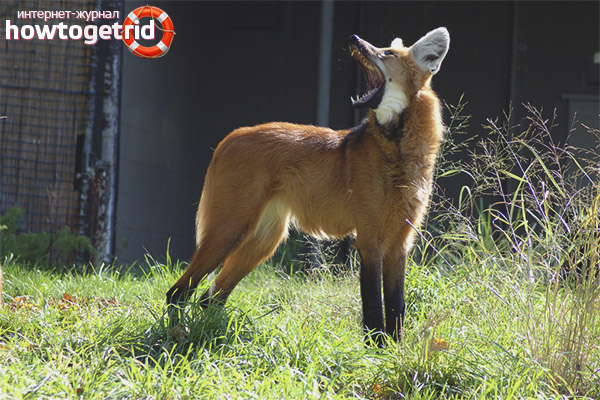 Their jaws are not capable of breaking hard, large bones. Often, maned wolves raid barns with poultry, which is why they are human victims. But such cases are quite rare. Cases of attacks of these animals on humans are unknown. They show friendliness not only in relation to each other, but also to people. The maned wolf’s diet includes not only meat, but also vegetable food. They love to eat bananas. Another favorite food of these animals - wolf berries. These are very poisonous fruits, but they help the wolf to escape from a large number of parasites that inhabit it in the body. When strawberries and strawberries ripen, the maned wolves also eat them with pleasure.

The mating period of the maned wolves usually falls in the period from October to February or from August to October. It depends on where exactly the animals live.At the time of reproduction affects the hemisphere in which wolves live. Their interesting distinctive feature from other canines is that they do not dig holes, but remain on the surface.

The duration of pregnancy in females of this species is approximately 2 months. After that, 2-6 cubs are born. Puppies are born in the winter. After birth, they weigh about 400 g, but the young grow and develop quickly enough. After 8-9 days, they already open their eyes, and after 3 weeks they get ears. Small puppy maned dogs are distinguished by their curiosity and playfulness. Males are not engaged in raising babies. Females raise them, feed them, and also teach them to hunt and survive in the wild.

Interestingly, puppies are born with short legs. In the process of growth, their length gradually increases.

A very important feature of these animals is that they never attack humans. At least, such cases were never recorded. As a rule, they are distinguished by their normal, peace-loving behavior towards both people and their brethren. Unfortunately, every year the number of these animals is steadily decreasing.This species is listed in the Red Book, as there is a great danger of extinction.