Many times the big pandas became the heroes of various films and cartoons. They are popular with children and adults, and even became the national emblem of China. Meanwhile, these funny animals are listed in the Red Book, and every year people take attempts to save this species from extinction. 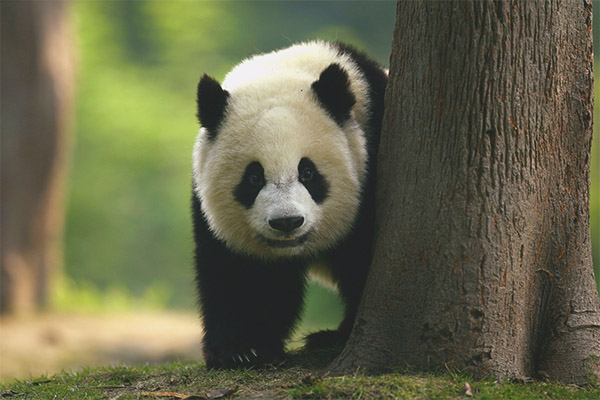 The history of the study of the species

Panda has a fairly long history of study. For the first time a man showed interest in them 3 thousand years ago. Then they settled the entire territory in the South and East of China, being a fairly ordinary animal for those places. The main problem of studying the big panda was the question: what should I call, and what species should this animal be attributed to? They tried to make her a bear, a fox, and even a tiger. For a while she was officially recognized as a giant raccoon.Such a number of contradictions and disputes is explained by the appearance of a panda and the presence of a relative - a small panda (which was unconditionally considered a raccoon). Combining the signs of various animals, the big panda confused scientists for several centuries until it was attributed to a separate species from the bear family in the 20th century.

Large pandas are quite different from each other in body size. The length of their bodies can reach 180 cm, and weight ranges from 20 to 160 kg. Traditionally, males are approximately 1/10 of their body mass and bone length larger than females. Big Panda has a recognizable color. Its paws, ears and the area around the eyes are black, while the rest of the body is white.

Their limbs are thick and short, with a dense dark sole. On hind legs there are sharp claws. Bare fingertips help large pandas cling to bamboo branches and hold them. The front paws differ from the hind legs by the presence of an extra toe (to the five ones). Strictly speaking, this is not a full-fledged finger, but a carpal process with increased mobility.She panda manages with thin bamboo shoots, which she is not always able to keep his paws.

Large pandas have a large rounded head with a blunt snout and large ears. Ears, by the way, always have a standing position. The eyes are very small and difficult to see among the thick black wool.

The years of evolution have affected these animals, and now their teeth and jaw are different from bear ones. It is caused by the fact that pandas have to chew on a large amount of bamboo, which reaches 30 kg per day. Animals eat not only the stems and leaves, but also the bamboo stem. However, it does not cause them any harm, since the stomach of the large panda is lined from the inside with a layer of mucus that prevents the penetration of bamboo chips into its walls. During the absorption of food pandas take the pose of a person sitting on the floor. It helps them to keep their front limbs free to keep their food. 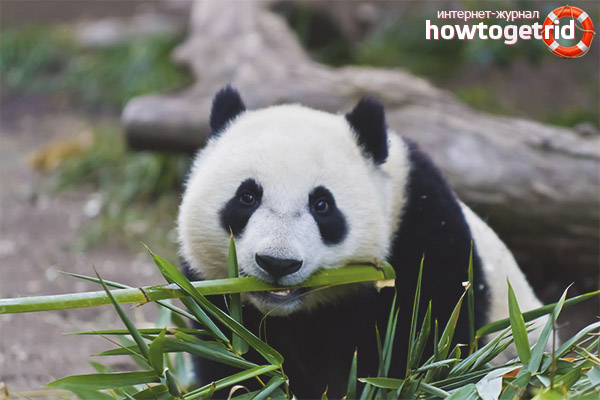 In nature, large pandas dilute their diet with chicks, bird eggs, carrion and small rodents, as well as insects. They are omnivorous, and such food gives them a much needed protein.Despite this, eating only animal food from a big panda will fail. There are cases when after the destruction of bamboo forests there was a massive death of these animals due to famine.

In addition to food, bamboo gives shelter to pandas. In dense thickets they rest, give birth to young, are restored after illnesses. The highland bamboo forests attract pandas in the summer, giving the animals a cool shade. In China, 300 species of bamboo grow, but only 10 of them are edible for large pandas. Therefore, animals always know about spare thickets, which can be moved in case of drought or bamboo death.

Big pandas have a calm character. They do not show aggression in relation to other animals and their relatives. They have greetings, warnings, complaints. All this is accompanied by a variety of sounds, including: bleating, roaring, humming, whining (in kids). Pandas shriek to show that they hurt, or that they are ready to obey. To threaten the enemy, the panda makes a slurping sound, quickly opening and closing his mouth.

Large pandas do not have their own homes.They may temporarily occupy empty burrows, caves and crevices in the rocks to hide from the weather. They do not hibernate, but noticeably reduce their activity in the cold season. During this period, they prefer to spend time among the foothills, not climbing to a great height. Crawling pandas, by the way, swim even better. Despite such abilities, the animal rarely does this, preferring to lie on a solid branch after a hearty meal.

In the wild, pandas reach maturity at the age of 4.5 years, and begin reproduction two to three years after the onset of this period. Mating season lasts 2-3 months, taking the spring season. Pregnancy lasts from 3 to 6 months. Such an amplitude of terms is due to the fact that during the development of the fetus all sorts of delays can occur, so there are cases when the gestational period is stretched twice. But this feature allows you to give birth to offspring in a more favorable time of year.

Big pandas are not particularly fertile, and in captivity things are even worse. Until the early 2000s, there was not a single documented case in which a female panda gave offspring outside of wildlife.

The weight of newborns is small and is only 100 grams. with a body length of 15 cm. In the first days, their skin is already covered with a rather thin layer of wool, which the mother constantly licks, thus taking care of her child. At the same time, if another cub is with her at this moment, even the slightest attention is no longer given to him. Therefore, the big pandas can not feed two cubs at the same time and produce offspring every 2 years.

Such depressing, at first glance, the rate of reproduction of the population leads to the fact that the number of species is constantly under threat. On the other hand, among large pandas there is no competition for habitats and food, which allows them to maintain a life expectancy of 20 years. In addition, knowing the loss of interest of the female to the first calf, the staff of the zoos replace her cubs, periodically leaving one or the other with the mother. It saves the lives of both animals.

Although the big pandas have a peace-loving character and sweet appearance, they retain the signs of a predator and can pose the same threat to humans as any bear of similar build. They are equipped with strong muscles, sharp teeth and claws, as well as physical strength.

Life in captivity and species conservation 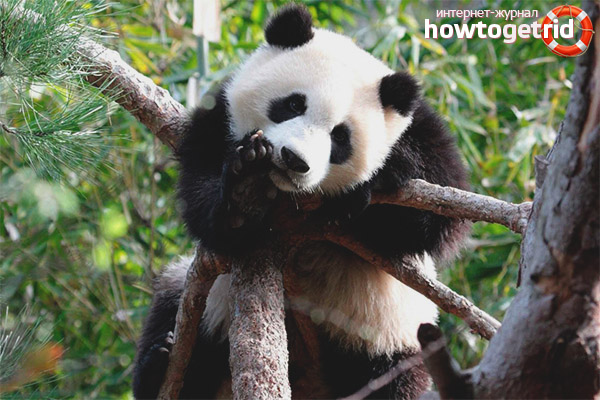 Because of the secretive lifestyle of a big panda, her fur is hard to get, which raises the price of it. It attracts many poachers who are not stopped by threatening fines and prison sentences. Besides the fact that the skin of a large panda is valued for its appearance, it is often credited with useful magical properties, for example, the ability to bring good dreams. Because of this, the popularity of the panda fur mats remains.

Until recently, big pandas were threatened with extinction, but now their status has changed to a “vulnerable position”, which is caused by a slight recovery of the population.

Despite the popularity of large pandas, they are kept only a few zoos in the world outside of China. This is connected not only with difficult maintenance conditions, but also with China’s tough policy in this area. The big panda is forbidden to take out of the territory of the country or buy it from anyone else. The zoo can only rent an animal for a period of 10 years, for which 1 million US dollars will be paid. At the same time, the Chinese government reserves the right to own all bear cubs born in captivity.

The low number of individuals in nature is associated primarily with human activity. Of course, the low speed of reproduction of the population also plays a role, but not so significant. As mentioned earlier, the disappearance of bamboo forests leads to starvation of animals. Due to the shock pace of industrialization in China, the number of bamboo forests cut for economic needs is growing rapidly. Therefore, it is necessary to create zones protected from human exposure.

The symbolism of the big pandas

Since ancient times, the big panda had a special relationship with people. These animals were revered in China as a symbol of peace and friendship. Now the Chinese are proud to call the big panda their national treasure. She deserved this title not only because of her beautiful appearance, but also because she possesses qualities that Chinese society so appreciates - calm, endurance and high intelligence. 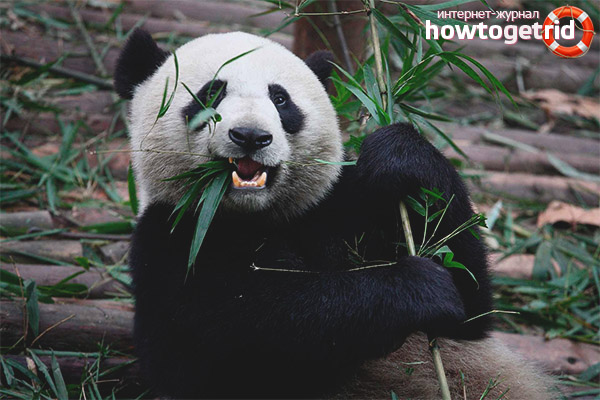 The ancient philosophers and wise men paid attention to the symbolism of the animal. Initially there were attempts to tame pandas as animals that help in the conduct of wars.However, it soon became clear that, despite its impressive size, these animals do not show aggression and are not suitable for these purposes. Then they were bred at the imperial court for entertainment, and the pundits noticed that the coloring of the big panda has a connection with Yin and Yang, embodying the harmony of the flow of these energies. This influenced the fact that the big panda finally got a worthy place in the history of China.

An interesting appearance made them heroes of traditional Chinese and Japanese painting. Artists dedicated a whole series of drawings to this animal, seeking to convey its beauty and habits. Often they were depicted on the background of a bamboo grove or grass thickets. In some scenes, the panda is depicted together with a person, while there is a rather peaceful relationship between them.

In China, the panda has another name - “the hermit of the bamboo grove”. This is a rather multifaceted nickname, since the word “hermit” here implies not only the ascetic who has moved away from the world, but also a philosopher, a sage, a creative person or a great figure.

The image of the panda is in demand outside of China. So, the big panda is a symbol of the world organization for the protection of animals.