A fin whale is a mammal belonging to the order of cetaceans. They belong to the whale whale family. Feathers are very large animals. They are the second largest on the planet, second only to the blue whale. Representatives of the species can grow in length by more than 27.3 m. Their weight may be about 70 tons or more. 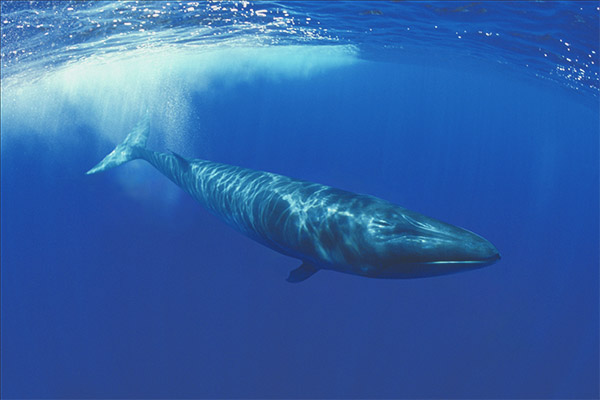 These huge mammals grow on average up to 20 m. Their weight varies between 40-70 tons. Their sizes, as a rule, depend on habitats. Individuals that live in the southern hemisphere usually do not grow more than 20 m in length. Those whales that live in the north and in the Arctic may have a dina of more than 25 m. Females are almost indistinguishable from females by their appearance. Adults of both sexes will have almost the same weight and dimensions. Sometimes the body of females is somewhat longer.

The main difference between representatives of this species from other whales is their asymmetrical coloring.In the lower jaw area, on the right side, they are white. And on the left - darker. In these animals, the base of the tail is directed upwards. The dorsal fin is curved toward the tail. Usually its length is about 50 cm. The Finval has a flat head. It is about 1/5 of the entire body length of the animal. While eating, these whales dilate the mouth. From the navel to the lower jaw they have a lot of folds. Due to them, the mouth expands. In addition, in the process of eating food thanks to them water passes through the mouth. To capture and weed out small prey, the whale uses its mustache. At finvals, it consists of several hundred plates.

Representatives of this species can be found in all the oceans of our planet. They live in open seas around the world. In summer and spring, some populations prefer to move to cooler waters. In the autumn period, the population returns to warm waters, where temperate or tropical climates prevail. Since the seasons in the terrestrial hemispheres do not coincide, the populations in the southern and northern latitudes live alternately in the equatorial region. They do not intersect with each other. Some groups of whales do not migrate.Throughout the year, they are in the same area. In the summer, individuals living in the North Pacific Ocean swim to the Chukchi Sea. Also at this time they can be found in the Gulf of Alaska and off the coast of California. In winter, they live in the Philippine, Yellow, and Japanese seas.

In the north of the Atlantic Ocean, representatives of the species live near the shores of North America, as well as around Iceland and Norway. A lot of them off the coast of Greenland. In winter, they live everywhere, from the Gulf of Mexico to Spain, as well as around the southern coast of Norway.

Those populations that live in the southern hemisphere are constantly migrating. The largest and oldest of them usually swim far to the south.

Habitat habitat for finvalov - this is a zone of polar as well as temperate climate. Occasionally they can be found in the tropical seas. Finwales live in coastal waters, as a rule, where the depth is 200 m or more.

The basis of food finvalov constitute the small inhabitants of the world's oceans. This may be squid, various fish and crustaceans. They extract food from the water by filtration. 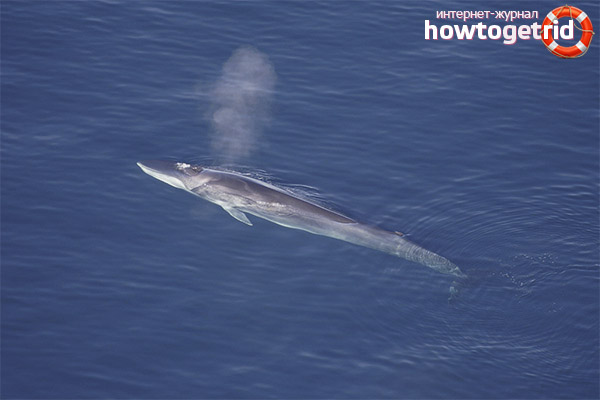 Feathers are among the most sociable among all the whales.They live in groups that represent a family of 7-10 individuals. During migration or near the feeding area, they can gather in larger groups — about 250 individuals. In spring and autumn, they prefer to migrate to cooler waters. In the fall, they return to their usual habitats where mating occurs. Finnals are known for their speed. Among marine mammals, they are among the fastest. Sometimes they reach speeds of up to 25 mph. Under the water, they are able to stay for 15 minutes, diving 250 meters deep.

Males are capable of making very low sounds. Such low frequencies are able to reproduce only some animals on the entire planet. Vocalization is the main mode of communication for the Finval. This is typical for other species of whales. The frequency of the sounds produced is 16-40 Hz. Man can not hear them.

The researchers suggest that these animals are monogamous, and during the breeding season they find a mate. It was observed that at this time they were characterized by courtship.The male begins to pursue the female, while issuing various low frequency vocalizations. These sounds are similar to those made by the humpback whale. But they are more complex. As a result of one study, it was found that only males of this species can emit such low sounds. Low-frequency sounds are used by the finwells in order to spread them as far as possible in the water column. The female can hear them even if they are very far away. Find and hear each other for them is very important, because they do not have certain mating sites. To find each other, they need such a way to communicate at a distance.

Pairing, as well as the emergence of offspring into the world falls on the last month of autumn and the very beginning of winter. During this period, populations live in warm water. Pregnancy can last 11 months or a little longer. The female produces offspring every 2-3 years. As a rule, 1 calf is born. Sometimes there are 2, but in this case the offspring is very weak, and often dies. Before a new pairing, the female finale rests for six months. If during the breeding season she does not become pregnant, she rests for about 6 months.

Representatives of the species reach sexual maturity at 4-8 years. At the same time, males grow to 18.5 m in length, and females - to almost 20 m. But their body reaches a maximum length of about 22-25 years. At this age physical individuals mature. For about six months, the female feeds her cub with her milk. The little fintail cannot suck mother’s milk in the usual way, so the mother injects it into his mouth. At the same time, she reduces her circular muscles located at the edge of the nipple. Feeding occurs throughout the day every 10-12 minutes.

On average, representatives of this species live for about 95 years. But some individuals can live even more than 100 years. 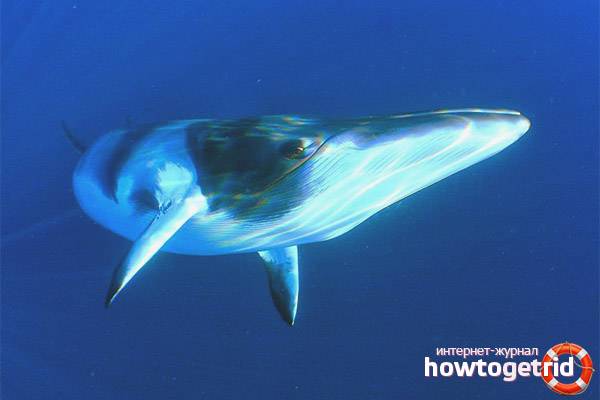 Adults do not have enemies in nature. But in the 1st half of the 20th century, these whales were mercilessly hunted by people who brought the species almost to absolute disappearance. In the 50s they caught about 10 thousand individuals annually. Young individuals sometimes become victims of large predators. They are attacked by killer whales. But since the finvalas usually live in groups, the older individuals protect them.

The contribution of finvals to the ecosystem is that they consume plankton in large quantities.A lot of parasites live on their bodies. These are various lice, worms, and also clams.

People have hunted these whales for centuries. They used all parts of their bodies that were food, fuel, and even building materials. Negative economic role for humanity finvaly not play.

Excessive destruction of the finvalov led to the fact that today their numbers have decreased significantly. They were especially actively destroyed in the 20th century, when they began to use modern whaling technologies. As a result, the population of finvalov were caught almost completely.

These animals often collide with vessels, which are seriously injured. Most often this happens in the waters of the Mediterranean. It is here that such cases are the main cause of death of whales. Along the eastern shores of the United States in 2000–2004, five such clashes were recorded that resulted in the death of animals. Sometimes the whales die on fishing nets.

Since 1976, it has been banned to catch fintails in the north of the Pacific Ocean, as well as throughout the southern hemisphere. This ban was adopted by the International Whaling Commission.The purpose of the ban is to restore the number of finvalov. In the northern part of the Atlantic, hunting was stopped only in 1990. It is noteworthy that for indigenous people who live in Greenland, there are exceptions to the fishing of these whales. In Iceland, they began to be caught again in 2006 on an industrial scale, and in 2005 in Japan for scientific purposes.