The forest lark is a small bird of the lark family, a passerine order. The more familiar name of this bird to the inhabitants of our country is like a yule In its size, this little lark is more similar to the common sparrow. The length of the body is up to 18 cm, the wingspan of the bird reaches 34 cm. Body weight is not more than 32-35 grams. 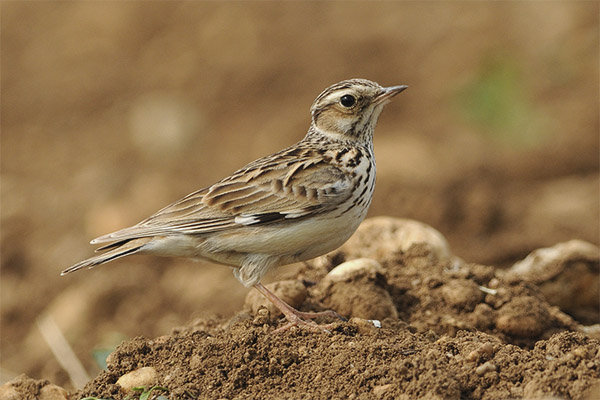 The characteristic color of plumage for this species of birds is rich brown tones. Like most species of their relatives, the forest lark also has a typical tuft on the head, formed by raising the head plumage. Outwardly, it is very similar to its relative - the field lark, but has a shorter tail. The bird is very cautious, often flies, sitting down on tree branches, shrubs, which is not a typical behavior for the majority of representatives of the larks.

General description of the species

Females and males of the forest lark practically do not have any significant differences. The plumage of the upper part of the body of the bird is ocher-brownish, adorned with long-spaced dark speckles. From the back of the head to the very eye, there is a clearly defined light band ending at the corner of the eyelid. Covering feathers are reddish or brown. The bustle of Yule is yellow, dotted with small dark specks arranged longitudinally, the tummy and undertail of a bird are white with a pleasant creamy tinge.

The color of the wing feather is dark brown, has a wide border of yellowish color at the edges. On the bend of the wing, the skylark has a characteristic combination of this species, consisting of several light and dark spots. Such a pattern is formed by combining the covering feathers of the brush. Steering feathers also have the original color - all feathers are dark, except for the middle and extreme pair, having a yellowish-brown shade.The paws of this small and brisk bird are pale pink.

From the majority of related species, the lark Yule differs in that the bird has a characteristic pattern on its head - fairly long whitish eyebrows, the end of which goes down to the corners of the eyes, as well as chestnut stains on the cheeks.

Features of the bird's voice

The trills of the forest lark are characteristic of this species of birds, quite loud and melodic, completely unlike the songs played by related species, are well remembered by ear.

In essence, a yule song is a collection of melodic and beautiful whistling phrases in the sound, which are sung by the bird simultaneously with an increase in volume and a decrease in tonality.

Most often, Yulia sings her songs while being in the air, slowly hovering in a spiral, or sitting on top of small bushes or young trees. 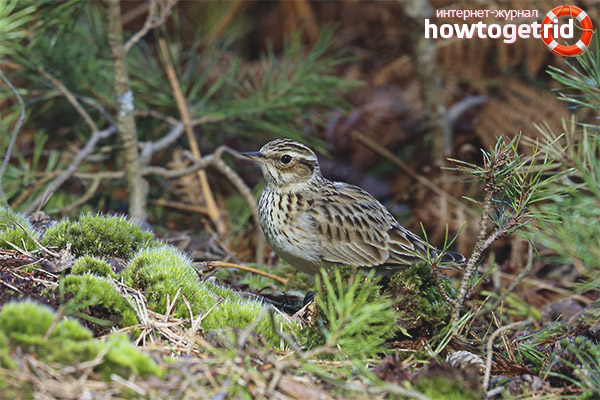 The most common population of this species of larks is in the vast territory of western Eurasia, northern Africa. Note that the forest lark is a relatively rare species of birds, and the population is constantly decreasing.The main wintering places are the Middle East, southern Europe, and North Africa.

In fact, the presented species of the larval family is the only one that is closely related to the wooded area (natural habitat). As a rule, for nesting these birds choose an area that combines dense forest vegetation and light glades with sparse grass. Often you can meet a forest lark in places of deforestation, in areas overgrown after a forest. Most prefer to live in light forests (pines, oaks) with a rather poor sandy soil.

For the construction of the nest, the hoot, like most larks, makes a small depression in the soil, which is masked by thick grass or thickets of bushes. In fact, the nest of the forest lark is a neatly twisted structure of dry vegetation, shaped like a shallow bowl, with lined moss and fluff bottom.

The average number of eggs in a clutch is up to 6. Their color is light pink with a characteristic dark specks. The duration of the period of mounting the future offspring by the female is about two weeks.

Hatching chicks have a thick downy dress in a light gray color, the mouth is yellow. A typical feature of this species is the presence of 3 dark spots in the tongue of the chick.

In the warm season, Yule eats itself and feeds the hatched offspring with small invertebrates. However, grass seed and some cereals are also included in the diet of this species.