There are many legends about wolverine, invented by people over many centuries. Often this animal was endowed with various supernatural properties. Indians living in North America, as well as residents of the taiga are wolverine with great respect, as they consider sacred animals. They are not taken to hunt him. The inhabitants of the Kola Peninsula attribute demonic properties to this animal, and in Chukotka it is often called Yeti. 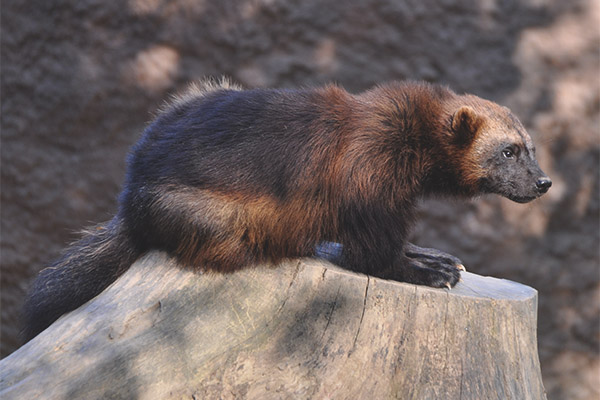 In appearance, wolverine has the features of a sable and a small bear. Previously, among the population of Scandinavia, it was believed that wolverines are not young bear cubs. They are also a little similar to martens or badgers, but still a separate species. Males on the external characteristics are almost the same as the females. The length of the body can reach 1 m. The tail is usually not less than 20 cm.The head is small, the ears are also small, rounded, almost hairless. Wolverines have a rather short body. Height - about 50 cm.

Representatives of this species have rather long and powerful paws, which is why the body of the animal looks out of proportion. The movements seem clumsy, but in fact the wolverines are very agile. They have membranes on their paws, thanks to which an animal can pass through the snow where no other forest animal will pass.

A characteristic feature of wolverine is that each individual has a unique structure of the chest cage. On paws there are powerful large claws. With their help, the beast can easily climb a tall tree, and it is also easy to get off it. But they rarely do this, being more on the ground. Wolverines are great at swimming.

These animals have a very powerful jaw, their teeth are large, sharp. Thanks to this, wolverine very quickly copes with any opponent. The animal bites through even the large bones of its enemies. During the hunt, the animal is capable of running for a potential victim for quite a long time. At the same time the animal does not even need to stop to rest.

Among animals with similar characteristics and weight, it is wolverine that is considered the strongest beast. The weight of representatives of this species is usually about 13 kg. In this case, the bear is able to enter into a confrontation with the grizzly and even a whole pack of wolves.

In winter, the animal grows coarse long wool, which perfectly protects it from frost. In the summer, his coat is shorter. There are stripes on the sides. They are white or yellowish, and sometimes gray. Wool has such good thermal insulation that even snow does not melt under it.

These animals live on the plains, as well as low-mountain taiga. You can meet them in the forest tundra and forests in Asia. There are also in Europe as well as North America. Wolverine does not like severe frosts. They usually live in an area where deep snow lies for a long time. It is very convenient for them to hunt in such a place, since wolverines, thanks to their membranes on their paws, do not fall through. In some countries, this species is protected.

Among all predatory animals, this species is the least studied. Wolverine lifestyle is very secretive.Even to see and photograph this beast in nature is a difficult task. The animal usually lives alone. It is very rare to see several representatives of the species on the same territory. 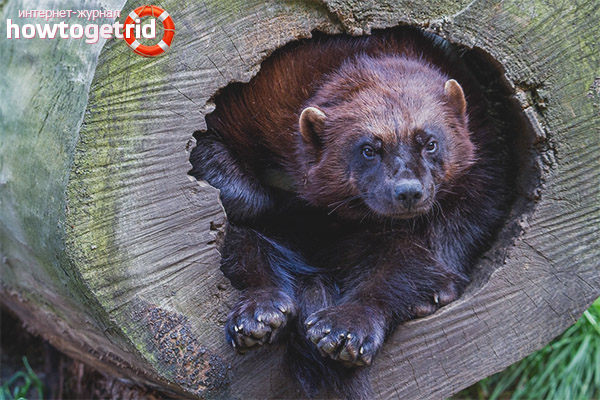 Males occupy a large territory, which for them will be controlled. It can reach several thousand km. This area necessarily marks the male. The animal walks through the area to find food for itself. Hunting, he gradually bypasses all this territory. Within a few months, the wolverine may move 200-300 km.

Predators usually stop in places where many artiodactylians live. If a beast cannot find food for itself in its habitat for a long time, it can go quite far from its usual range. Wolverine dwelling, as a rule, is located under the roots of large trees. It can be another cozy place, for example, a rock gorge. Representatives of this species usually go hunting in the evening.

In the hunt, wolverine shows great courage and audacity, it can come into opposition even with a stronger opponent. Sometimes they even fight with bears.They scare off competitors who hunt their territory, showing teeth and growling loudly. To communicate with each other, representatives of the species make characteristic sounds that are very similar to the fox barking. But the wolverine’s voice is much rougher.

In the forest, the beast is still very careful. Confrontation with such strong opponents, like a lynx or a wolf, usually avoids. The same goes for the bear. In a fight with such dangerous opponents come only as a last resort. Wolverine has no other enemies in the forest. They are most threatened by hunger. For this reason, every year a lot of animals die.

They are not at all afraid of people, but usually avoid them. If a person begins to develop any activity in the wolverine, the animal will begin to look for another territory. Sometimes, however, there are times when a wolverine attacks a person.

Residents of the tundra know that if a person came to the wolverine, then in no case should not stop. Otherwise, you can simply become a victim of the beast. They warn people who are in these places for the first time, and are not familiar with the rules of being in the tundra.

Wolverine cubs do not show aggression.They are quite easy to tame, after which they become hand animals. But in circus and zoos wolverines practically do not hold. This is due to the fact that it is very difficult for representatives of this species to be where there are clusters of people. 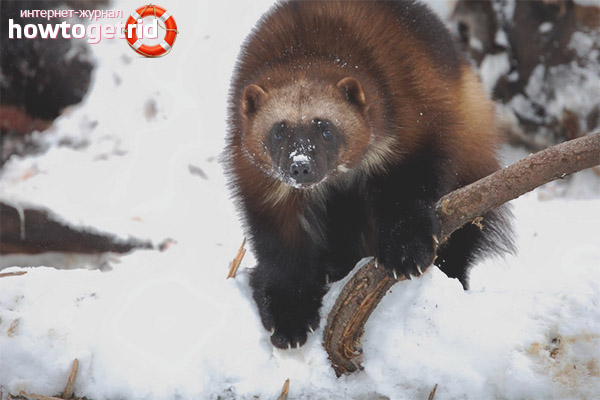 These animals are predators. In search of food, they usually travel long distances. But in the summer, their food can be plants, various berries and roots. Sometimes they even eat snakes and eggs from bird nests.

Wolverine loves to eat honey, sometimes fishes in ponds. Their food is small in size animals. These are usually foxes, hedgehogs or squirrels. But the most favorite delicacy of wolverine is ungulates. They can even defeat elk or deer. But often the victims of wolverine become young individuals or weakened by the disease.

The predator waits for the victim in ambush, then unexpectedly attacks, quickly tearing it with his teeth and powerful claws. If the animal breaks out, the wolverine continues to stalk it. They are often located near the herd of ungulates.

If possible, the beast will select prey from a fox or lynx. From a long distance, wolverine can smell the blood of a wounded animal or dig up fish out of the snow.Wolverine is a real forest guard, as it eats a very large amount of carrion. Their food is often the remains of food of other animals or animals trapped in a trap. Wolverine can eat a lot at once. If something remains, they are stocked. 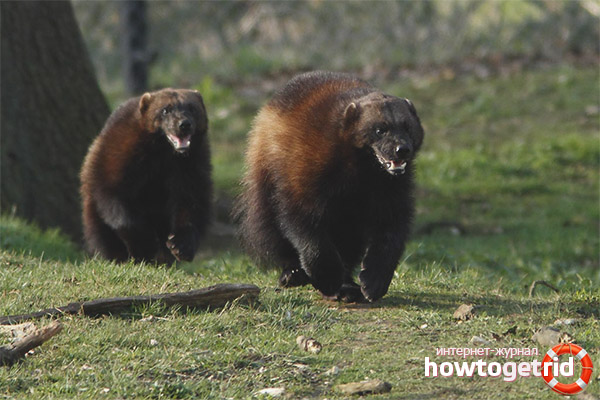 Typically, these animals do not very strictly define the boundaries of their territory, but in the mating season, everything is different. At this time, they divide their territory only with females. This period usually lasts in the second half of spring. In males, it occurs annually, in females - 2 times less. Toddlers are born at the very end of winter or in the first month of spring. At the same time, intrauterine development itself lasts a little more than a month. This is due to the fact that the egg begins to develop only when favorable conditions for this condition occur.

The young appear blind, at first they are completely helpless, their coat is very short, gray. They are born either in the den, or in the tunnel, which the female digs specifically. Usually, 3-4 babies are born, whose weight is about 100 g. Their vision appears in a month.

For several months, they feed on milk, then half-digested meat. At the age of six months, they learn to hunt. The next winter, the mother takes care of them, teaching the hunt. Males do not participate in this process, they are only near during fertilization. But sometimes he brings cubs food. One male can have more than one family, from time to time helping them. In the spring, babies begin to live independently.

In nature, representatives of the species live about 10 years, in captivity - about 16.